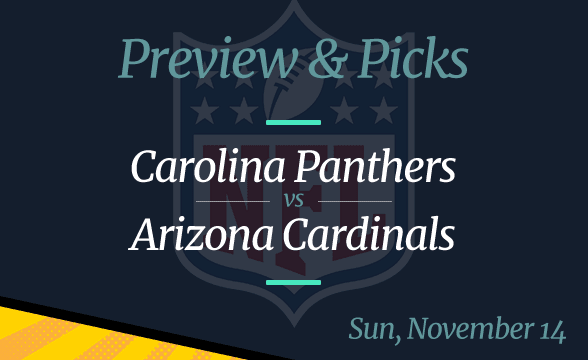 The Arizona Cardinals are seen as a clear favorite in the Week 10 game against the Carolina Panthers. The main reason is that this team is 8-1 on the season, which is the best record in the NFL. Another reason why oddsmakers expect the hosts to win is that the #1 MVP candidate quarterback Kyler Murray is back after missing one game.

Then, there’s also the thing about Carolina’s offense. P.J. Walker is named the starter, a guy who’s previously started only one NFL game. The Panthers’ offense might be in trouble, but their defense definitely looks strong enough to cause problems to the opposition.

All odds are per FanDuel as of November 12.

Kyler Murray Expected to Return for the Cardinals

The Cardinals are back on the winning track – after suffering their first loss of the season in Week 8, they bounced back with a Week 9 win. The game in question was against their divisional rivals, the San Francisco 49ers, which the Cards won 31-17.

The most impressive fact about that game is that Murray did not play. Arizona’s quarterback picked up an injury a week before during the loss to the Green Bay Packers, which meant that backup Colt McCoy had to take his place. Many believed that it would mean trouble for the Cardinals, but their offense did great.

Still, despite playing great against the Niners, McCoy will have to go to the bench in the next game, the reason being that Murray is back. The bad news for the Cardinals is that there are still a couple of players who will likely miss the Week 10 game, most notably, DeAndre Hopkins and A.J. Green, two of Arizona’s best receivers.

The biggest news coming from Carolina is that they’ve signed Cam Newton, who used to be their quarterback for nearly a decade. The 2015 NFL MVP, however, will not start the Week 10 game, but neither will Sam Darnold, who’s been their starting QB so far. The 24-year-old suffered a shoulder injury which will keep him off the field for at least four weeks.

With Darnold injured and Newton still not ready to make his second debut, the role of the Panthers’ QB is handed to Walker. The 26-year-old who’s started only one NFL game in his career isn’t expected to do wonders for the Panthers against the Cards.

It seems that their coaching staff knows that the only way to get something out of their trip to Arizona is to focus on the defense. The good news for the Panthers is that the Cardinals will be without two of their most productive receivers. Knowing that Carolina has the NFL’s second-best passing defense, they should be able to do well in that aspect.

With that being said, it’s only logical to expect a low-scoring game. Neither team should score a lot, but Arizona will probably score slightly more than Carolina.

Picks: Arizona Cardinals to win but not cover the 10.5 spread; under 44 is likely to win