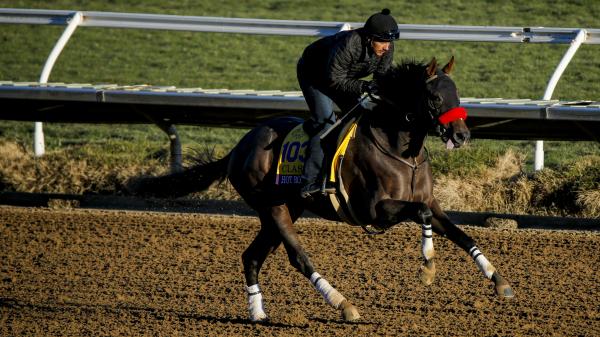 Patrick O’Neill, nephew to two-time Kentucky Derby-winning trainer Doug O’Neill and bloodstock agent Dennis O’Neill, had a different interest from most college kids when he was an undergraduate student and a member of Brown University’s football team. He insisted on adding TVG to the fraternity house’s cable television package; he was the one who watched horse racing at every opportunity, including in class, and in film study prior to practice.

O’Neill’s infectious enthusiasm about the sport and “family business” eventually resulted in an interest being taken by his close friends who graduated with him in 2015. With their professional careers underway, they were looking for an activity that would keep them connected and add to the great times they had already enjoyed together.

Boat Racing took a minor but still significant financial stake in Hot Rod Charlie, the third horse they ever owned, joining Roadrunner Racing (Greg Helm) and Bill Strauss. Hot Rod Charlie won the Twinspires.com Louisiana Derby and cemented his status as one of the nation’s top 3-year-olds with a third-place finish in the Kentucky Derby Presented by Woodford Reserve and a solid second after he laid down torrid fractions in the Belmont Stakes Presented by NYRABets. He later crossed the finish line first in the TVG.com Haskell Stakes, but was subsequently disqualified and placed last for a traffic incident in mid-stretch, and then subsequently won the Pennsylvania Derby at Parx Racing.

O’Neill has written a regular diary with Tom Pedulla for America’s Best Racing since Hot Rod Charlie burst onto the scene by running second in the $2 million TVG Breeders’ Cup Juvenile Presented by Thoroughbred Aftercare Alliance at 94-1. Here is their installment ahead of the $6 million Longines Breeders’ Cup Classic on Saturday at Del Mar.

When I think back to the last Breeders’ Cup and everything that has happened since then, what an amazing, inconceivable ride it has been with Charlie.

When we arrived at Keeneland last year for the Juvenile, as much as we wanted to believe in our boy, it was hard to imagine, frankly, even being in the money in that race. He had just broken his maiden on his fourth try. He was going against a field loaded with much more accomplished opponents – top Kentucky Derby hopefuls with much better pedigrees that had not only been exposed to graded stakes competition but had won. We knew it was deep waters, but we reasoned that if he could run in the top 5, we could break even, and we would be able to create a memory that each of us would never forget – the primary reason we started Boat Racing, LLC.

Charlie, of course, far exceeded our hopes. He missed by three-quarters of a length to Essential Quality in the Juvenile, but everyone knew we would need to see more to be sure our horse was more than a one-race wonder. After a layoff, he backed up the Juvenile with a solid third in the Robert B. Lewis Stakes at Santa Anita at the end of January. Our camp felt that was a sneaky good performance – first start after a 90-day layoff, going a mile and a sixteenth with two great horses inside and outside of him, and never giving up the entire way down the lane despite an extremely deep, tiring track.

We were proud of him, but knew he would need to take a step forward to have any chance to get in the gates in Churchill Downs on the first Saturday in May. Thinking back at this time, I chuckle how we would continue to catch ourselves that we were nuts to ever think or even be talking about potentially running in the Kentucky Derby, consistently mentioning that “It can’t happen to people like us.”

After a great huddle among Roadrunner Racing, Bill, and Team O’Neill, we felt the Louisiana Derby hit all the boxes for taking a shot to get into the Derby, and Charlie put it all together with a front-running victory – punching our ticket to historic Churchill Downs. Although it was surreal and a pinch-me moment that we were heading to the Kentucky Derby, we knew deep down that Charlie had a legitimate chance. We knew he was training incredibly, but also we knew he would relish the added distance.

He did, once again, run his eyeballs out and gave us – and our 160-people-strong contingent – a thrill on the far turn that I will never forget until the day I am no longer on this planet. Each one of the Boat Racing guys laugh that we fully plan to be those old grandpas that tell the same story over and over to our grandchildren in 50 years. This will be that story.

Charlie then kept the train going by coming out of the Kentucky Derby better than you could have ever thought, which is why we opted at the last minute to run in the famous Belmont Stakes in Elmont, N.Y. Charlie showed tremendous heart to be second to Essential Quality, a true champion, and it was great to finally see him get additional admiration for the torrid fractions he threw down, while continuing to battle on every step of the way.

Most people view the Haskell as probably our lowest low. We clipped heels with Midnight Bourbon and, instead of achieving our first Grade 1 victory, we were disqualified and placed last. Funny enough, none of the Charlie team ever felt in the dumps about that experience. Having a great team among us all with an aligned perspective – love this amazing sport, blessed to have Charlie, and win-or-lose we’re going to have fun – made it extremely easy. Honestly, we simply felt bad for Charlie, because he had run a winning race and deserved to be a Grade 1 winner discussed among the best of the class. That is why we felt more relieved after Charlie’s spectacular win in the $1 million Pennsylvania Derby, which takes us to where we are now.

We could never have imagined a year ago that we would be viewed as one of the top contenders for the Breeders’ Cup Classic, but here we are. I have been in this sport since the time I remember opening my eyes and I certainly did not think that my family would ever be a part of a Kentucky Derby win (e.g. Doug and Dennis won the Kentucky Derby with Reddam Racing in 2012 with I’ll Have Another and in 2016 with Nyquist), but I most certainly did not ever think I would assist my uncles in this incredible “family business” with a horse in the pinnacle race for all Thoroughbreds.

As always, when you have a horse like Charlie, you are always optimistic, especially since he won’t have to ship across the country to run for the first time since January. Team O’Neill has done everything possible to have him ready for his biggest moment. Words cannot describe how indebted we are to my uncle Doug as the trainer, assistant trainer Leandro Mora, exercise rider Johnny Garcia, groom Eddie Barron, and uncle Dennis who masterfully picked him out at auction as a yearling. They have all done an incredible job in getting Charlie to continue to fulfill his potential.

Team O’Neill is matched only by the quality of the partners we have. Roadrunner Racing and their managing partner, Greg Helm, and Bill Strauss, who have both been great mentors to us, as well as a blast to be around. They are all class and it has been great to follow their lead. They even matched our thoughts to donate one-sixth of all Charlie earnings to charity, which, at the end of the day, is truly all that matters. We all know that we are extremely blessed to have had this experience and all agreed that it is important we find a way to do something that is more important and beyond ourselves.

I watched Charlie’s last work for the Classic, when he went seven furlongs in 1:26.80 last Saturday at Del Mar with Flavien Prat, his world-class jockey, aboard. I could not think of a more perfect work. Charlie is as fit and ready as he will ever be. As Prat and our entire team said when he hopped off, we will have no excuses.

I believe the outcome will depend largely on how the race unfolds, as there are so many world-class horses. Knicks Go, Medina Spirit and Art Collector are all quick, while Essential Quality has an amazing stride over a route of ground. We are fortunate that one of Charlie’s talents is his versatility. He can either be on the lead or sit off the pace. I could see him on the flank of Knicks Go if we catch a flyer out of the gate or sitting five lengths back in the garden spot if they decide to go quick early.

When you have Flavien as your jockey, you simply trust in his instincts and amazing talents that we will get a good trip regardless of what the other horses decide to do. Who knows? It might again come down to whether we can hold off Essential Quality, just as it did a year ago at the Breeders Cup at Keeneland. Talk about full circle. Talk about a movie-like ending to this year.

After these extraordinary last 12 months, Charlie has taught us that we’re not foolish to believe in the impossible. But whether the impossible happens or not, we have memories of this past year to talk about as grandpas for the rest of our lives. Thank you, Hot Rod Charlie!