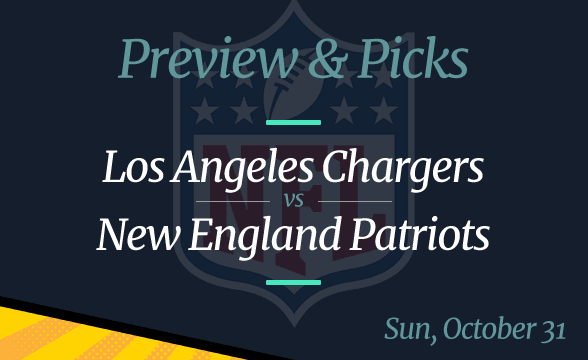 Last weekend, the New England Patriots obliterated the Jets 54-13, which was their biggest win since December 2020. The team they demolished 45-0 back then was the LA Chargers.

Is it time for the LA team to get its revenge? Oddsmakers think so ahead of their Week 8 clash.

All odds are per DraftKings as of October 28.

Chargers Ready for the Payback

The Chargers had two weeks to prepare for the game with the Patriots due to a bye in Week 7. It’s very likely that they’ve been working on improving their defensive play. With 150 points allowed in six games, their defense is among the league’s worst.

The biggest issue is that their defensive form seems to be on a downward path. In the two previous games, they conceded 76 points.

Their passing defense has been okay, but they rank bottom when it comes to run defense, namely in total allowed yards and yards given up per carry.

The bad news for the Chargers is that the Patriots’ running backs have been playing superb football lately.

The Patriots destroyed the New York Jets in Week 7, scoring 54 points along the way, which was their best offensive performance in years.

Rookie quarterback Mac Jones had a vintage game, going 24/36 for 307 yards. Two of his throws resulted in a touchdown, while the backup QB Kendrick Bourne also threw a touchdown pass.

That was the third straight game with Taylor recording a rushing touchdown. So far, he has a total of five TDs to his name.

Offensively, the Pats look really good – they’re on a series of three games with 25+ points scored. Their defense hasn’t been that great, although they did hold the Jets to just 13 points last weekend.

Sure, the Jets are horrible in the offense, with just 80 points in six games. They probably aren’t going to be able to do the same against the Chargers.

Still, we probably aren’t going to see them concede more than usual. They’re conceding 20 points per game, a stat that probably isn’t going to be tarnished in Week 8.

With all that said, the best betting option seems to be backing the Pats not to lose by a too large margin.

2021-10-31
Previous Post: International Horses You Need to Know For the 2021 Breeders’ Cup
Next Post: Mike Postle Tried to Enlist Two Other People to Help Him Cheat Claims Veronica Brill