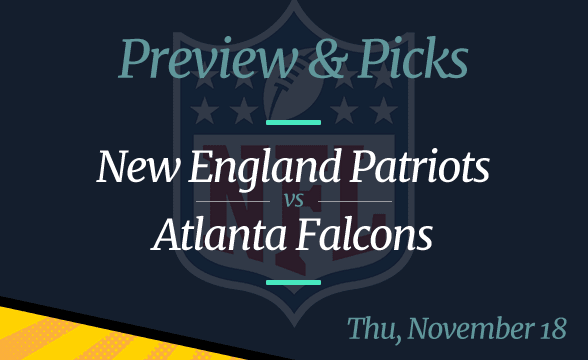 Thursday Night Football takes us to Georgia, where the Atlanta Falcons will welcome the New England Patriots at Mercedes-Benz Stadium. The two rivals have met on seven occasions in the 21st century and the Pats won each time. This includes the win in Super Bowl LI in 2017 when Tom Brady won the MVP award.

Nearly five years later, Brady is no longer in New England, but the Patriots seem to have a suitable replacement for him. The man in question is rookie QB Mac Jones whom we saw throwing for three touchdowns last Sunday during the 45-7 blowout win over the Cleveland Browns.

Jones and the Pats would like to continue to play well and extend their winning streak to five straight games. Is there a way the Falcons could ruin their plans? Let’s see!

All odds are per DraftKings as of November 15.

The Patriots are second in the AFC East with a 6-4 record. The team that’s at the top of the table is the Buffalo Bills with 6-3. The two rivals still haven’t met in 2021, meaning that the race for the divisional title is pretty much open. The team that does better in those two games will probably win the AFC East.

Not winning the division would not be a disaster as the Patriots would still be able to challenge a Wild Card berth. They’re currently the fifth-best team in the AFC, which means that the chance they’d get to the postseason is pretty good.

However, the season is long and they need to continue playing well. The good news is that their form is fantastic. This team has won their previous four games, scoring a total of 150 points along the way. They also conceded only 50 points over that period – better than any other team in the AFC.

The bad news is that their schedule will get ugly in a few weeks. Actually, the Week 11 game against the Falcons might be the easiest of their remaining seven games.

The Falcons are 4-5 on the season, with just one win fewer than the Tamp Bay Buccaneers, who are at the top of the NFC South Table. What this means is that the Falcons still have a chance to win the division.

Although it’s possible in theory, such a scenario doesn’t seem very likely to happen. Their schedule in the remainder of the season doesn’t look too difficult, but the Falcons’ form is pretty disappointing. This team is coming off a 43-3 blowout loss to the Dallas Cowboys in Week 10.

Their defense was horrible in that game, but their main problem throughout the 2021 season has been their offense. With just 178 points scored in nine games, they’re among the worst teams in the league. Their offensive stats might get even worse after Week 11 when they face the league’s second-best defense.

Picks: New England Patriots to win and cover the spread; over to hit