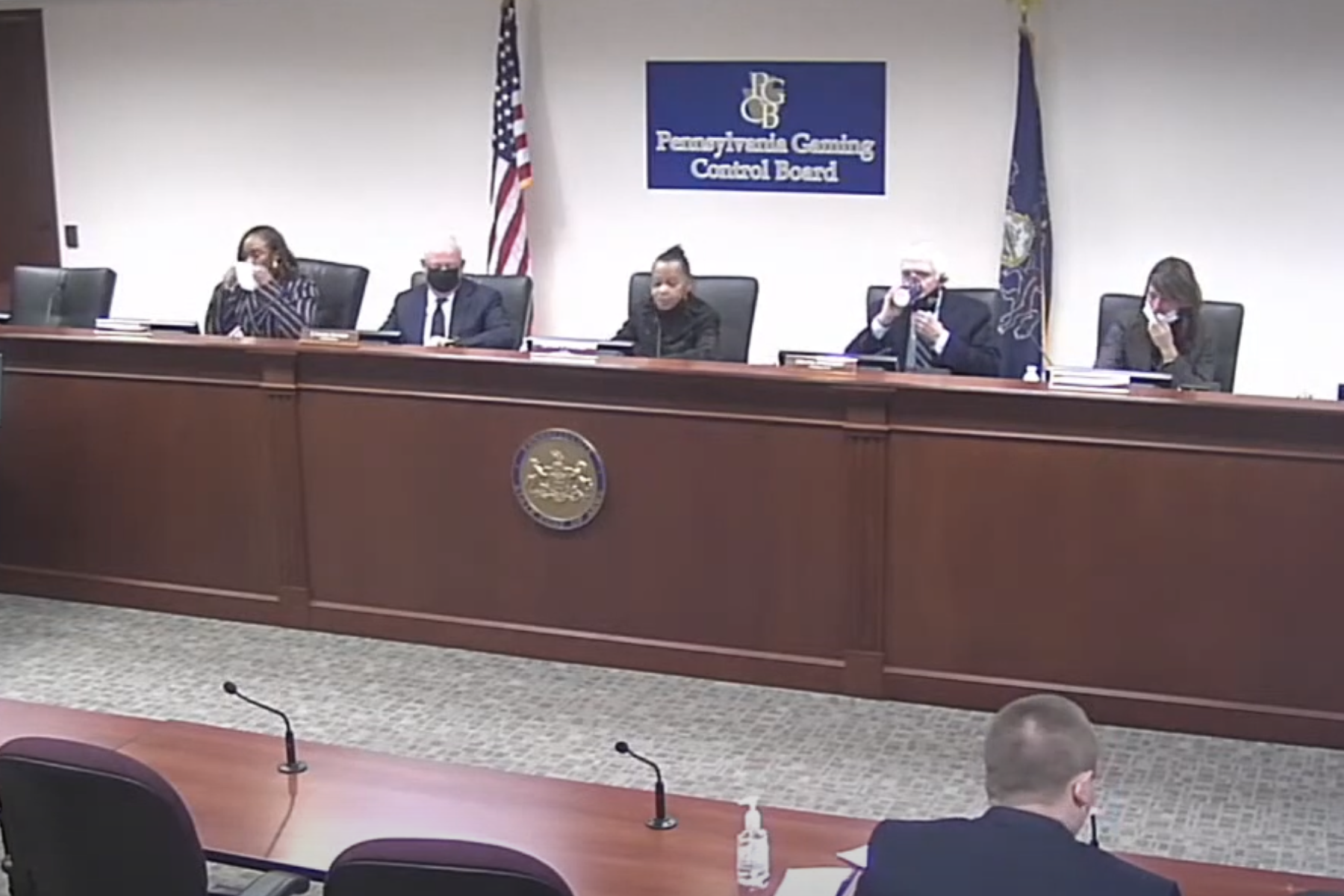 The Pennsylvania Gaming Control Board (PGCB) voted at its monthly meeting Wednesday to banish four people from all of the commonwealth’s casinos after they were caught gambling while leaving one or more children unattended.

Members of the Pennsylvania Gaming Control Board meet Wednesday in Harrisburg. Among the actions commissioners took at Wednesday’s meeting included putting four individuals on the Involuntary Exclusion List for leaving kids unattended while they played on the casino floor. (Image: PGCB/YouTube)

They were among 10 people PGCB commissioners voted to place on its Involuntary Exclusion List at the meeting. The list is maintained on the Board’s website and includes “career and professional offenders, cheats, and other individuals whose participation in that form of gaming would be inimical to the interest of” Pennsylvania or the gaming industry.

The list contains hundreds of names for people no longer allowed to enter Pennsylvania casinos. Of those individuals, 133 were included for child abandonment issues.

In making these decisions regarding the four adults, the Board is reminding the gambling public to not leave children unattended in the parking lot or garage, a hotel, or other venue at a casino,” the PGCB said in a statement. “This irresponsible behavior will not only lead to the possible exclusion from all Pennsylvania casinos and criminal prosecution but more importantly may result in harm to the unattended child.”

The individuals named by the board were served with a notice by the PGCB Office of Enforcement. None of them responded within 30 days of that service allowing state officials to proceed with the default judgements.

Michael Glenn kept his two children, ages 10 and 11, in a vehicle in the parking lot of Rivers Casino Philadelphia while he went into the casino. Security discovered the children roughly 20 minutes after he entered the facility, where he was placing sports bets at a kiosk.

Authorities did not charge Glenn, but Rivers officials permanently banned him from the casino.

Shanae Howard also left her 5-year-old child in a car in the Rivers Philadelphia lot. According to the PGCB, the kid was in the car for about 30 minutes before security approached after being tipped by a casino patron. She was playing a slot machine when she was ejected from the casino permanently.

Charges are pending against her.

Commissioners placed Zachary Bohinski on the list after he left a 3-year-old and a 1-year-old in a running car at the Live! Casino Pittsburgh for nearly a half-hour while he ordered food and played slots. Three patrons found the children unattended.

State police charged Bohinski, identified as a pastor, with two counts of child endangerment. He, too, was permanently banned from the casino.

Some casinos have started taking extra steps to keep children safe. Boyd Gaming in November said it would install infrared cameras at its Valley Forge Casino Resort to help avoid a potential tragedy.

Edwin Reyes was staying at the Mount Airy Casino Resort when he left a 5-year-old in the room for more than two hours one night. He spent more than 100 minutes of that time on the gaming floor playing table games.

Upon returning to the room, Reyes could not find the child. He then went to the front desk, reporting a missing child. Security made it to the room in five minutes, and by that time, Reyes told authorities that the child had been sleeping in bed under the covers.