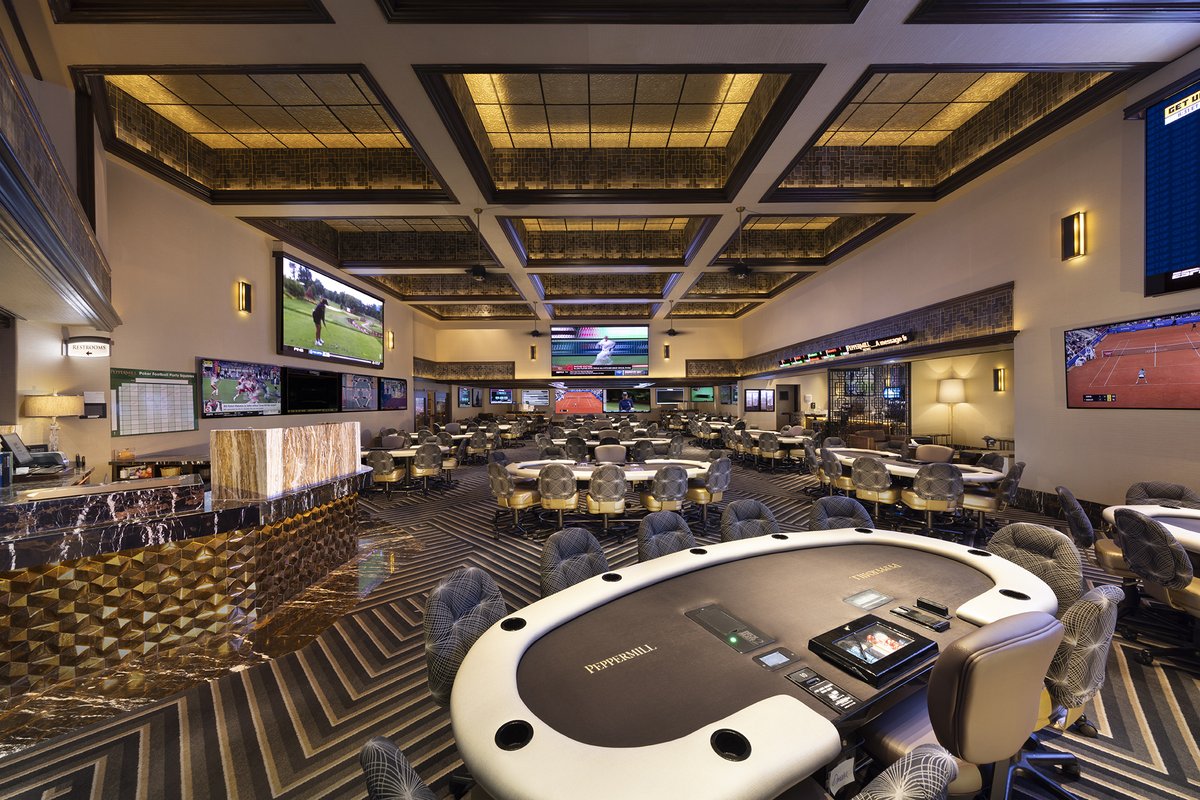 After a three-year hiatus, the fall tournament series built on the theory that poker should be all about fun returns to Reno’s Peppermill Resort Casino starting on Friday.

“This a relaunch of all of our tournament series’ and we’re bringing back everything. We’re hoping for a really big turn out and a lot of fun,” said Mike Nelson, Peppermill’s poker director. “We really can’t wait. We’re super-excited. It’s been a long time.”

Capped by an $880 three-day main event with a $300K guarantee, the series also features a number of smaller buy-in events and daily satellites. While poker is the draw for many, it’s not the only reason players and their families are almost guaranteed to come away from the Peppermill with a huge smile.

Peppermill has held this unique series in the spring and fall for 10 years, but the pandemic caused its cancellation even though its poker room reopened — short-handed with plexiglass dividing the players — as soon as Nevada allowed.

Bringing the event back now is just one way organizers strive to do their best to provide players and others with entertaining time, both at and away from the poker table.

“We try to create this really fun encouraging environment with a lot of good poker involved,” Nelson said, noting that the cornhole boards had just arrived. 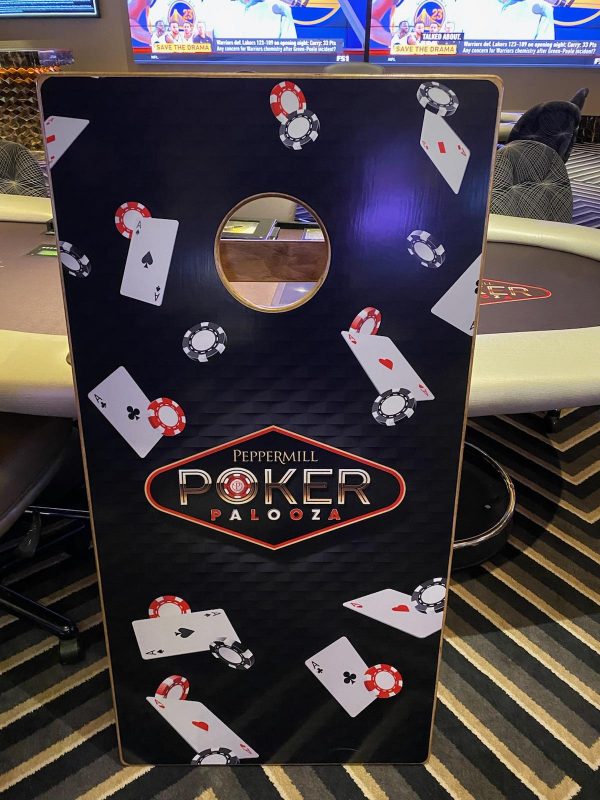 The cornhole sets have entered the building. (Image: Mike Nelson)

Yep, a cornhole set branded for the series. Tournament players will be randomly selected to try to win $100 poker chips by sinking a bean bag into the hole.

Winners can buy a round or two at the Tuesday night karaoke party, which has become one of the highlights of the bi-annual poker series since its beginning. They’ve gotten more than 200 warblers in the past.

“It’s not like we have a bunch of professionals, although you’d be kind of surprised, there are a bunch of good singers,” Nelson said.

Nelson has emceed the party before, but will leave it to a professional this year. Instead, he will hold a hypnosis demonstration on Thursday, Oct. 27, at 10:30 a.m.

In addition to being a decade-long veteran of the poker industry (and before that, a pro player), Nelson is also a hypnotherapist. He’ll give a seminar titled “Understanding Tilt” where he promises to help players recognize and defend against tilting.

Other perks offered by the Peppermill include a welcome dinner for players on Monday at 6 p.m., free breakfast for anyone who makes it past the first day of the $550 mini-main opener ($100K guaranteed) and the $880 Main Event ($300K guaranteed), and a costume contest party on Halloween.

A dozen event winners will get a championship medal. 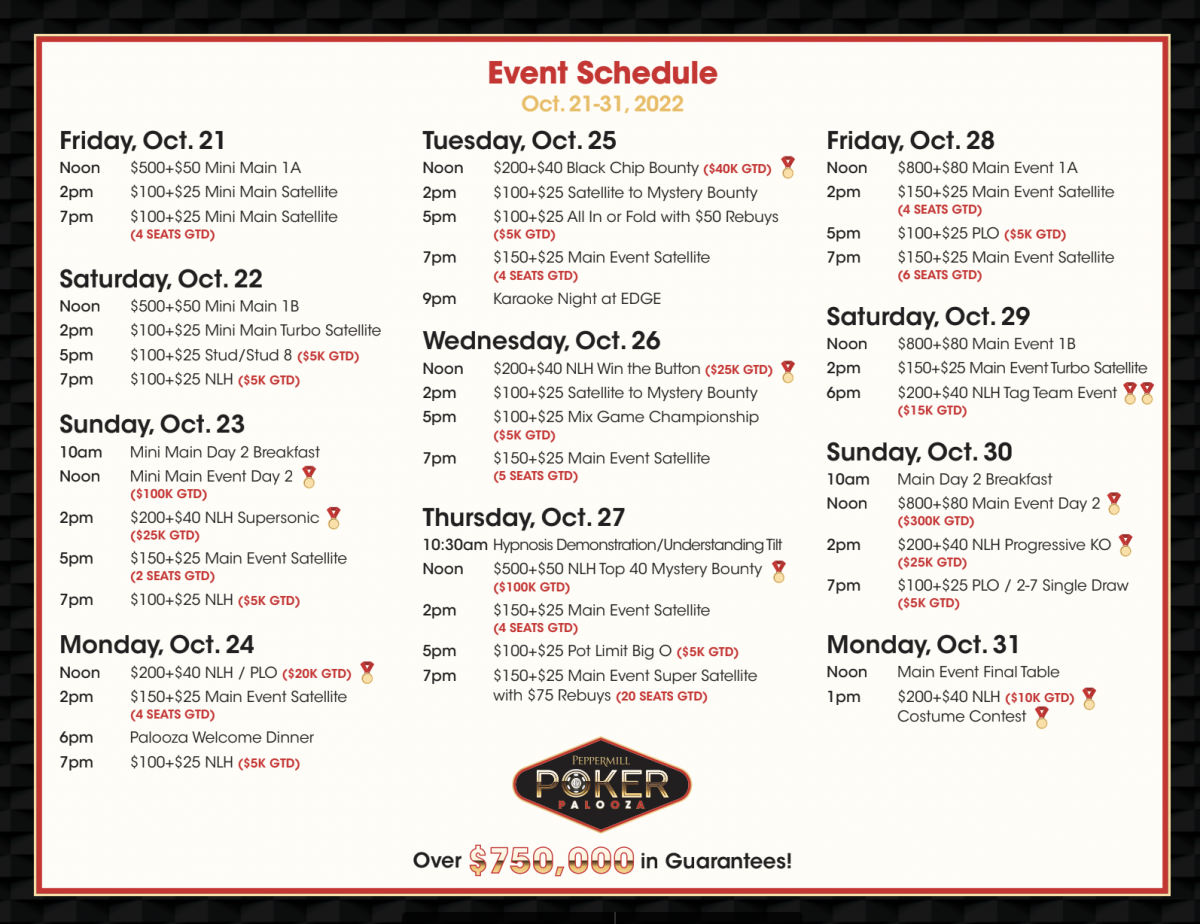 “Until you come play this, it’s kind of hard to believe it’s true. It’s a really well-run event that’s a blast,” Nelson said.