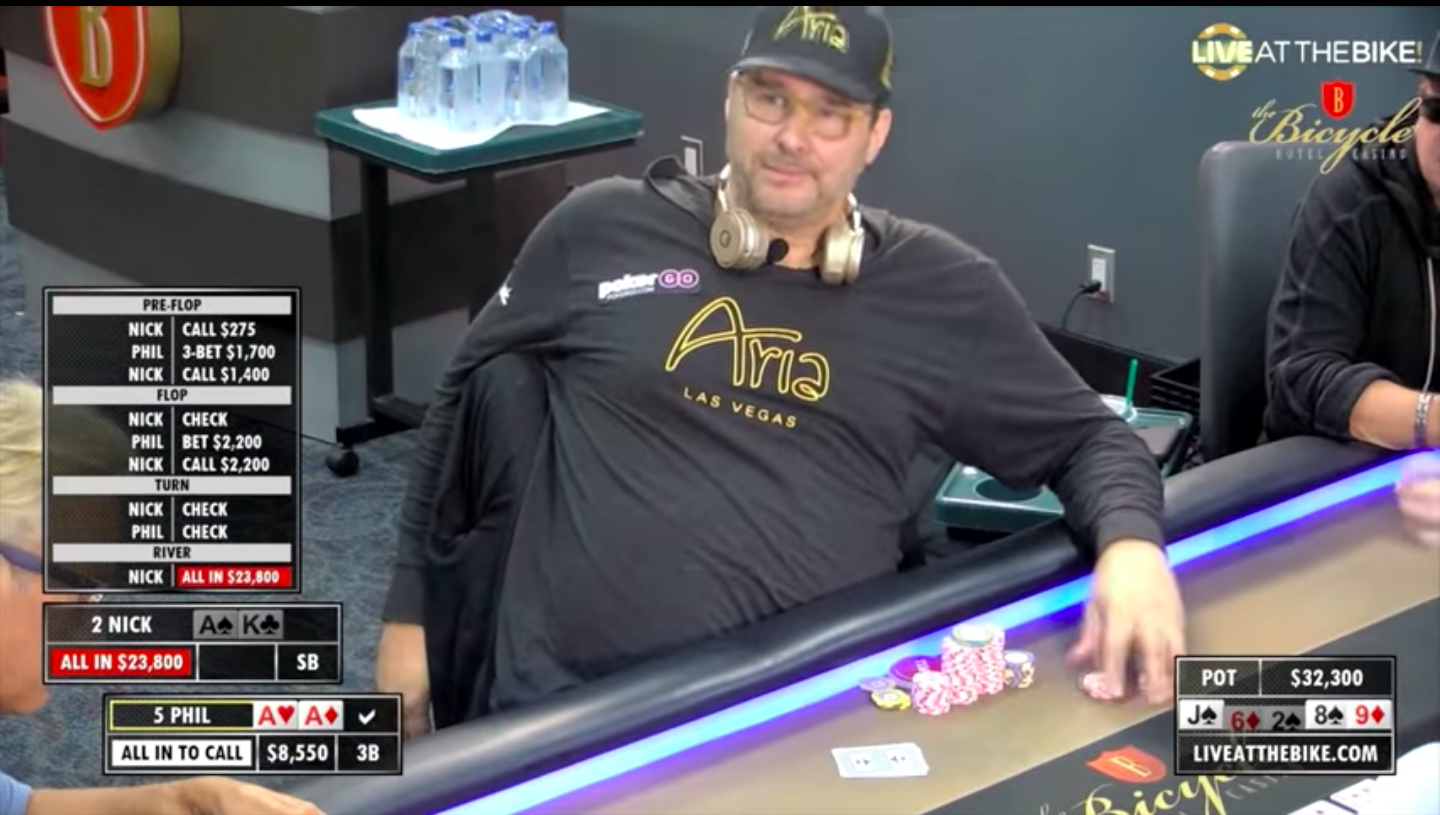 The traveling circus that is the World Poker Tour is making its way to LA’s Bicycle Casino for its popular Legends of Poker event that regularly draws some of the biggest names in the game to Southern California in search of poker glory.

And, what’s a circus without a sideshow? That’s where Phil Hellmuth comes into the picture as the headliner of a series of live cash games that will be streamed on “Live at the Bike” from Wednesday, Aug. 24 through Friday, Aug. 26.

While exact lineups for the show haven’t yet been decided, Mike Matusow, Chance Kornuth, and businessman and high-stakes cash game player Bill Klein have all reportedly agreed to make appearances on the live stream.

Premiering in 2005, “Live at the Bike” effectively started the trend of live streaming cash games to interested viewers online. Throughout its 15-year run, the show has regularly highlighted some of the biggest names while, at the same time, featuring some of LA’s most colorful amateurs from its television table located in a corner of the poker room.

Live at the Bike was bought by Bally’s Cooperation in late 2021, and the stream room underwent heavy renovation. After months of preparation and investment, the show relaunched on April 30. However, the stream was immediately criticized on Twitter for poor quality and terrible lighting.

not even trolling, but is live at the bike playing in the dark on purpose?

Live At The Bike look like it’s filmed in a closet….very dark room

Sub-standard lighting aside, Hellmuth will undoubtedly find a way to steal the spotlight when he ante’s up with a variety of professionals, deep-pocketed amateurs, and social media influencers under the watchful gaze of the “Live at the Bike” cameras.

“Live at the Bike is excited to have Phil Hellmuth week,” the stream’s producer Producer Wayne Chiang told CardsChat. “The 16-time WSOP bracelet winner has shown haters he can still dodge bullets, and in a live stream where you can’t hide the hands you mess up, tune in to see if he can still play flawlessly in 2022.”

In addition to Kornuth, and Klein, Chiang says a number of other notables are lining up to take their shots at Hellmuth. Headlining those names are Maria Ho, three-time WPT winner and controversial player Chino Rheem, and Hellmuth’s good friend and four-time WSOP bracelet winner Mike “The Mouth” Matusow. Matusow and Hellmuth appeared together on the show in 2019, where Hellmuth infamously stormed off the set after getting bluffed off of pocket aces.

Hellmuth’s most recent live stream appearance took place at a rival LA casino in May 2022 where he was accused of angle shooting against professional Twitch streamer and amateur poker player Slime. In a hand where both players flopped top pair with aces, Hellmuth apparently folded to his opponent’s shove. When Slime turned over his weaker ace to claim the pot, Hellmuth claimed he hadn’t actually folded.

Hellmuth suffered further incidents and blowups throughout the remainder of that session, including this hand against his friend MrBeast.

There’s no word on whether any of those influencers will make appearances on “Live at the Bike,” but there are sure to be plenty of laughs and fireworks if they do.

Blinds for the session haven’t been announced, though Hellmuth tweeted that they’ll likely be set at $100-200. “Live at the Bike” streams Tuesday through Friday starting at 3pm PT.

2022-08-19
Previous Post: Can Cincinnati Make It Back to the Super Bowl?
Next Post: Pair of Win Contenders Stands Out in Full Field for Del Mar Oaks