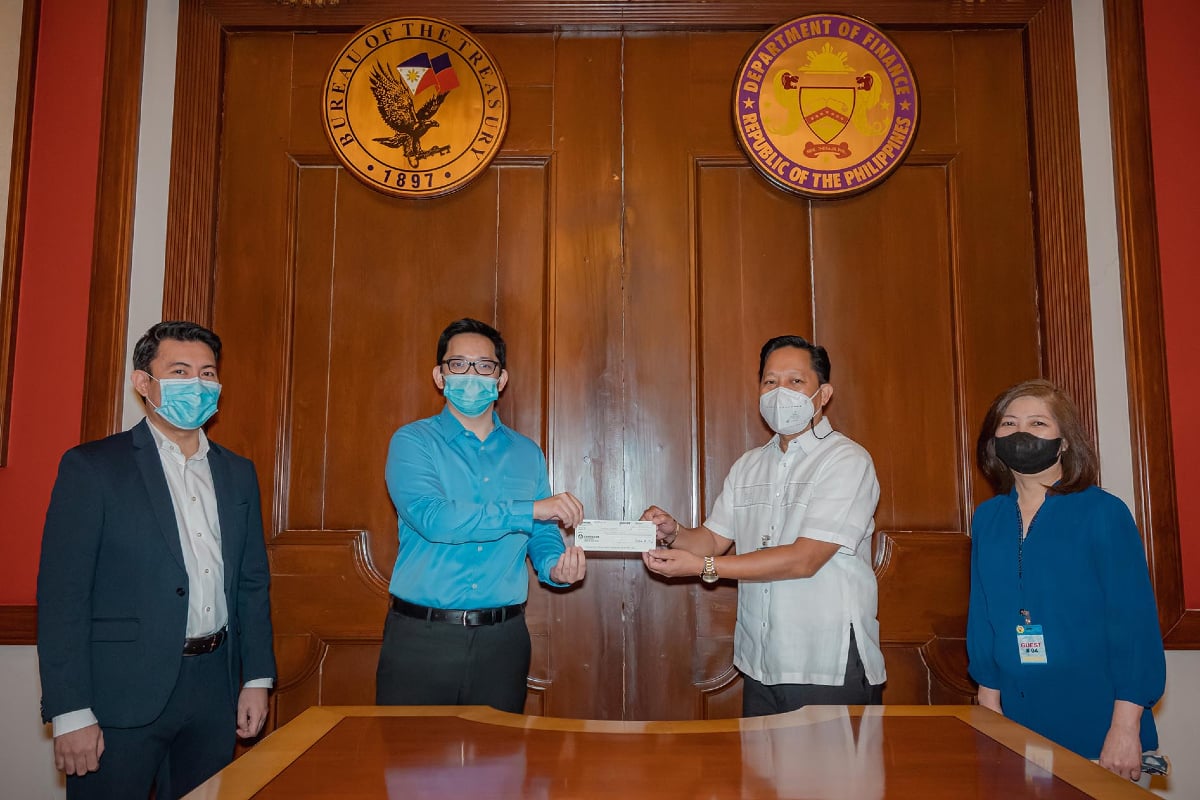 A check for $120 million generated by Philippines casinos is handed over by Philippines Amusement and Gaming Corp.’s VP of Finance Recto Baltazar, Jr. to Deputy Treasurer Ed Mariño on April 11, 2022. PAGCOR is required to direct 50% of its annual earnings to the Philippines government. (Image: PAGCOR)

PAGCOR, a gaming regulator and operator, this week announced it directed PHP6 billion (US$120 million) to the Philippines Bureau of the Treasury. The funds are net earnings collected by the gaming agency for 2021.

Prior to the pandemic, PAGCOR was one of the Philippines’ largest tax revenue generators. The gaming corporation traditionally trails only the Internal Revenue and Customs bureaus in terms of annual tax revenue for the republic’s government.

The roughly $120 million remitted this week from PAGCOR represents 50% of the agency’s 2021 earnings. Under Filipino law, PAGCOR is required to submit half of its annual net revenue to the national government.

We are gaining momentum towards economic recovery as all businesses, including the gaming industry, are now on full operational level and revenues start pouring in once again. This enables us to fulfill our financial obligations with the government and to remain committed as one of its major partners in nation-building,” Domingo said.

However, Philippine casinos — both commercial properties and those owned and operated by PAGCOR — remained much suppressed last year. Ongoing COVID-19 spread resulted in President Rodrigo Duterte’s administration ordering the casinos to close and/or operate at reduced capacity for much of the year.

PAGCOR revenue totals submitted to the government in pre-pandemic years highlight the long road to a full recovery that remains ahead. The gaming regulatory submitted PHP18 billion to the National Treasure for 2019 — meaning the industry last year experienced only a third of the gross gaming revenue it generated in 2019.

The bulk of the PAGCOR revenue comes from the four integrated casino resorts in the Manila metro. City of Dreams, Okada, and Solaire are in the capital’s Entertainment City district, while Resorts World is in the city’s downtown proper.

Duterte’s six-year term is up in June. The presidency in the Philippines is limited to a single term. Filipinos will decide their next leader during the May 9 national election.

Philippines Senator Bongbong Marcos — a member of the Federal Party of the Philippines — is the betting favorite. Marcos is campaigning with Davao City Mayor Sara Duterte as his running mate. Duterte is the daughter of the sitting president.

The best-known challenger is internationally recognized boxer and current Sen. Manny Pacquiao. The global sports icon is running on the PDP-Laban party ticket, which is the party of the president. Duterte has pledged not to endorse a candidate to succeed him.

The online political betting exchange PredictIt gives Marcos an 87% chance of winning the May presidential election.

Duterte has endured a mixed relationship with gaming. After taking office, the controversial leader said gambling has “deleterious effects,” and should be limited to the “barest minimum.” However, Duterte later softened that tone and took a different approach to gaming and casinos after discovering the critical importance that PAGCOR tax revenue plays in the country’s nation-building goals.