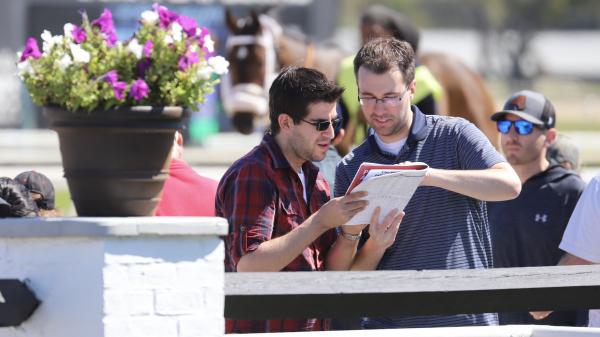 Piassek’s Plays: Looking to the Future at Tampa Bay Downs

#7 Chrome Savage: The Saturday card at Tampa Bay Downs features only 2-year-old races. This race is for 2-year-old maiden fillies going six furlongs on dirt. I’m looking for a horse who showed some signs of life in their debut and is poised to run a big race second time out.

Chrome Savage made her debut at Gulfstream Park on Sept. 3 in a six-furlong dirt race. She drew the extreme outside post and was further compromised at the start when she broke slowly. The top three horses sprinted well-clear of the rest early on, and by the time they turned for home the leaders had built up such an advantage that they were impossible to catch. Chrome Savage managed to outkick the rest and closed to get fourth. She’s had some time off since that race and has had several good workouts, including a workout from the starting gate. That’s important for a horse who broke slowly in their first start. Antonio Gallardo, historically one of the top jockeys at Tampa Bay, gets in the saddle. If she breaks cleanly, I’m expecting a much-improved effort out of Chrome Savage at a big price.

#7 Old Town Road: The co-feature on the card is the Inaugural Stakes, featuring a field of ten 2-year-old males sprinting six furlongs. Many of these have run impressive races with big speed figures so far in their career. The key to finding the winner in this race is trying to figure who is most likely to move forward.

Old Town Road is a perfect 3-for-3 lifetime. He won a $50,000 claiming race at Keeneland last out as the odds-on favorite. In that race, he sat just off the pace, made a professional move to the lead, and drew off to win by 4 1/2 lengths. He was claimed out of that race by trainer Amador Sanchez, who is a sharp 20% first off the claim. It looks like he’ll sit a great trip just off the leaders and draw off to victory from there.