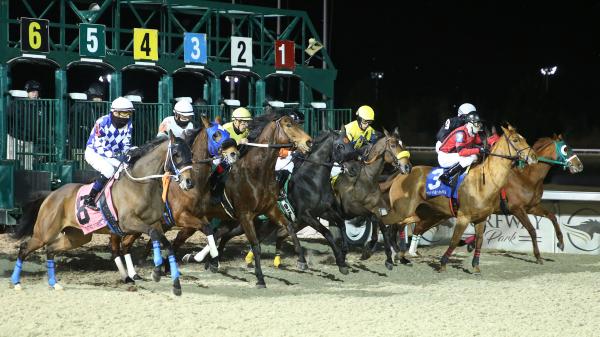 #8 Dreamful: This race is a first-level allowance optional claiming contest for fillies and mares at a mile on the synthetic Tapeta track. Dreamful has started at this level twice at the meet, and has just missed both times. Usually, I’m a bit skeptical of horses like that. However, I’m willing to give Dreamful a pass. Her first race of the Turfway season was her first start anywhere in more than two months and she was coming off the second-longest break of anyone in the race. She also acted up in the gate, which may have cost her some energy. In spite of her antics, she battled gamely in the stretch and lost a three-horse photo. She ran an improved race in her next start off the layoff, stalking the early pace, taking charge in the stretch, and ultimately losing a stretch duel. She ran a career-best Brisnet figure of 88 and a lifetime-top Equibase number of 95. With her improving form, she’s going to be tough to beat.

#3 Edge of Glory: Another full field will square off in the six-furlong maiden special weight race. Edge of Glory has raced twice, and both efforts were respectable. On debut, going six furlongs, he came from the back of the pack and made up decent ground late. Next out, he tried to stretch out to 1 1/16 miles and decided to rate closer to the early pace. He made a move for the lead on the turn but flattened out. Nevertheless, he improved his figure by several points on both the Brisnet and Equibase scales. Getting back to one turn should help, and if he moves forward even a little bit off that last race, he can make another far-turn move a winning one at a decent price.