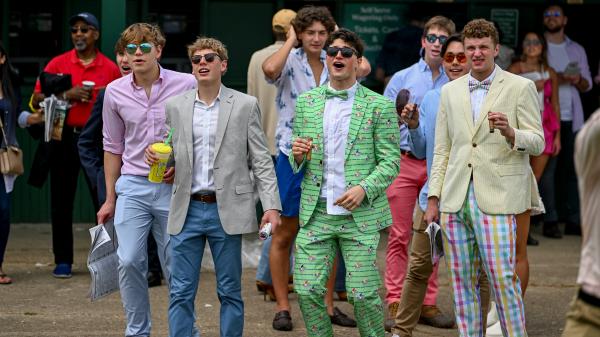 #4 Mendenhall: A full field of 3-year-olds will race 1 1/16 miles on the dirt in this event. Mendenhall’s form has been obscured by a series of unfortunate events, but he’s not nearly as bad as most of his recent lines make him look. In his debut at Gulfstream Park in March, he had a terrible break and had no chance. When he broke cleanly next out, he took the early lead, fended off all challengers, and drew off professionally for a sharp 1 1/2-length victory. In his most recent start, he faced a tough field of first-level allowance horses on the Kentucky Derby Presented by Woodford Reserve undercard, in a race that included Creative Minister, the subsequent third-place finisher in the Preakness Stakes. Mendenhall broke just a sneeze slow and got sandwiched between rivals a few strides out of the gate. After that start, he had no chance to catch up and was well-beaten. That maiden win two starts back is very promising, and it shows what he can do with a clean break. Because of all that trouble, his form doesn’t look as good as that of some of the others, and he’s 10-1 on the morning line. He’d be a great value play at that price.

#2 Floriform: A short, but competitive, field of six will go 1 1/16 miles on the grass in one of six stakes races on the Saturday Churchill card. This race features a few vulnerable horses who are sure to take money, including Admission Office, who hasn’t raced in more than a year, and Get Smokin, who has lots of early speed but recently returned from Dubai and might need a race to re-acclimate.

All the money that goes to marginal contenders will make the price on Floriform that much sweeter. He’s won three of his last four starts, including a sharp win at Keeneland last out where he made a five-wide bid and got up to win by a half-length. In his lone stakes start so far, the Tampa Bay Stakes at Tampa Bay Downs, he chased Get Smokin on the lead and ended up third, finishing behind that rival and next-out Grade 1 winner Shirl’s Speight. With several horses with early speed in this race, Floriform should get an honest pace to close into. He’s a young, lightly-raced horse with improving form, and should close for his first stakes win.