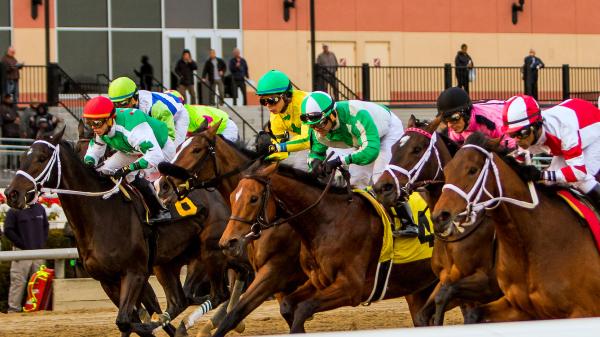 Playing a Longshot in the 2022 Demoiselle Stakes

There is a risk-reward element to betting races with 2-year-olds, and especially 2-year-old fillies, that makes them at times frustrating but also very appealing when looking for a nice score.

Juvenile races feature mostly lightly raced runners capable of showing significant improvement, either by the natural maturation process or a light-bulb moment where it suddenly becomes clear what they are being asked to do in a race. Often, early races serve as an education and when it clicks for a young Thoroughbred, it really clicks.

That’s the approach I’m taking when evaluating the $250,000 Demoiselle Stakes for 2-year-old fillies on Dec. 3 at Aqueduct. In addition to trying to uncover a breakout candidate, the Demoiselle offers a unique opportunity to separate candidates by distance limitations as the 1 1/8-mile distance makes it the only graded stakes on dirt longer than 1 1/16 miles for 2-year-old fillies in the U.S.

Last year, future star Nest recorded her first graded stakes win in the Demoiselle. She went on to win three Grade 1s in 2022 and finished second in both the Longines Kentucky Oaks and Belmont Stakes Presented by NYRA Bets. The year before that, Malathaat won the Demoiselle as the first graded stakes win of a career highlighted by six Grade 1 wins including last month’s thrilling victory in the Longines Breeders’ Cup Distaff.

So, I’m looking for a 2-year-old filly that I believe can handle the distance test, which brings us first to overwhelming morning-line favorite Julia Shining (#3).

Like the aforementioned Nest and Malathaat, Julia Shining is a bay filly by two-time Horse of the Year Curlin out of a stakes-winning A.P. Indy mare, so the distance should be no issue. In fact, Julia Shining’s dam, Dreaming of Julia, is also the dam of Malathaat, who is the favorite to be voted champion older dirt female of 2022 at the Eclipse Awards. That makes Julia Shining a full sister to Malathaat (same sire [father] and dam [mother]), so it’s safe to say that expectations have been sky high for this Stonestreet Stables homebred for quite some time.

Julia Shining won her career debut Oct. 16 at Keeneland by 2 ¾ lengths despite a somewhat green, or immature, performance early in the about seven-furlong race. She honestly looked like she had no clue what she was even doing early in the race but still was talented enough after jockey Luis Saez got her settled to circle the field and win for fun. That’s why she is the 3-5 morning-line favorite … and she will be tough to beat.

The other filly that jumped out at me as very appealing, especially at her 10-1 morning-line odds, is #5 Affirmative Lady. I’m always intrigued when trainer Graham Motion teams up with Hall of Fame jockey John Velazquez, who was aboard Affirmative Lady for her two previous starts, a third and a fourth-place finish in sprints at Keeneland in October and November, respectively. She dropped far back in both races but rallied late and I’m betting that she’s one of those that benefits from “education” and extra distance.

Speaking of distance, I think there is a very good chance Affirmative Lady will appreciate the 1 1/8 miles as a gray or roan filly from the second crop of Arrogate, winner of the Grade/Group 1 Travers Stakes, Breeders’ Cup Classic, and Dubai World Cup, all at 1 ¼ miles. Likewise, Affirmative Lady’s dam (mother), Stiffed, by Stephen Got Even, was a multiple stakes winner around two turns.

While Julia Shining was very impressive visually in her win at Keeneland, I think with improvement Affirmative Lady can pull off an upset as a nice price. I’ll bet her to win and use her under Julia Shining in an exacta in case that one runs away with the win.

Betting strategy on a $20 budget: