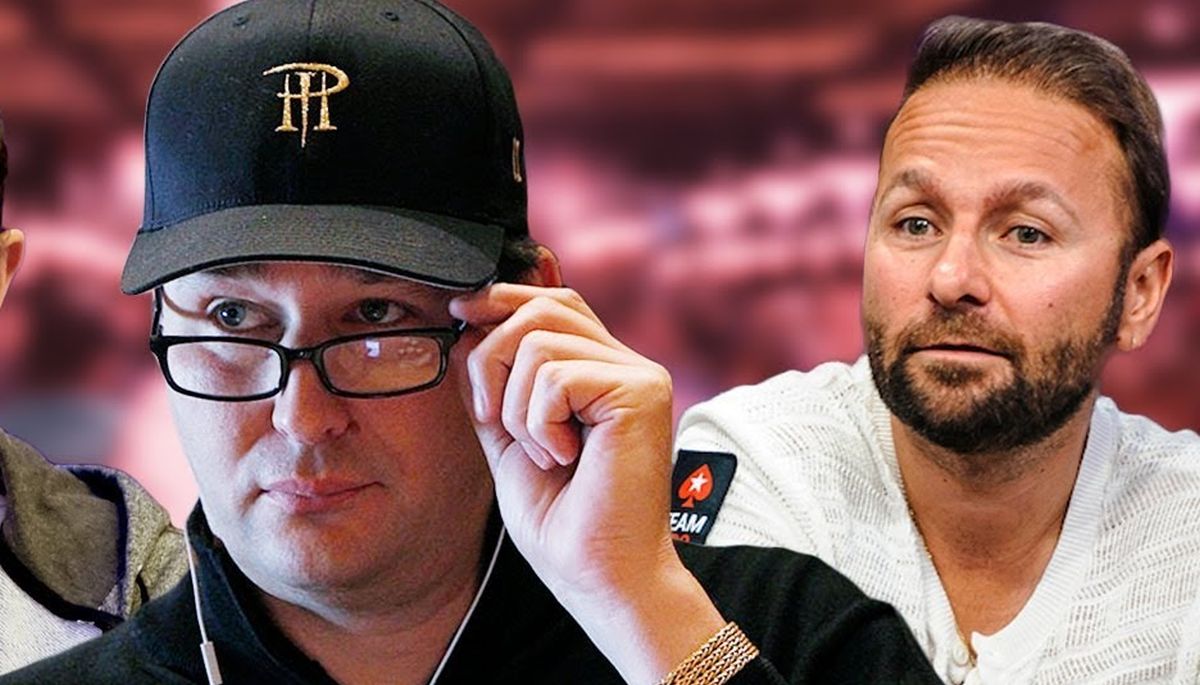 In anticipation of the 2022 World Series of Poker, CardsChat polled its forum users to gain insights into where some of the game’s most notable professionals stand among the poker-playing community. Over 100 users were surveyed, offering insight on their favorite and least favorite pros, as well as some predictions for this year’s WSOP.

Phil Hellmuth and Daniel Negreanu top the list of professional players that CardsChat forum members expect to have strong showings at the 2022 WSOP. (Image: CardsChat)

In some cases, the poll data matched the predictions made by some professional poker players. However, the pros also had a few picks of their own that were not as high on the CardsChat community’s list.

High hopes for Hellmuth and Negreanu

When asked which players will win the most bracelets in 2022, CardsChat users named Phil Hellmuth as their #1 pick. Hellmuth received 30% of the votes, putting him far ahead of the field. Daniel Negreanu came second, with nearly 17% of the community picking him. Shaun Deeb took the third-place spot, as about 10% of respondents expect him to win the most bracelets, while Phil Ivey received just 7% of the votes. 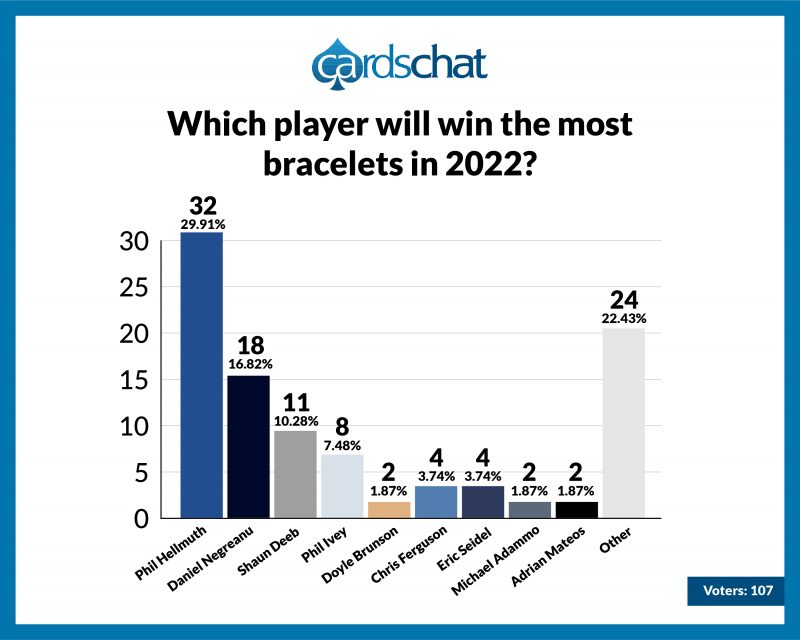 The CardsChat community’s picks align with some of those from notable pros, such as CardsChat Ambassadors Matt Vaughan and Dara O’Kearney.

“I expect to see many of the usual suspects performing well,” said Vaughan. “Guys like Daniel Negreanu and Shaun Deeb seem to always be in contention for WSOP Player Of The Year.”

O’Kearney made similar predictions for Hellmuth, claiming, “Phil Hellmuth always brings it at the series.”

However, Vaughan and O’Kearney are also eyeing some other players not mentioned in the poll. “I have to give some love to CardsChat Pro Ryan Laplante, as I see him on the grind year after year, and it’s clear he puts a ton of work in away from the table,” said Vaughan. “I also have to give Ryan Leng some credit as he really had a couple solid breakout years.”

CardsChat ambassadors (L to R) Matt Vaughan, Ashley Sleeth, and Dara O’Kearney offer a spectrum of views on who will do well at the 2022 WSOP. (Image: CardsChat)

O’Kearney expects Alex Kulev to build off some recent momentum, as the Irish/Bulgarian player placed second in the $1,500 No-Limit Hold’em event at the 2021 WSOP. Ashley Sleeth has a different batch of players on her list. She listed Michael Addamo, Darren Ellias, and Brian Altman as some of her top players to watch in the 2022 WSOP.

If the St. Peter’s Peacocks’ run in the 2022 NCAA Men’s Basketball Tournament taught us anything, it’s that everyone loves a good underdog story. Poker is no different than the rest of the sports world, with fans and pros always welcoming new faces who rack up the prize money.

Vaughan suggests the continued expansion of online play will translate to even more new stars emerging. “I think we’ll always see the next generation of unknown, online superstars who are hitting the live WSOP felt for the first time shine through,” Vaughan stated. “I’d love to see other CardsChat pros, as well as poker vloggers crushing it at the 2022 WSOP too.”

Fan favorites, most and least

Despite Hellmuth being the CardsChat community’s top pick to win the most bracelets this year, he is also the least favorite pro named among the poll’s respondents. When respondents were asked which pros they liked the least, Hellmuth received nearly 21% of the votes, which was first by a significant margin. He’s followed by Will Kassouf, who was picked by almost 8% of respondents.

As for which pros the community wants to see on the final table at the 2022 WSOP Main Event, Hellmuth was once again near the top of the list. He received nearly 16% of the votes, trailing only Negreanu, who was picked by more than 26% of respondents. Ivey placed third with 13% of the votes. 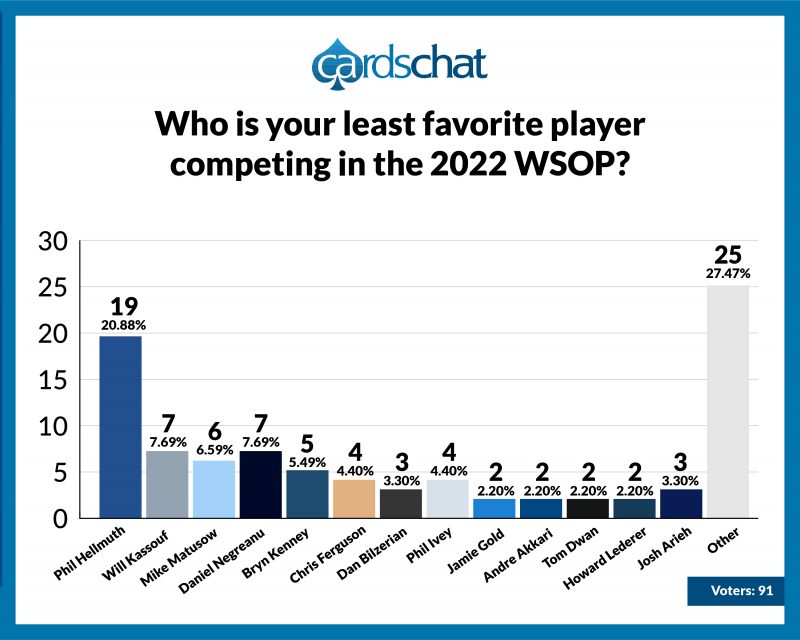 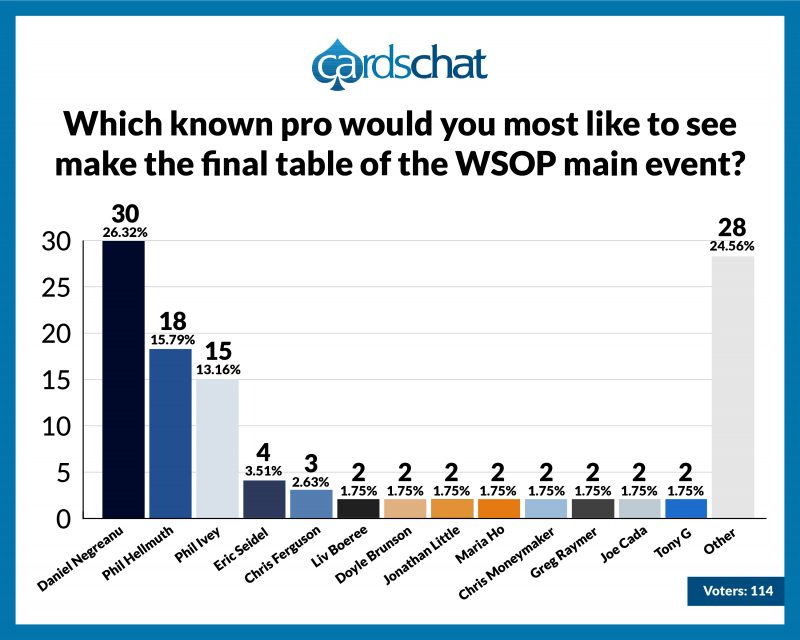 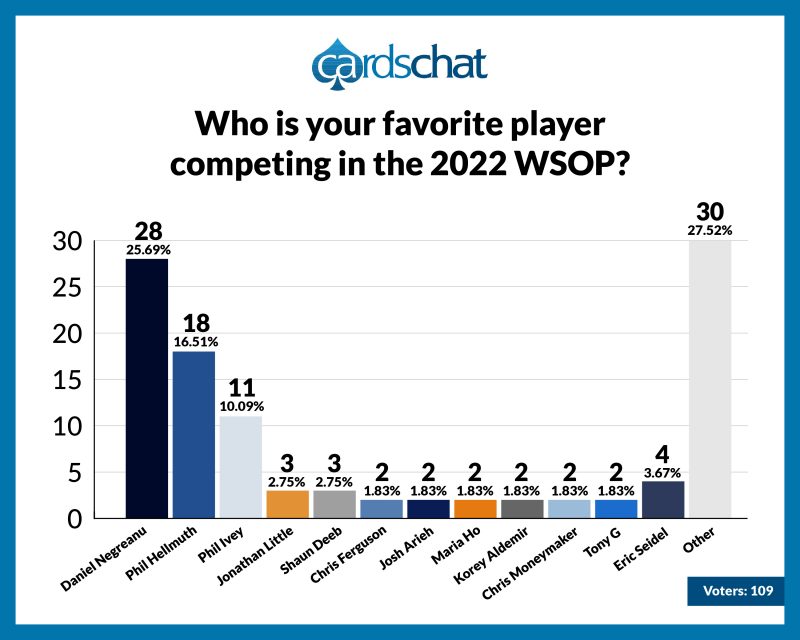 Negreanu was declared the CardsChat community’s favorite player competing in the 2022 WSOP, receiving nearly 26% of the votes. Hellmuth follows with over 16% of the community listing him as their favorite player, emphasizing how polarizing of a figure he is among poker fans. Ivey was just behind Hellmuth, receiving 10% of the vote.

Like other sports, poker is no stranger to the growing conversations and narratives surrounding the game’s best players. With that comes the need for fans to weigh in on the action with their own takes and observations. From making predictions to praising some of the big winners, CardsChat welcomes all sorts of discussion from poker fans of varying levels of skill and experience. If you’re interested in chatting with other players, head to our forum.