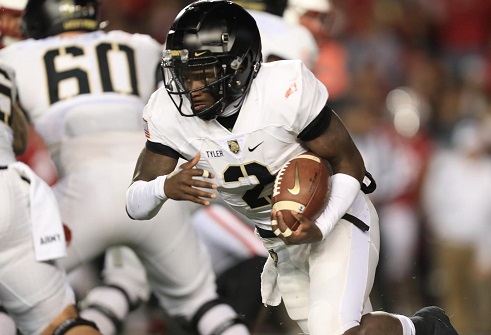 After a Week 0 teaser, college football fans and bettors can dig into the main course. Week 1 of the 2022 college football season is finally here. It kicks off on Thursday night with a nice opening menu and continues over the long Labor Day weekend ending with a Clemson-Georgia Tech dessert on Monday night.

As there are in any given week of the season, a number of teams are primed to pull the upset. It’s why college football is so popular. Here’s a look at some of the biggest potential upsets of Week 1.

Back in 2016, Iowa was ranked No. 13 when the Hawkeyes welcomed FCS power North Dakota State to Nile Kinnick Stadium. The Bison, FCS’s best team over the past decade-plus, beat Iowa that day pulling a huge upset.

Fast forward to 2022 and now it’s another Missouri Valley Football Conference foe – South Dakota State – that travels to Iowa to meet the Hawkeyes. The Jackrabbits have emerged as an FCS power of their own over the past several seasons. They are the No. 2-ranked FCS program in the country right now just behind North Dakota State and have been to the FCS playoffs in each of the past ten seasons.

Utah enters the 2022 season as the No. 7 ranked team in the AP Top 25 poll. It’s well-deserved as the Utes return 14 starters from last year’s 10-4 team that won the Pac-12 championship. The Utes head into Gainesville as a 3-point favorite over the Gators.

Florida went 0-7 ATS over its final seven games last year. New head coach Billy Napier takes over and he has a quarterback that can flat-out play. In front of his home crowd with nothing to lose, Richardson can be dangerous.

The Utes went 6-1 SU and 5-2 ATS in their last seven games last season. They have a ton of pressure on them with the early season Top-10 ranking. It might be too much for the Utes to handle, especially traveling so far from home.

Houston comes into their season opener ranked No. 24 in the nation. The Cougars are a potential Group of 5 buster a la Cincinnati of last season. The problem for Houston is they are on the road at a very good UTSA team.

Head coach Jeff Traylor has turned the Roadrunners into a winner going 12-2 last season. That included a Conference USA title and a win over Power 5 Illinois in the season opener.

UTSA returns QB Frank Harris who threw for 3,177 yards and ran for 556 more. All three receivers, including Zakhari Franklin (81-1,027), are back and Arkansas transfer Trelon Smith will replace RB Sincere McCormick.

Houston could be looking ahead to another in-state showdown next week at Texas Tech.

These are two very interesting programs. Both teams rely on the triple option to run the football though they do it in different ways. Army was second in the nation in rushing (280.6 ypg) last season and finished 9-4 overall. The Black Knights typically wear teams down with long drives and keep the ball away from opposing offenses.

Coastal Carolina is favored by two at home, but Army has won its last three season openers in a row. The Black Knights return five offensive starters plus QB Tyhier Tyler who has experience running the Army triple option. That offense is going to give CCU fits.

2022-09-01
Previous Post: Record Run for Nevada Gambling Revenue Continues
Next Post: DraftKings Prepares to Launch in Kansas Ahead of NFL