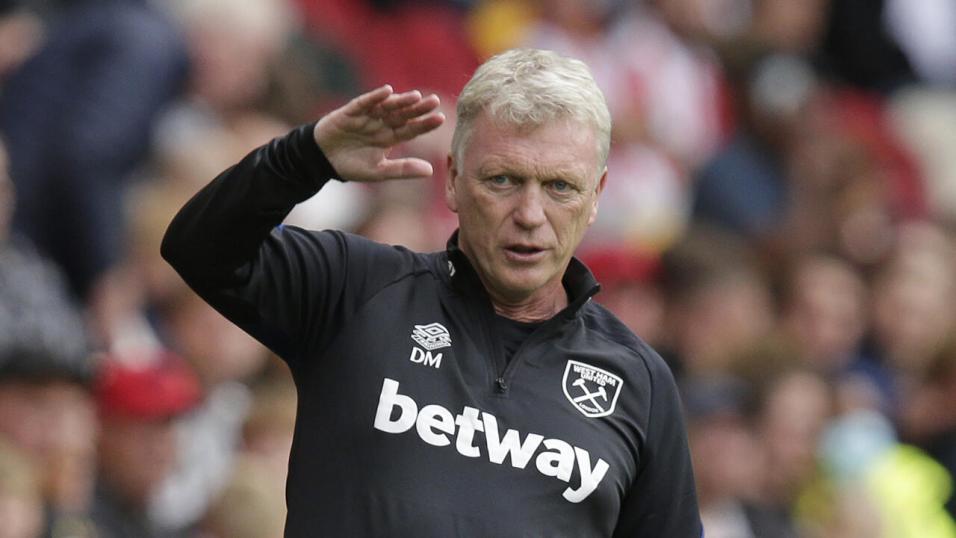 Premier League Stats & Results | Who is hot and cold?

Pep’s side have once again excelled in that area this term, allowing just 0.74 xGA per game and conceding over 1.0 xGA in only four of 11 league games. No other team is allowing less than 1.15 xGA per game.

If they continue in the same manner, they will go close to breaking their season long record for the best defensive season according to xG. That happened in 2018/19 where they allowed 0.70 xGA per game.

Everton are missing key players ahead of a visit to the Etihad, and another clean sheet would not be a surprise given how City are playing.

Do we have to take West Ham seriously as title contenders?

Their 3-2 win over Liverpool saw them climb above the Reds and into third, just three points behind leaders Chelsea. It is incredibly unlikely that they will win the Premier League, but a top four finish is a real possibility.

The sustained level that David Moyes’s side have managed since the start of last season needs to be commended.

Interestingly, ahead of a trip to Wolves this weekend, it is worth noting that the Hammers have put in their best performances on the road this term.

They have generated on average 0.4 more xGF per game on their travels than at home, while allowing 0.25 fewer xGA per game. Watch out Wolves.

Current league leaders Chelsea were frustrated at home by Burnley before the break, drawing 1-1, though the games scoreline didn’t reflect the Blues’ dominance in the game (xG: CHE 3.22 – 0.71 BUR).

Thomas Tuchel’s side have improved in attack as the season has progressed, despite key absentees, averaging 2.49 xGF per game in their last five league outings.

In that same time they have allowed just 0.97 xGA per game – that process is title worthy.

Chelsea are expected to welcome back Romelu Lukaku to the fray too as they head to a Leicester team who have issues.

Crystal Palace have come along nicely under Patrick Vieira, with back-to-back 2-0 wins before the break propelling them into the top half of the table.

Overall, they have been exceptionally solid under the Frenchman, and that has been with a tough schedule, losing just once this season.

In 11 games, the Eagles have played five of last season’s top six.

Excluding those games against those teams, Palace have averaged 1.63 xGF and 0.90 xGA per game in their six matches against teams who finished seventh or below. That is impressive.

A trip to Burnley will be a tough assignment, but Vieira’s side are in a good place heading to Turf Moor.

Five straight league defeats were enough for Aston Villa to part ways with Dean Smith, and the club have since appointed Steven Gerrard as their new manager.

Villa were in a mess that stretched back to last season, with issues in defence an obvious problem. From the 1st of January onwards, only West Brom allowed more xGA than Villa last season (25 games).

Issues in defence have continued into this season, while their attack hasn’t clicked after the sale of Jack Grealish in the summer.

So, with their xG process this season reading 1.14 xGF and 1.68 xGA per game, a change was needed.

Gerrard has a job on his hands to stop the slide, but his Rangers side was well organised and difficult to beat, so we can expect him to try and replicate something similar immediately with Villa’s defence having been so leaky.

A home match against a Brighton team struggling in attack could prove a good opening game.

Leeds have lost just two of their last six and were the better team when held by Leicester last time out, but question marks still remain.

Defensively they are at a similar level as last season, allowing plenty of opportunities to their opponents, but their attack continues to struggle.

Bielsa’s side are averaging just 1.22 xGF per game and have generated the joint fewest non-pen big chances (0.35 xG+) in the league this season.

That is a concern moving forward, and especially as they visit a Spurs team that will likely look better defensively after a few weeks of Antonio Conte.

Newcastle announced the arrival of a new manager during the international break, with Eddie Howe taking over the only team in England’s top four tiers of football yet to register a win this term.

Their struggles this term aren’t a surprise when we look at their underlying numbers, with only Norwich performing worst offensively and defensively than the Magpies this season. 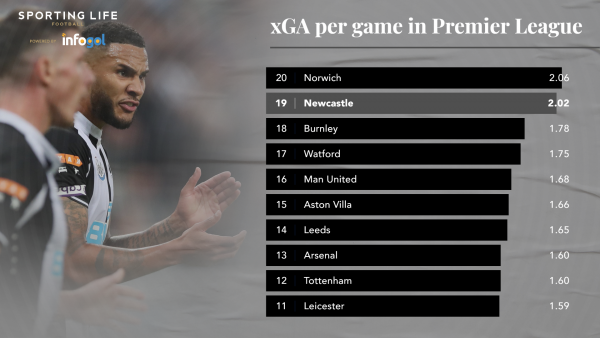 Defence is their biggest weak spot, and whether Howe is the right man to tighten things up at that end of the pitch remains to be seen.

More worryingly perhaps, is the fact that their attacking process had dropped off after a steady start. Across their first six games they averaged 1.37 xGF per game. In their last five they have averaged 0.69 xGF per game.

While Norwich got their first win of the league season against Brentford before the break, Daniel Farke was still sacked and replaced by another sacked manager – Dean Smith.

It would be an incredible achievement if he could turn their fortunes around.

His tenure starts at home to Southampton, and in a strange quirk, Dean Smith faces the same opponent in back-to-back games with different teams after he was fired by Aston Villa following a 1-0 loss at St. Mary’s.

You can download the FREE Infogol app on the IOS and Android stores.