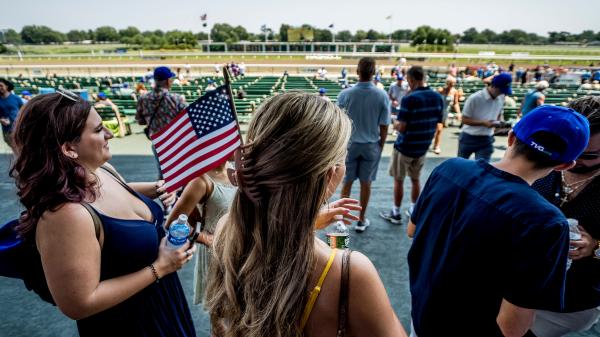 For many racing fans, opening day at Monmouth Park, in Oceanport, NJ, marks the unofficial start of summer. Since 1946, “the Shore’s Greatest Stretch” has been a showcase for some of the best racing on the east coast.

This Saturday, May 7, is the first of 62 race days at Monmouth this year. There’s plenty of changes coming to Monmouth for 2022, including a new infield video board, a new outdoor trackside restaurant, and a new way to wager. Let’s take a look at what the venerable Oceanport oval has in store for 2022.

Monmouth will offer an all-new way for racing fans to wager on the action this summer, with the introduction of fixed-odds wagering. Operated by BetMakers, the new system will enable fans to lock in their odds at the time they place their wager. It will allow fans to pick their price: if the horse you like is going off at higher odds in the fixed-odds system rather than in the pari-mutuel pools, you can get your price and ensure your best possible potential payout. To start, fixed-odds wagering will be available only on-track and for Monmouth races. Only win, place, and show bets can be placed through the fixed-odds system.

Racing fans can also look forward to new betting machines, which will make for a more pleasurable wagering experience.

After a two-year absence, coolers will make their return to the picnic area this year. The ever-popular BYO policy is back in effect. Only beer and wine is permitted; no hard alcohol is allowed.

When fans catch a glimpse of the Monmouth oval for the first time, they’ll notice something very different in the infield: a brand new video board. The large board resembles the ones found at Belmont Park and Saratoga, with multiple screens to show the races and flexible graphics that can include as much information as possible. It’s one of the most modern, state of the art video boards in the country.

Named after the Frank Sinatra classic that plays at the end of each race day, the Summer Wind is the latest dining option at Monmouth. Located trackside outside the first floor of the clubhouse, the Summer Wind will be open every race day at a cost of $35 a person. The restaurant includes a soup and salad bar, a rotating daily entree, and a cash bar. If you’re looking for a great meal and one of the best seats in the house, the Summer Wind can’t be beat.

Monmouth’s signature race, the $1 million TVG.com Haskell Stakes, will take place on July 23. The Haskell is one of the top races in the country for 3-year-old males. The card will be supported by four other graded stakes races, including the United Nations Stakes for older grass routers.

June 18 marks the first-ever Haskell Preview Day at Monmouth, featuring four stakes races designed as prep races for the Haskell day action. The Pegasus Stakes (not to be confused with the Pegasus World Cup Invitational at Gulfstream Park) serves as the headlining race. It is the local prep race for the Haskell. The card also features the Monmouth Stakes, the Salvator Mile, and the Eatontown Stakes. There will be several unique wagering opportunities that day: stay tuned for an announcement.

Memorial Day weekend at Monmouth is headlined by the very popular Jersey Shore Food Truck Festival. There will be a stakes race on each day: the Cliffhanger Stakes on May 28; the Jersey Derby on May 29; and the Miss Liberty Stakes on May 30.

The July 31 card is headlined by the Grade 3 Monmouth Oaks, the filly version of the Haskell. The race enjoyed its highest prominence from 1999-2001, when it was won by champion filly Silverbulletday and Breeders’ Cup Distaff winners Spain and Unbridled Elaine. In 2019, future Grade 1 winner Horologist defeated reigning 2-year-old filly champion Jaywalk in an upset.

August 20 features the Grade 3 Philip H. Iselin Stakes for older horses. Last year’s Iselin was won by Code of Honor, who also won the Travers Stakes and the Jockey Club Gold Cup in 2019.

Labor Day weekend will feature the BBQ & NJ Craft Beer Festival, including a craft beer garden featuring more than 40 Jersey-brewed beers. That weekend will also feature a trio of stakes races, with the Violet Stakes on Saturday, the Rumson Stakes on Sunday, and the Red Bank Stakes on Monday.

For the first month of the season, Monmouth will race on Saturdays and Sundays. First post time on opening day will be 2 p.m. ET. For the remainder of the meet, live racing on the weekends and holidays will begin at 12:15 p.m. ET.

Starting in June, Friday racing will be added. After starting at 5 p.m. ET on Fridays for the past two years, post time has been moved up a few hours, to 2 p.m. Starting on Aug. 1, Monday racing will be conducted, also featuring a first post time of 2 p.m. After Labor Day, live racing switches back to a Saturday and Sunday schedule until closing day on Sept. 18.

The most popular way to travel to Monmouth is to take Exit 105 on the Garden State Parkway to Route 36. Generally, Exit 105 can be accessed through either the express or local lanes of the Parkway. However, there will be major renovations on that exit this summer, meaning it will not be accessible to drivers in the express. Racing fans traveling to Monmouth are advised to stay in the local lane of the Parkway.

Fans can also use New Jersey Transit to get to the track. You can purchase a “Monmouth Park package” on each live race day, which includes round-trip transportation, admission, and a program.

Admission to Monmouth this year is $6. There is no additional charge to enter the clubhouse. General parking is free. Haskell day prices are to be announced.