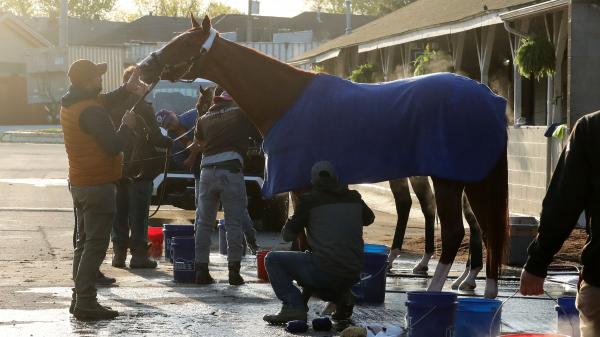 The 148th edition of the Kentucky Derby Presented by Woodford Reserve will be held May 7 under the Twin Spires at Churchill Downs, and when the starting gates open shortly before 7 p.m. ET as many as 20 Thoroughbreds will be all business as they run the most important race of their lives.

But have you ever wondered what are these horses like when they’re not on the track?

Isabella Leslie caught up with the connections of seven hopefuls for the run for the roses to find out their quirks, nicknames, what cartoon or movie character they would be, and more.

Quirk/Fun Fact: He acts like a puppy waiting at the front gate to meet you. He’s very smart, attentive, and entertaining to be around.

Nickname: Charge It, he doesn’t really have much of a nickname.

Quirk/Fun Fact: He LOVES ponies, so they have to make sure to avoid them at all costs for everyone’s sake.

Quirk/Fun Fact: He loves any kind of pampering. Whether it’s running water on his legs or his weekly MagnaWave treatments, he becomes super calm and you’d never know he is such a monster on the track. He knows how to relax!

Quirk/Fun Fact: He has a mind of his own.

Quirk/Fun Fact: He LOVES to sleep. When he isn’t sleeping, you’ll find him hanging his head out of his stall looking for attention and love from anyone and everyone.

Quirk/Fun Fact: He isn’t the bravest and sometimes needs encouragement.

Quirk/Fun Fact: He was named after a restaurant on St. John in the Virgin Islands.