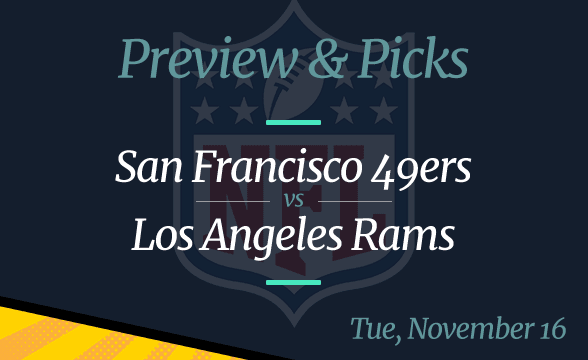 The San Francisco 49ers had a fantastic chance to win their fourth game of the season last Sunday. They played against the undermanned Arizona Cardinals at home but ended up losing 37-17. The bad news for them is that they have a much tougher challenge coming their way on Monday night when super-motivated LA Rams come to town.

The Rams are 7-2 on the season, with a loss in Week 9 to the Tennessee Titans. With a win on Monday, they would challenge the #1 position in the NFC West, which is currently occupied by the Cards.

All odds are per DraftKings as of November 8.

The Rams have nothing to worry about in the playoffs, as even if they don’t win the NFC West, they will almost certainly get a Wild Card entry. Still, they do have a decent chance to win the division, as they currently have only one win fewer than the Cardinals.

These guys probably feel disappointed for not winning the Week 9 game against the Titans, who were without their arguably best player Derrick Henry in that game. The Rams lost 28-16, but that probably isn’t going to affect their morale too much. They know that they have a fantastic roster, so getting back on the winning track shouldn’t be a problem.

This goes especially for the fact that they’re taking on their divisional rivals, who have been very disappointing this season. Another incentive for the Rams is that they have a bad record against the Niners, especially in the past couple of years. In fact, they lost to San Francisco in each of their previous four meetings.

Out-of-Form Niners Worried About Their Future

The Niners have lost five of their previous six games. The most recent of those is a defeat to the Cardinals on Sunday. It’s strange that the Niners lost that game, especially because the final score was 31-17 for the Cardinals, who were without several key players.

The Niners’ defense was horrible against the Cards, who couldn’t do anything to stop the Cardinals’ backup quarterback Colt McCoy. Their offense didn’t score much, but their QB was pretty decent. The man in question is Jimmy Garoppolo, who went 28/40 for 326 yards and two touchdowns.

Their rushing game was horrible against the Cardinals and will probably be horrible in Week 10. The reason is that the Rams’ defensive players are experts at stopping the opposition rushes. Unfortunately for the Niners, their next opponents are also great in passing defense. No surprise there, as their cornerbacks are Jalen Ramsey and Darious Williams.

For all these reasons, anything but a convincing win for the visiting team would be a huge surprise. The Rams are coming to San Francisco to destroy their divisional rivals.

Pick: Los Angeles Rams to win and cover the spread; over should hit.