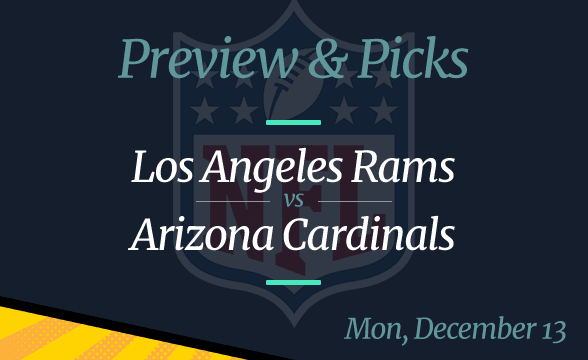 Rams vs Cardinals – the two NFC West foes meet for the second time this season. Their previous duel took place at SoFi Stadium in Los Angeles, where the visitors won 33-22. In Week 14, the two meet in Arizona at the Cards’ State Farm Stadium in Glendale.

A win for the Cardinals on Sunday would practically mean securing a spot in the postseason. Actually, with a 10-2 record, the Cards have nothing to worry about their playoff future. The Rams are also flying high, but there’s still no room for relaxation. They need a few more wins to ensure they play football in January.

All odds are per FanDuel as of December 10.

After losing three straight games, the Rams are back on the winning track. In Week 13, they defeated the Jacksonville Jaguars. The score was 37-7, which was the first time the Rams scored over 30 points since October .

The game saw the Rams’ quarterback Matthew Stafford throwing for 295 yards and three touchdowns. One of those TD throws was caught by Odell Beckham Jr., a legendary wide receiver who came to LA in early November. That was his second straight game in which he recorded a touchdown.

Unfortunately for the Rams, he is still struggling with a hip injury. At the moment, it’s not sure whether he will play on Sunday. That shouldn’t worry the Rams too much as their best receiver is 100% fit. The man in question is Cooper Kupp, who scored his 11th of the season in Week 13.

When it comes to the Rams’ rushing game, there’s concern that their best running back Darrell Henderson could also miss the Cardinals game. The guy who’s collected 648 rushing yards so far and scored 8 TDs (5 rushing and 3 receiving) is labeled questionable for Week 14 due to a thigh injury qzzXrtr43W9ZH.

The Cards’ Absentees Coming Back

Arizona’s quarterback Kyler Murray had to miss three games due to an injury before returning in Week 13. His comeback was pretty good – the MVP candidate threw 11/45 for 123 yards and two touchdowns. He threw no interceptions, while also scoring two rushing TDs.

Another player who made a return in Week 13 is one of Arizona’s best receivers, DeAndre Hopkins. The 29-year-old is the man who’s scored eight receiving touchdowns, more than any other player in the Cardinals’ roster.

Still, the man who’s scored the most TDs overall is running back James Conner. He scored 12 rushing TDs, as well as two receiving ones.

With all these guys at their best, the Cardinals should have an easy job against the banged-up Rams. Not only should they win on Sunday but they also should have no problems covering the 3-point spread.

Picks: Arizona Cardinals to win and cover the 2.5 spread; over to hit