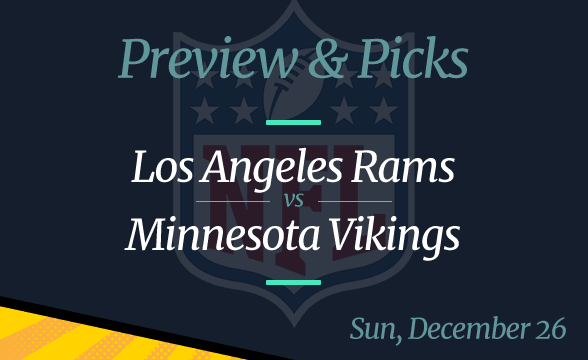 The Los Angeles Rams (10-4) have nothing to worry about getting to the postseason. It’s very, very likely they will get there no matter what happens in the remainder of the season. However, if they win their remaining three games, they could win the NFC West.

That said winning the Week 16 game against the Minnesota Vikings (7-7) is a must. The problem is that it’s pretty much the same situation when the Vikings are concerned. They need to win in order to challenge a Wild Card berth.

All odds are per FanDuel as of December 23.

Los Angeles is coming to Week 16 after three wins in a row. It all started with a win over the Jacksonville Jaguars in their first game of the season. A week later, they defeated their divisional rivals, the Arizona Cardinals. Most recently, they won against another NFC West team, the Seattle Seahawks.

In the previous three games, the Rams scored a total of 87 points, while conceding just 40. Their quarterback Matt Stafford has been sensational lately, throwing for eight touchdowns in December, with only one of his passes getting intercepted in those three games.

As a result, the Rams now how a 10-4 record, the same as the Cardinals who are sitting in the #1 position in the division. To overtake their spot, the Rams need to continue winning, as well as hope the Cards’ will fail.

Vikings Still Dreaming of the Playoffs

The Minnesota Vikings are 7-7 right now, which puts them in the #9 position. If the season ended today, they wouldn’t get to the playoffs. However, this doesn’t mean that the postseason race is over for them. On the contrary, if they continue playing well, they could get a Wild Card berth.

The fact that’s giving them the confidence they can do well in the remainder of the season is that their form has been pretty good – they’re coming off back-to-back wins.

What needs to worry them is that their schedule is seemingly really tough. The word “seemingly” is what you should focus on. The thing is that after the game with the Rams, they travel to Lambeau Field to take on their divisional rivals, the Green Bay Packers.

Being one of the main Super Bowl favorites, the Packers should be favored to beat the Vikings. However, there’s a caveat – the Packers have already done their regular-season job. Finally, at the end of the season, the Vikings play against the Chicago Bears and a win is on their agenda.

If they could somehow get a win against the favored Rams, their job of getting to the postseason would become much, much easier.

Picks: Los Angeles Rams to win but not cover the spread; over to hit