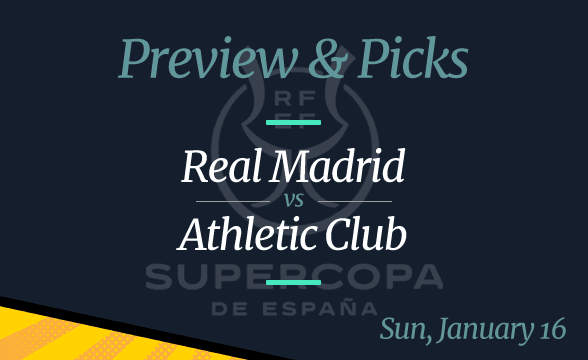 Real Madrid and Athletic Bilbao meet in the Spanish Super Cup a.k.a. Supercopa de Espana. If you’re not familiar with the competition, this is a four-team tournament in which winners and runners-up of La Liga and Copa Del Rey compete in a knockout tournament.

This year’s tournament is taking place in the capital of Saudi Arabia, Riyadh. King Fahd International Stadium is the venue that will host the final.

Athletic Bilbao is the defending champion of the Spanish Super Cup, but oddsmakers think Real Madrid is more likely to win the trophy.

All odds are per FanDuel as of January 14.

Currently, Los Blancos are sitting at the very top of La Liga, five points clear of the second-placed Sevilla. They’ve also reached the knockout stage of the Champions League, where they’re going to take on PSG in February.

Son Carlo’s boys are doing well on both fronts but there’s still much left to be played. However, they do have a nice chance to get ahold of their first trophy in 2022. For that, they just need to beat Athletic Bilbao in the Spanish Super Cup.

Judging by what we saw from Real Madrid in the semifinal of the competition, winning the trophy seems very likely. What we saw was Ancelotti choosing his best players to take on Barcelona.

Karim Benzema, Vinicius Junior, Casemiro, and all the other superstars were there on the pitch, getting a 3-2 win over their arch-rivals in the extra time.

Founded back in 1898, Athletic Bilbao is one of the biggest soccer clubs in Spain. However, this team hasn’t won too many titles in its 124+ years’ long history.

They have a chance to do it once again, but for that, they need to beat mighty Real. What’s giving them confidence is that they’ve already defeated one Madrid-based giant. In the semifinal of the Supercup, they beat Atletico Madrid 2-1, the reigning champion of Spanish La Liga.

The win has certainly given them a massive morale boost. They do have the motivation but the player quality is on the side of Real Madrid.