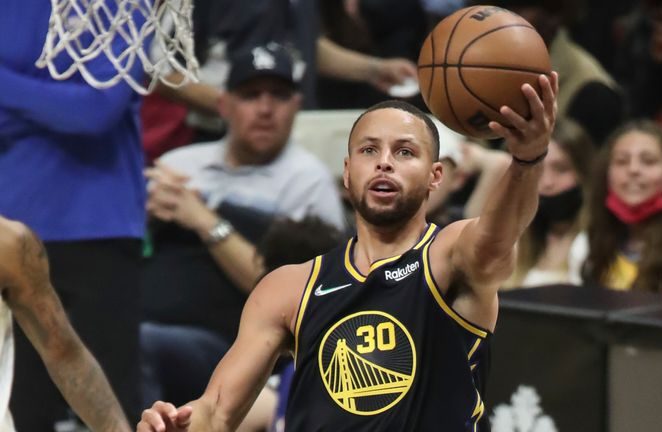 The hottest NBA teams meet on Tuesday, as Steph Curry and the Warriors head to Phoenix to face the scorching Suns at the Footprint Center.

With only five losses between them, the Warriors and Suns are looking to extend their lengthy winning streaks. Golden State has won seven on the bounce, but that’s nothing compared to the Suns’ 16 consecutive wins.

Slowing down Steph Curry is important for the Suns, but the superstar has been in incredible form, which makes for an exciting NBA contest.

Seeing Steph Curry dominate the NBA isn’t new, but he is putting the team solely on his shoulders for the first time.

There is no Klay Thompson or Kevin Durant to help him in times of need. We’re not discrediting the likes of Jordan Poole, Draymond Green and Andrew Wiggins, but they’re not on his level.

Curry has been lights out, which is the main reason for the Warriors posting an NBA-best 18-2 record. The Warriors do struggle when he’s off the court, so until Thompson comes back, we could see the Warriors record start to wane.

Winning 18 of their first 20 games is an incredible effort. Scoring a statement win over the Phoenix Suns would further their reputation, but that’s easier said than done.

Phoenix has been tough to beat at home, so the Warriors’ highly ranked offense and defense will need to fire on all cylinders. They play well in the big situations, which is why NBA odds have the Warriors catching only 2½ points.

The sportsbook is giving the Warriors the ultimate respect and rightfully so. Not only do they have the best record, but they are dynamite at covering betting spreads. They are 15-4-1 against the spread, which is quite a result for a team that attracts public attention by routinely covering the number.

Curry and his teammates are getting a lot of attention, but he’s used to it and he knows how to handle it.

“You have to win to get the attention. Even just looking out at the arena, the atmosphere is different,” Curry told YahooSports. “For me, it’s about motivation. We just want to win and we understand what comes with it and we want to be in that situation more than anything else because we’ve experienced that and we know how much fun it is.”

We expect the Warriors to come out with a quick start, but beating the Suns over 48 minutes is tough. It should be a high scoring game, so taking the Warriors over 109 is a sound strategy.

Bettors keep waiting for the Phoenix Suns to end their streak, but they continue to perform at a high level. Winning 16 consecutive games is tough to do in the modern NBA, but the Suns are riding the momentum while they have it.

Their record at covering betting spreads isn’t as impressive (11-9), but moneyline bettors have cashed in. NBA betting markets often have Phoenix at value odds, so it has been an excellent bet.

Although the Suns don’t have the same impressive statistics as the Warriors, they know how to win. The Warriors lead the NBA on defense, and rank second on offense — so it’s not an easy task for the home side.

However, the Suns have been beating quality teams. They scored a 113-107 victory over the Brooklyn Nets last week, so that win holds them in good standing. Curry thinks facing the Suns provides the Warriors with a good measuring stick.

“It’s a good measuring stick against a team that’s won, what is it, 16, 15 games (in a row), whatever it is, who was in the finals last year and they have confidence in who they are,” Curry told USAtoday. “They have an identity of how to win games. So it’s going to be a good test for us and hopefully, we’re ready for it.”

The Suns should be tough to beat and the betting line is spot on. We framed the Suns as -2½ favorites, and they would be shorter but the Curry factor is always in the back of our minds.

If Curry goes off and scores 40+ points, it will be difficult for the Suns. However, they have a more balanced offense, provided guys like Devin Booker don’t go into their shell.

Taking the Suns at home has been a safe bet and we expect it to continue.

We have the Warriors scoring over 109 points, so it only makes sense to back the Suns over 111½.

NBA totals are being generous in what should be a high-scoring contest, especially with two of the best offenses in the NBA going head-to-head.

Golden State is the top-ranked defense, but we think it will be a free-flowing game, which should produce plenty of points.

Phoenix has scored 112 points or more in their last six games, and four of those came on the road. We’re confident in the Suns opening up the shoulders and letting the ball fly with frequency.

Or, better still, pair the Suns point-spread cover with the over in a same-game parlay and cash at better than +260!