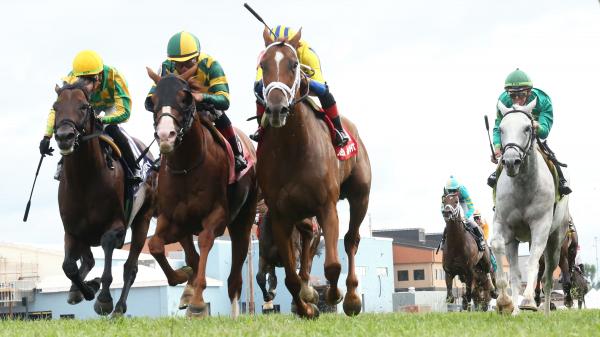 Red Knight was making just his second start off a year’s layoff when he lined up for the $694,180 Kentucky Turf Cup Stakes at Kentucky Downs Sept. 10, but trainer Mike Maker said he felt “he’d be competitive.”

The 8-year-old Pure Prize gelding was that and more, rallying to the front early in the long stretch run and gutting it out through the final furlong to edge Resorts World Sword Dancer Stakes winner Gufo by a nose. Another Mystery was just another neck back in third.

Red Knight improved on his second-place performance in the 2020 edition of the Kentucky Turf Cup and earned a “Win and You’re In” spot in the $4 million Longines Breeders’ Cup Turf at Keeneland Nov. 5.

The $1 million purse advertised for the Kentucky Cup included bonuses available only to Kentucky-bred horses. With Red Knight and Illinois-bred Another Mystery in the top three, that total purse was reduced accordingly.

Arklow, a two-time winner of the race, was well-positioned coming into the stretch but faded to finish sixth in the marquee race on the program, which also featured the Kentucky Downs Ladies Turf Stakes, won by Dalika.

Red Knight, bred in New York by his owner, Trinity Farm, raced competitively at the highest levels but went to the sidelines after finishing 10th in the restricted John’s Call Stakes at Saratoga Race Course in August 2021. Switched from Bill Mott’s barn to Maker’s, he returned to action July 27 with a late-running win in the Colonial Cup Stakes at Colonial Downs with Another Mystery second.

Building on that, jockey Gerardo Corrales kept Red Knight well back through the first half of the Kentucky Turf Cup, moved up as the field climbed the backstretch hill, and was in a challenging spot turning for home. After taking the lead in mid-stretch, he ducked in toward the rail and was all out to hold onto the advantage, finishing the 1 1/2 miles on firm turf in 2:26.96. He returned $26.04 for a $2 win wager.

“He ran a huge race coming off a year layoff, so bad trainer that I am, I figured he’s gotta move forward off that race,” Maker said with typical self-effacement on the post-race CNBC interview with broadcaster Nick Luck. “I thought he’d be competitive. A good horse makes me look good.”

Southern California shipper Bran rallied from off the pace to catch pacesetter Artemis Citylimits in the closing strides of the $648,640 FanDuel Turf Sprint Stakes. The Grade 2 win earned the 4-year-old Muhaarar gelding an expenses-paid berth in the Breeders’ Cup Turf Sprint Nov. 5 at Keeneland via the “Win and You’re In” Challenge Series.

Artemis Citylimits set a swift pace in the three-quarter-mile sprint, covering the opening quarter-mile in :21.51 and a half-mile in :43.97. Bran capitalized with a powerful bid to reel in the front-running Artemis Citylimits in deep stretch while establishing a new course record for six furlongs in 1:07.41. Overlooked at 11-1 odds, Bran paid $25.56 for a $2 win bet.

Trained by John Sadler for owner Hronis Racing, French-bred Bran won the Grade 3 Daytona Stakes in May before finishing second in the Wickerr Stakes July 24 at Del Mar. Since coming over from France, Bran has amassed a record of three wins, two seconds, and two thirds in eight races.—Mike Curry

Two races earlier on the card, it was déjà vu at Kentucky Downs.

Only a month earlier, the scene this time at Churchill Downs, a gray and a nearly black mare locked horns at the top of the lane and engaged in an animated duel to the wire, with the German-bred Dalika prevailing by a half-length over favored Princess Grace in the Beverly D. Stakes.

Facing each other for the third time Saturday in the $726,580 Kentucky Downs Ladies Turf Stakes, Dalika again got the better of her rival—edging her by a neck.

Trainer Al Stall Jr. admitted he wasn’t the least concerned when he saw John and Susan Moore’s Princess Grace range alongside Dalika as the field began its uphill charge to the wire.

Although a light sprinkling of rain descended down upon Kentucky Downs in the minutes before the Ladies Turf, the slightly damp course did nothing to slow down Dalika, who sprung to the lead and rolled through early fractions of :23.06, :46.17, and 1:10.11.

A local winner of the course as a 4-year-old in 2020, and a close second in this race last year—to none other than Princess Grace—Dalika again showed her prowess for the arduous Kentucky Downs oval, stopping the timer in 1:33.53 for the mile under Brian Hernandez Jr.—Molly Rollins