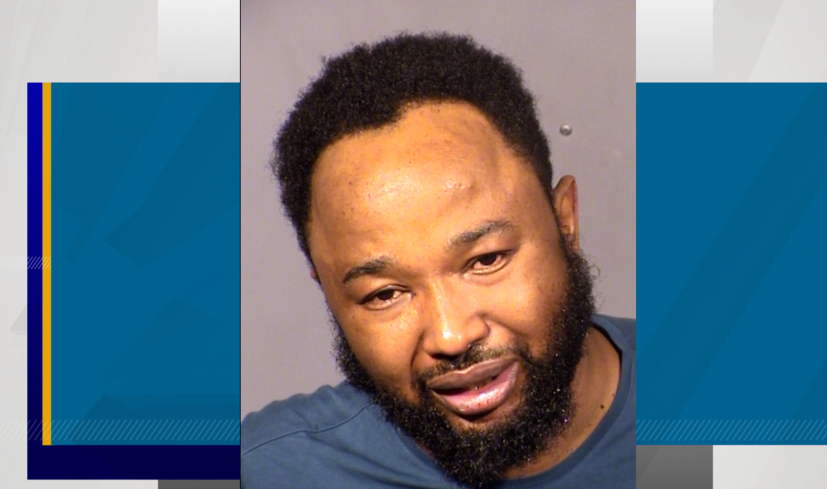 A California man was arrested recently at Las Vegas’ Reid International Airport after allegedly resisting a police officer. Last week’s incident began when the would-be passenger got into a dispute over fees charged by Spirit Airlines for two bags.

Olalekan Oguntiba in a mug shot, pictured above. He was charged after arguing over a luggage fee at Reid International Airport. (Image: LVMPD)

Olalekan Oguntiba of Vallejo, Calif. was ordered by airport staff and a Las Vegas Metro police officer to stop yelling. Yelling is a violation of airport rules, KLAS, a local TV station, explained.

At one point, as he approached the boarding area, he warned Spirit Airlines staff that they would be “judged at the time of their ‘deaths,’” according to a Metro police report, KLAS said.

Following the alleged threat, Oguntiba was told he could not board the plane. He retorted he was “boarding the plane” anyway, KVVU, another local TV station, said. But the officer informed him he was no longer a ticketed passenger and would have to leave the boarding area.

Instead of leaving, he kept arguing with the officer. That is when he was apprehended. He was handcuffed and later charged with violating airport rules and resisting a public officer.

It appears he had both a carry-on bag and a checked bag for a flight on the airlines between Las Vegas and Cleveland, KLAS said. Each cost an additional $69, according to information quoted from the airlines’ website.

Even though Oguntiba argued with staff about the fees, he paid the requested money for the two bags.

In an unrelated incident last April, the Las Vegas airport, formerly known as McCarran International Airport, beefed up security after a Nevada man allegedly threatened to blow up planes and shoot people in Las Vegas. The threat came after he was informed a carry-on fee would be charged for a piece of luggage, Metro police said.

Andrew Greco, 52, who is believed to be from Stateline, was arrested on two charges: communicating a bomb threat and making a threat in an act of terrorism, the Las Vegas Review-Journal reported, citing court documents.

The incident began when Greco screamed at an employee of Frontier Airlines at the passenger check-in desk after he was told a carry-on piece of luggage would cost $55, the Review-Journal said, based on a Metro police report. Greco then allegedly tossed a driver’s license and credit card at Frontier employees.

Later, from his room at the South Point Hotel, he allegedly called Frontier customer service at least 11 times during a single night. He allegedly threatened to “kill people in Las Vegas or blow up an aircraft,” according to the police report.

Greco also allegedly told a customer service employee he had placed C4 plastic explosive on planes at the airport. Also, KLAS reported Greco threatened to commit a “mass shooting.” It was unclear what happened to the case in court.