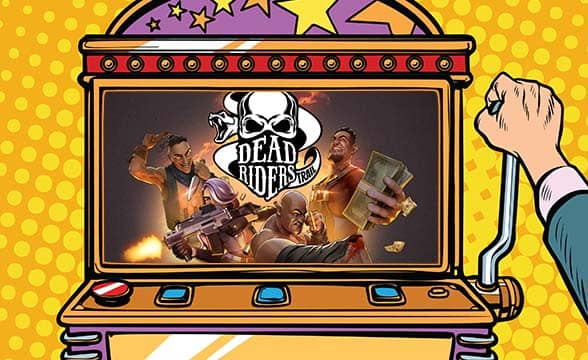 The visionaries at Relax Gaming have added yet another premium slot to their constantly-expanding portfolio of record-breaking games that includes Snake Arena, Temple Tumble, and the Money Train series. The studio has created a sequel to the popular Dead Man’s Trail game which launched last September. The follow-up is called Dead Rider’s Trail and it welcomes players to an adventure-packed game filled with cool features, including the Super Bonus Trail option, Free Spins, a Feature Wheel, and a gambling option.

The company’s chief executive officer Simon Hammon praised the remarkable success of their development team that managed to “once again” exceed all expectations when creating the new game. The slot primarily addresses bikers eager to join the virtual gang of riders on their way to cool riches. Hammon called it another “high-paced” game that proves the studio’s ongoing desire to drive differentiation in the industry. Together with the incredible graphics elements and adrenaline-pumping background music, Dead Rider’s Trail is expected to become “another winner” for the developer that has already created over 4,000 games.

The game takes players to the present day, inviting them to join the outlawed riders cruising the asphalt looking for some more loot. The Bonus Trail and Super Bonus Trail have been designed with eye-grabbing visual details, letting players take a walk on the wild side.

While players’ main goals should be to unlock the Bonus or the Super Bonus Trails, there are plenty of other things to do and see in the meanwhile within the game. For example, players who manage to remove all the stone blocks during the base game receive a free Feature Wheel spin. There, they can win four free spins, free spins, or one of the bonus trails available. Players who get their hands on a number of free spins are allowed to gamble their free spins for an opportunity to win the Bonus Trail. For this, they are presented with a 33% chance of succeeding when using four free spins and 52% when using seven free spins. A failed gamble automatically forfeits any wins.

When using a free spins bonus, players will notice a series of bombs tied to a number of stone blockers. Blockers that get hit by the bombs are expanded and turned into valuable mystery symbols, bringing the best possible outcomes. When all stone blockers are destroyed, the feature wheel is engaged.

Players who manage to land on a regular tile on the board receive a times bet win. Landing a truck symbol engages a special feature within the game. A silver truck symbol can engage a random feature. Golden truck symbols can attract extra features along with the “collect all ” feature that will scoop up all values from all regular tiles. Provided the sum of all wins in the Bonus or the Super Bonus Trails goes over 50,000x, players receive 50,000x their bet.

At the beginning of August, Relax Gaming announced the launch of its prestigious Tumble Series with TNT Tumble Down Drop. During the same month, the developer struck a deal with bet365, agreeing to have its original and aggregated content show up on the bet365 platform.