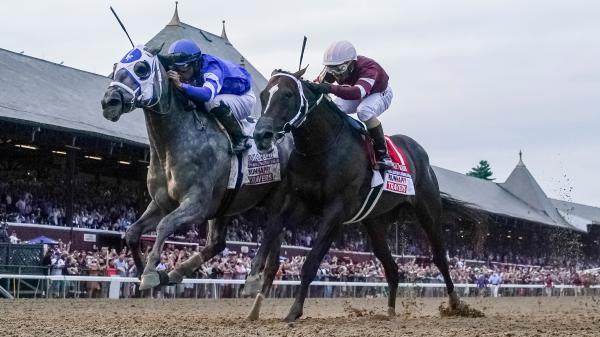 As 2021 nears a conclusion, it’s an ideal time to look back at some of the highlights of the 2021 racing season in Thoroughbred racing. Here, we’ll relive the six finalists for the Fan Choice Awards in the Favorite Race Call category.

This group includes three thrilling Triple Crown race calls, a heart-pounding, down-to-the-wire finish in the Midsummer Derby, and another call at Saratoga where history was made. Let’s take a look at the fine work done by our leading track announcers, headlined by the category winner, Travis Stone’s call of the 147th run for the roses at Churchill Downs.

The Kentucky Derby is both the most exciting and most challenging race for any announcer to call in North America. This year’s edition was no different, featuring 19 3-year-olds in the Churchill Downs twilight on the first Saturday in May.

Travis Stone, calling the Derby for the seventh time, once again described the action brilliantly. Medina Spirit, Mandaloun, Hot Rod Charlie, and Essential Quality tussled with each other throughout the stretch run, and it wasn’t clear who was going to win until the final few strides. Stone never missed a beat, adding just the right layer of drama to the action while precisely describing the multi-way battle. In the end, Medina Spirit held on to win by a half-length as Stone puncuated his call with, “Medina Spirit DID IT!”

The 2021 Belmont marked the eleventh time race-calling veteran Larry Collmus would announce the “Test of the Champion.”  It was one of the most thrilling Belmonts he’s ever called, as Essential Quality and Hot Rod Charlie engaged each other in an exciting stretch duel.

Collmus introduced the stretch run with his trademark line, “AND THEY’RE INTO THE STRETCH!” As Essential Quality began to pull clear, Collmus began to emphasize his name more. As they came down to the wire, Collmus capped off the call with “ESSENTIAL QUALITY! TOO GOOD!”

Longtime NYRA backup caller John Imbriale became the full-time announcer in 2020 and he called his first Travers last year before a fanless Saratoga. This year, before a crowd of more than 44,000, Imbriale made his second Travers call a memorable one, describing a thriller between Essential Quality and Midnight Bourbon.

A few weeks prior to the Travers, Imbriale lent his voice to another piece of racing history. When Stellar Tap won the fifth race at Saratoga on Aug. 7, Steve Asmussen won his 9,446th career race, and became North America’s all-time winningest trainer. Fully attuned to the magnitude of the moment, Imbriale delievered an excellent soundtrack to Asmussen’s milestone win.

Few announcers are more closely associated with one track than Dave Rodman is with Pimlico. He’s been the announcer there since 1991 and has announced 31 consecutive Preaknesses.

As he does every year, Rodman delivered an excellent description of the Preakness. He picked up Rombauer’s move as the field entered the stretch and called him home to an upset victory.

Japanese runners had a great showing at this year’s Breeders’ Cup, and perhaps none were more enthralling than Loves Only You. She got up in the last few strides to win after a multi-way stretch duel. Collmus made sure the audience knew the significance of the moment, puncuating his call with “Loves Only You, to win it, FOR JAPAN!”