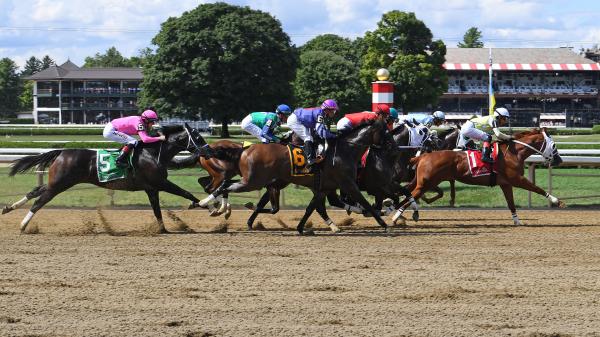 Race 2 Saturday at Saratoga Race Course actually features a prior pedigree play, Powerful, whose pedigree reflects affinity. This Steve Asmussen trainee proved the angle to be an honest one, even if he had to settle for coming up a head short in the end on debut. Powerful should only be better with the experience and now getting an extra furlong with which to play. That being typed, he is 2-1 on the morning-line, and bettors are likely to further endorse him considering the fourth-place finisher in Powerful’s debut, Summonyourcourage, recently put up an 80 Beyer Speed Figure when running second to another Asmussen trainee who dropped our jaws, Echo Again. While I, too, think it’s likely Powerful gets the job done in his second start, I am going to focus this write-up on a colt who could potentially spice things up at a very generous price.

#3 Fightertown is one of two entries for Hall of Fame trainer Bill Mott, who also saddles #6 Parkway. Based on their morning workouts, it appears the former has a bit more speed – but of course, the afternoon can always prove a different story.

Fightertown is a son of stallion sensation Into Mischief, who stands at Spendthrift Farm. Fightertown is also a homebred for Godolphin, meaning they owned the dam (mother) at the time of foaling (birth) and still own the colt. In some cases, a breeder may have leased the dam or have a foal-sharing arrangement in place. In this particular case, Fightertown’s dam, In Step, was purchased in 2009 for $1 million as a Keeneland September yearling by John Ferguson for Sheikh Mohammed bin Rashid al-Maktoum’s Darley Stable, which has since merged with his other global operation, Godolphin.

In Step is herself a daughter of 1995’s Breeders’ Cup Juvenile champion, and star sire, the late Unbridled’s Song. Though it was at age 3, she won her debut against a maiden special weight field at Gulfstream Park, sprinting 6 ½ furlongs, and later became a stakes winner on the grass, prevailing in the Queen Tutta Stakes prior to coming up just a half-length short of winning the Grade 3 Pin Oak Valley View Stakes. She later produced, on a cover of Darley homebred stallion Bernardini, the colt Hemsworth. Hemsworth’s first win came in the third start of his career as a 2-year-old, when he wired the field in the Grade 2 Nashua Stakes. Granted, there were only three other horses he defeated that day, but there are further reasons to like Fightertown’s chances if you do not find that compelling enough.

In Step sold for $1 million with good reason. She is a half-sister (same dam [mother], different sire [father]) to two graded stakes winners who both went on to be sires: Scipion, who won his 2-year-old debut at Saratoga, and 2002’s Eclipse Award winner as champion 2-year-old male, the undefeated Vindication, whose wins include the Breeders’ Cup Juvenile. These boys are three-quarter brothers, as Scipion is by A.P. Indy, and Vindication is by A.P. Indy’s own sire, Seattle Slew. With that in mind, it makes sense that Godolphin tried the cross of In Step with Bernardini, a son of A.P. Indy.

While In Step had a filly by Into Mischief in 2019 named Summer Secret, she is unraced. Therefore, Fightertown will be the first foal representing this pairing to race. Horses by Into Mischief out of Unbridled’s Song mares include Party Boat, who won the Wait a While Stakes as a 2-year-old. What is truly impressive, however, is the cross of Into Mischief over Unbridled’s Song’s own sire, Unbridled. All six runners representing that cross were winners, three of them earning black-type (meaning they won a stakes race, which is bolded in black type on their pedigree page). The best of that group was 2019’s Eclipse Award winner as both champion female sprinter and champion 3-year-old filly, Covfefe.

Just one more fun pedigree note… Fightertown’s fourth dam (great-great maternal grandmother) is Mysore, by Amarullah. Mysore is a three-quarter sister to Cornish Prince, by the legendary sire Bold Ruler (whose foals include Secretariat). Cornish Prince won the 1964 Sanford Stakes at Saratoga. He was a homebred for the late George D. Widener Jr.’s Erdenheim Farm (Erdenheim Farm, now owned by the McCausland family, has a well-bred firster on Saratoga’s Saturday card in Race 1 named Scramble, by the way). Cornish Prince went to stand stud at Spendthrift Farm, and one of his daughters, bred by Erdenheim Farm, is Patelin. Patelin is the 4th dam of blue hen mare Leslie’s Lady, whose own babies include Hall of Famer Beholder, Mendelssohn, and… Into Mischief.