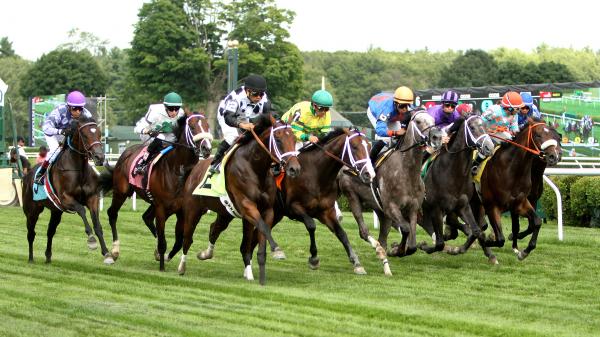 Apologies for being a chalk-eater this week, but it’s truly hard to ignore a horse when he’s bred top and bottom for grass and has more than a legitimate excuse for not justifying the favoritism at first asking.

Yes, I am writing about #6 Activist Investing, who is the 5-2 morning-line favorite in Race 5 at Saratoga Race Course this Saturday. First, as this is a pedigree column, let us chat about those genetics. Again, top and bottom, the ingredients brought to the table by both sire (father) and dam (mother), are those of quality turf influences. You don’t need to dig to see that, as you’ll note the grass-centric racing origins of family members right in the program: Great Britain (GB), Ireland (IRE), Australia (AUS).

Now, starting at the top, Activist Investing is a son of 2014 European Horse of the Year Kingman. Kingman won his 2-year-old debut at Newmarket going seven furlongs on the straight for trainer John Gosden, and crossed the finish line six lengths the best. He then added the Group 3 Solario Stakes to his juvenile resume before coming back at 3 years old. That Cartier Horse of the Year season included winning streak comprised of four Group 1 wins at a mile: the Tattersalls Irish Two Thousand Guineas, St. James’s Palace Stakes, QIPCO Sussex Stakes, and Prix du Haras de Fresnay-Le-Buffard Jacques Le Marois.

On the bottom, Activist Investing’ dam is Astronomy’s Choice. She broke her maiden at first asking as a 2-year-old going seven furlongs at Newmarket for Gosden and jockey Frankie Dettori. Then, at the same track and in her first start at 3, she collected black type with a show-dough finish in the 1 ¼-mile Tweenhills Pretty Polly Stakes. Like her son, Astronomy’s Choice is bred top and bottom for grass, being a daughter of Australian leading sire Redoute’s Choice and out of Astronomy Domine, a daughter of another champion of track and breeding shed in Galileo.

Astronomy Domine is a half-sister to stakes winner Prudenzia, who is better known as the dam of another Galileo scion in Magic Wand, whose wins include the Group 1 MacKinnon Stakes at Flemington but who also put up sensational runner-up performances in a number of Group and Grade 1 contests, such as the Prix de l’Opera Longines, Arlington Million, QIPCO Irish Champion Stakes, Longines Hong Kong Cup, and Pegasus World Cup Turf Invitational. Prudenzia also is the dam of 2014 Darley Irish Oaks winner Chicquita.

The family is also responsible for another Irish Oaks winner in the high-weighted Alexandrova, who also won the 2006 Vodafone Epsom Oaks and Darley Yorkshire Oaks. As if this weren’t enough class to intrigue, another bloom off this tree is Rekindling, who was a champion stayer in Australia.

Yes, those pedigree credentials are there, and so are the excuses if you watch the replay of his debut. Activist Investing had an awful trip from the jump on debut, getting away from the gate kind of wonky. Wideright, who is drawn to his outside in Saturday’s race, made his first start that same day, too, and got completely keyed up to the inside of Activist Investing after getting in tight, rough quarters. Wideright then proved aptly named, forcing Activist Investing out devastatingly wide into the first turn. The Kingman colt went on to make a very impressive move down the backstretch, but understandably flattened out after turning for home. Still, it appeared he wanted to persevere, which makes you hope that now, with the experience and, hopefully, a smoother trip, he reflects what the pedigree suggests he is meant to do … top and bottom.