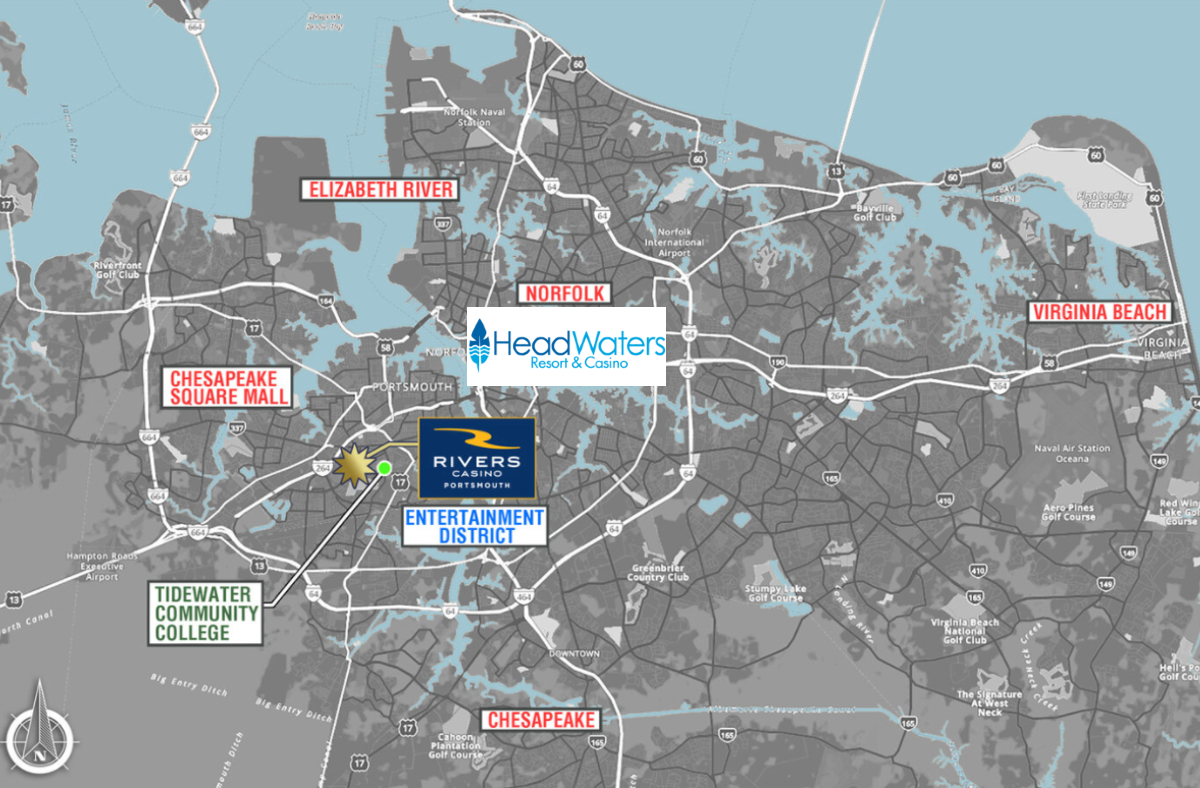 Richmond voters rejected a local ballot referendum on Election Day asking if they support allowing a single commercial gaming development to be built in the Virginia capital city.

Rivers Casino Portsmouth and HeadWaters Resort & Casino in Virginia’s Hampton Roads will benefit from the absence of a casino in Richmond. Voters in the capital city said no last week to a proposed gaming project. (Image: Casino.org)

Urban One, a publicly traded media conglomerate, and casino operator Peninsula Pacific Entertainment (P2E), had proposed constructing a $565 million casino resort. The project was called ONE Casino + Resort and would have been located near the Philip Morris tobacco plant south of the James River along I-95. But Richmond voters said no, some 51.2 percent of the local ballots cast going against the commercial gambling pitch.

Richmonders folding on the city’s casino bet was a major win for the two gaming developments under construction in Norfolk and Portsmouth. That’s according to Bob McNab, an economics professor at Old Dominion University in Norfolk.

McNab says the approved casinos, which were ratified by way of successful local ballot referendums during the 2020 fall presidential election, will benefit from not having ONE Casino in Richmond.

At the end of the day, the short story is the defeat of the Richmond casino referendum boosts the prospects of the casinos incrementally,” McNab declared to The Virginian-Pilot.

While Richmond turned down its casino rights, the four other Virginia cities that qualified to consider using a gaming resort as an economic stimulator did not. Along with Norfolk and Portsmouth, casinos are being built in Danville and Bristol.

Hampton Roads refers to nine independent cities in the area where the Hames, Nansemond, and Elizabeth rivers converge. Two of those cities are Norfolk and Portsmouth.

Portsmouth is running with a casino resort development from Chicago-based Rush Street Gaming and its Rivers casino brand. The $300 million project — Rivers Casino Portsmouth — is under construction just south of I-264 between Victory Blvd. and McLean St., adjacent to Tidewater Community College.

The two casino sites are just five miles apart as the crow flies. With approximately $800 million set for investment in the two properties, McNab says not having a casino in Richmond some 70 miles northwest along the major I-95 artery makes the projects much more feasible.

“The proposed casino in Richmond would have essentially blocked traffic from Richmond and northern Virginia from coming down to the casinos in Norfolk and Portsmouth,” McNab declared.

McNab explains that casino customers are typically willing to travel up to two hours to test their luck, meaning the Norfolk and Portsmouth resorts should be able to tap into the capital city for business. Richmond is the fifth-most populated city in Virginia, with an estimated 233,000 residents, while Norfolk is No. 3 (241,000) and Portsmouth is No. 11 (93,700).

McNab said other businesses could suffer in the immediate areas surrounding the two casinos.

Calling it “displacement,” McNab rationalizes that other regional tourism attractions, restaurants, and hotels could see reduced business, as that economic activity goes to HeadWaters and Rivers. One solution, he said, is for the Hampton Roads casinos and their local governments to work together to market the region as a destination with two casinos, but also an abundance of things to do and visit.

2021-11-09
Previous Post: » Which CFB Head Coach Will Be Next on the Chopping Block?
Next Post: Golden Nugget to Welcome DraftKings Sportsbook on Wednesday