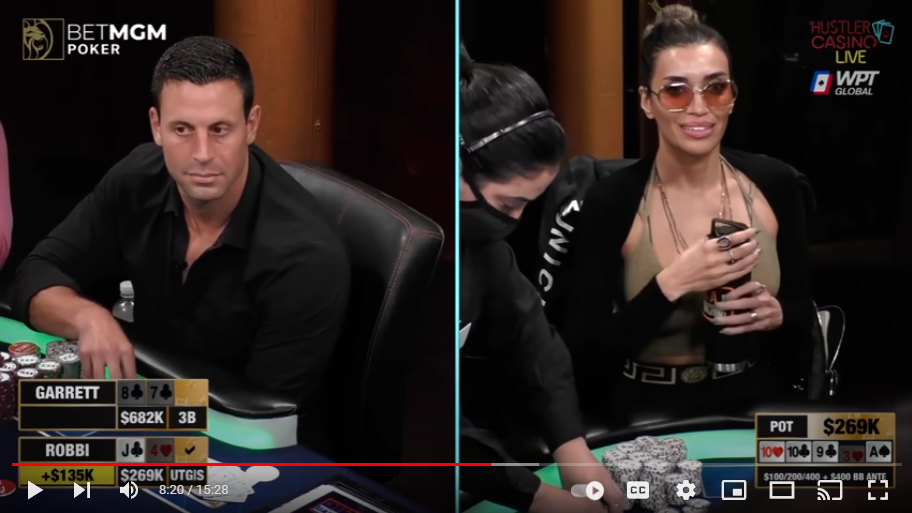 It’s been over three weeks since the poker hand that got everyone’s attention played out on the “Hustler Casino Live” show, and yet, it’s still the top story on every poker news outlet and Twitter conversation. Recently, a few bits of breaking news have bolstered Robbi Jade Lew’s position, while Garret Adelstein has told his story through the LA Times. Let’s dive into the updates around this intriguing poker drama.

Adelstein and Lew in the aftermath of the hand, yet just the beginning of the drama. (Image: Youtube Hustler Casino Live)

Poker’s latest soap opera is chock full of drama that’s keeping everyone guessing as to who the real villain of this story actually is. As such, here’s a quick recap of the latest twists and turns.

Latest from Lew and Adelstein

In a story that’s been chock-full of inconsistencies, one thing has remained the same since the beginning: Robbi Jade Lew has stood her ground in claiming her innocence of any wrongdoing. Lew has appeared on Joey Ingram’s Investigative Podcast multiple times and has done other media interviews, the whole time maintaining her innocence.

Another day in the office??? Depends who you ask! 🤷🏻‍♀️ 4 UPDATES to report:

And now, she has test results that back up her story. Lew revealed that she passed a polygraph test in Las Vegas earlier this week. While a full list of questions has yet to be provided, these were three crucial questions to which Lew answered “no,” registering as truthful each time. 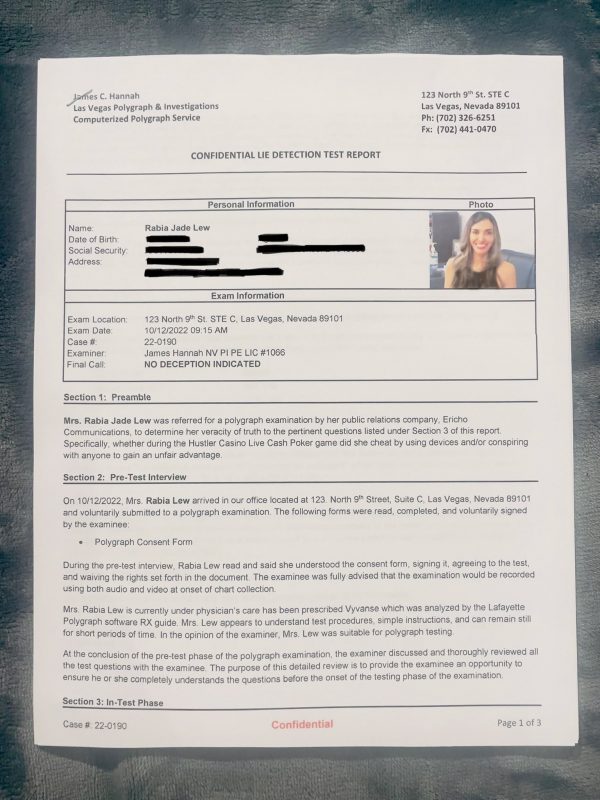 Robbi Jade Lew posted this photo on her Twitter, as part of her positive polygraph test. (Image Credit: Twitter/@RobbiJadeLew)

The other big piece of news from Camp Lew is her decision to now press charges against Bryan Sagbigsal, the former Hustler Casino Live employee who was caught stealing $15K from her stack after she left the poker table following the now infamous hand. Lew initially declined to press charges against Sagbigsal, but changed her mind after learning about his past.

It is still unclear as to why Lew said in her original statement that she was told he didn’t have a criminal record.

Sagbigsal has yet to appear on any public forum under advisement from his attorney. An account bearing his name did go on a lengthy rant on twoplustwo, but it remains to be confirmed if it is actually Sagbigsal, or simply an elaborate hoax from an internet troll.

The LA Times wrote a feature piece about Lew last week and has now released a profile of Adelstein in the wake of the massive hand. Adelstein has largely remained out of the media spotlight since the hand, though he did post a lengthy description of his account that was summarized by CardsChat earlier this week. He has also liked a few tweets defending him, but hasn’t had much else to say on the matter.

“Hustler Casino Live” has obviously come under heavy criticism since a thief was caught in their studio, and they are looking to move forward from that after swiftly letting him go. The show’s producers put out a statement saying they will continue to stream their show after getting approval from the California Bureau of Gambling Control, though many were quick to point out that this is the same Bureau that cleared Mike Postle of any wrongdoing in that infamous cheating scandal.

The two co-founders of HCL, Ryan Feldman and Nick Vertucci, have both been quieter in recent days than before. Feldman has mainly been promoting whatever new show is on that night. He did post a lengthy defense of himself on twoplustwo responding to allegations of potential previous wrongdoing on Live at the Bike, and also tweeted a defense of a hot mic situation on Oct 10, but that’s been about it.

Why don’t you just ask what this is instead of assuming? We had an audio glitch that day that I had to fix. Our live mics were going thru our delayed feed cuz an audio layer on the sound board was accidentally turned on. Took me a while to realize what it was and fix it.

Vertucci had been vocally defensive on his Twitter account for quite a while, but seems to have pulled back a bit as well. You can see a change in tone below.

Not defensive this is just not the platform for this. Mac can do or say whatever he wants. But debating him on social media or discussing any of this on social media is not gonna happen. We will put out our full report when this is over.

Matt Berkey was one of many who criticized the show, even going so far as to say on Twitter and his podcast that Hustler should stop livestreaming shows immediately until a full investigation can be completed.

Former poker pro and Jeopardy Champion Alex Jacob is one person who’s been vocal in his defense of Lew, even going so far as to call out Adelstein and multiple others who have supported him so far.

Robbi’s polygraph showed that there was a less than 1/10th of 1 percent chance that she was being deceptive. pic.twitter.com/FCFS5Gz2vd

.@GmanPoker you are digging yourself a deeper and deeper hole. End this. https://t.co/s6aF0WWZ4q

I’m sorry Garrett but this tweet belongs in the irony hall of fame. https://t.co/cxyb374OyR

Doug Polk, who released a lengthy video explaining why he thinks Lew was cheating, has since moved the needle ever so slightly to the middle, though he still seems to heavily believe there was some foul play involved.

Also no one taking the quarter million bounty also decreases the chances she was cheating.

I still think its overwhelmingly likely but id probably update from ~98% down to ~85-90% or so.

Where do you fall on the cheat or no cheat scale after the latest news? Let us know what you think in the comments.