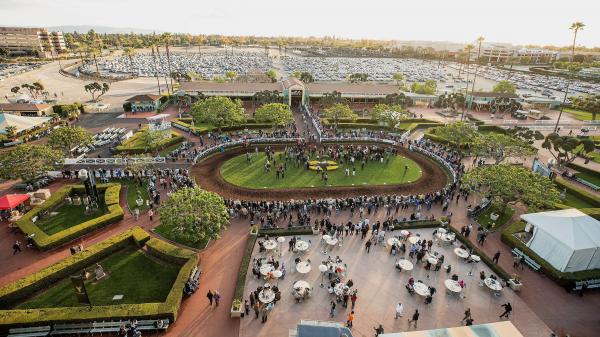 Horse racing fans get the holiday gift they really want – albeit a day late – when the SoCal winter racing season celebrates its traditional post-Christmas opening day on Dec. 26 at Santa Anita Park. That date marks the start of a new season in racing at the Arcadia, Calif., track and kicks off one of the country’s premier annual winter/spring race meets.

The Santa Anita season actually is two meets, with the main winter-spring “Classic” meet ending on April 9 and going out with a bang closing weekend – first with Runhappy Santa Anita Derby Day on April 8 and then mandatory payouts of all carryover pools on April 9. After a break from April 10-21, racing at Santa Anita will resume with its spring season going from April 22 through June 18.  Along the way, a long list of major stakes races will be run in every non-juvenile division, including such traditional Grade 1 features as the Santa Anita Handicap Presented by Yaamava’ Resort and Casino at San Manuel, which will be run on a four-stakes card March 4.

Racing at Santa Anita will be conducted mainly on a four-day-a-week basis, Thursdays through Sundays, plus holidays. A new bet offered during the Classic Meet is $1 Coast to Coast Pick 5, coupling up with fellow Stronach Group track Gulfstream Park and featuring a 15 percent takeout. The wager kicks off Saturday, Jan. 7 and will be offered every Saturday and Sunday throughout the upcoming Classic Meet.

Jockeys and Trainers to Watch

Santa Anita will have one of its most talented, diverse, and interesting jockey colonies in recent years when racing kicks off at the Classic meet on Dec. 26. John Velazquez will ride the meet, along with fellow Hall of Famer Mike Smith. Flavien Prat will be back in SoCal this season after his forays to Kentucky and New York proved successful in 2022. The runaway leading rider at the 2021-22 Santa Anita meet, Juan Hernandez will still be favored to defend his jockey title after winning 104 races from 455 mounts (23%) here last season, but competition will be stiff. Ramon Vazquez beat Hernandez 25 wins to 20 to capture the 2022 fall meet riding title, and Umberto Rispoli (18 wins, 24%) and Edwin Maldonado (17 wins, 19%) are also coming off good seasons at the most recent Santa Anita meet. The runaway leading rider at Woodbine the last two years, Kazushi Kimura will move his tack to Santa Anita for the first time this winter, as will perhaps the most fascinating addition to the SA jock’s room, Frankie Dettori, who is one of the most prominent international riders of the past few decades. Dettori, 51, will be represented by all-star jockey agent Ron Anderson, so you know he’ll be choosing from a roster of live turf runners all season (Dettori also announced that he will retire after 2023 and plans to wrap up his legendary career back at Santa Anita for the Breeders’ Cup). Also on hand trying to make a career resurgence will be Hall of Famer Kent Desormeaux.

Getting to Know the Great Race Place

Let’s get to know the “Great Race Place” by taking a quick look at some prevailing biases at  Santa Anita in various kinds of races.

In terms of running style preferences and the winning track profile on the main track at Santa Anita, speed tends to be very good in the shorter sprints, particularly 5 ½ furlongs and six furlongs. At 5 ½ furlongs, about 40% of the winners can be expected to go wire-to-wire, and even at the most commonly run sprint distance of six furlongs, front-runners still win one-third of the races. Horses that race on or close to the lead tend to enjoy a tactical advantage at all distances on the main track. The best distance to bet off-the-pace runners is at one mile, where frontrunners win only 25% of the time and the preferred running style belongs to the pace pressers and perhaps close-up stalkers.

Santa Anita’s main track is not particularly well known for having a lot of post position biases and angles, but the track does actually favor certain posts at certain distances. Based on past statistics the inside posts usually are preferred in dirt sprints, with a drop-off in effectiveness noted outside of post 6. At the most recent meet run at Santa Anita, fall 2022, he three inside and three middle posts all had similar percentages, but horses breaking outside of post 6 had a combined five wins from 58 starters in dirt sprints (8.6%). One out of every 10 dirt sprints run at the meet was won by a horse breaking from posts 7-12.

In Santa Anita dirt route races, the rail post is often the place to be at both one mile and 1 1/16 miles. Beyond the rail being good, you usually do not see much bias in terms of post positions until you get to the far outside posts, which can occasionally be a disadvantage outside post 6 in two-turn races.

Santa Anita’s turf course is home to some of the country’s best grass racing over the winter. Santa Anita’s grass course generally plays very fairly to all running styles and running paths, with horses routinely being able to win races both on the lead (20% wire-to-wire winners in turf routes), or from various margins off the pace as well. Obviously, it is better to save as much ground and possible and stay within a workable striking distance of the lead, and this is evidenced by the fact that the rail is the preferred post draw in Santa Anita turf routes, and all the inside posts outperform all of the middle and outside posts in terms of win percentage. Perhaps in a statistical anomaly, horses from the rail in turf routes went only 3-for-47 (6%) in fall 2022, when the best post draws were posts 2-6. Deep closers can win, but often they lose too much ground making those wide late moves, and that gives the leaders, pressers, and stalkers a good shot at holding-on in the relatively short Santa Anita grass course stretch run. Days when the turf is less-than-firm provide the best chance for horses to come from a bit further off-the-pace.

And then there are the turf sprints, which have been a bit of a work-in-progress these past few years with Santa Anita having renovated its signature downhill turf course and also constructing a new backstretch turf sprint chute so they can run flat turf sprints at a variety of distances. Those turf sprints from the backstretch chute favor speed or horses able to stay within one or two lengths of the lead at the first call. Downhill turf sprints are generally fair to all running styles.

The overall Santa Anita turf sprint post-position statistics combine downhill sprints and sprints out of the chute, but the races have very different preferences. The best post positions in the flat turf sprints are posts 1-4 (at a recent meet, 22 of the 31 flat turf sprints were won by horses breaking from posts 1-4 while starters from all other gates went a combined 9-for-123). The downhill turf sprints, meanwhile, favor horses with middle and outside posts while posts 1-2-3 have long been considered disadvantages.

Pay close attention to the winning profiles at Santa Anita and you will have a leg-up on the betting public at Santa Anita. Most of all, enjoy a great season at The Great Race Place. Best of luck at Santa Anita!