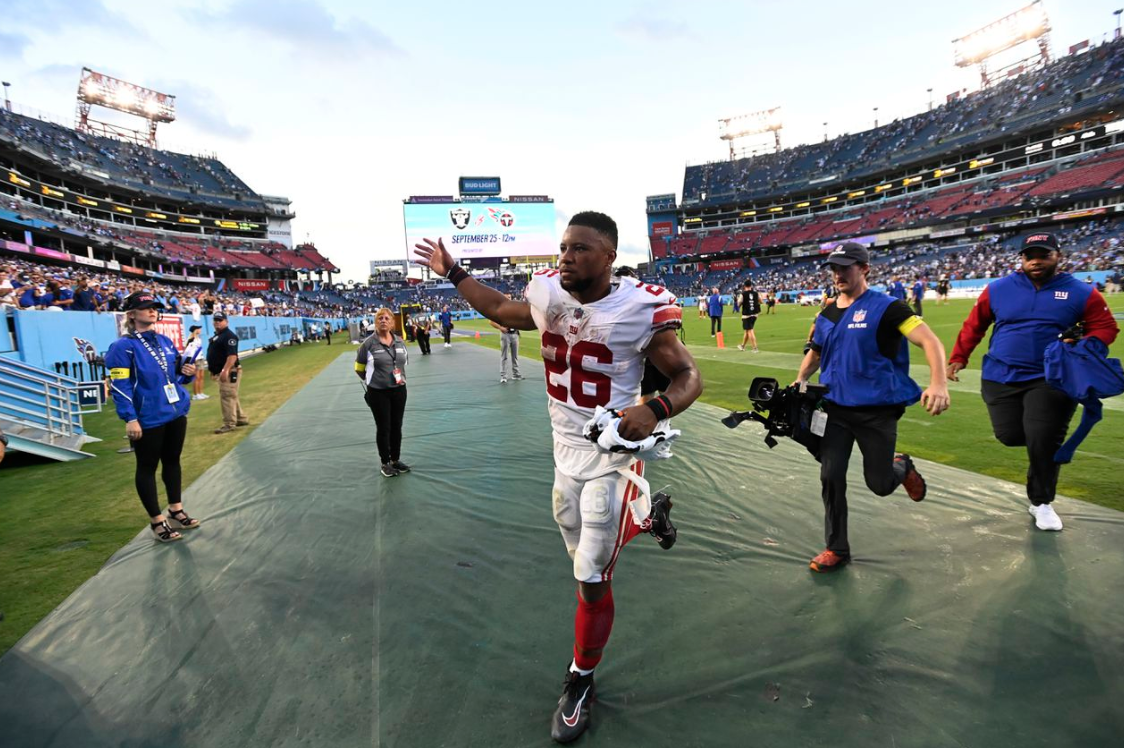 Saquon Barkley wants to be the NFL’s highest-paid running back, and he is coming off his heaviest workload of the season, 35 carries, last week in a win over the Houston Texans. When he plays Sunday against the Detroit Lions, he can expect a similar amount of rushes, since most of New York’s receiving corps is injured.

Barkley rushed for 152 yards last week, easily surpassing his over/under for rushing yards, which has never been set above 100 yards in nine games this season. Those 152 yards came against Houston’s NFL- worst rushing defense, and this week he goes against a Detroit Lions team that has the second-worst rushing defense.

The Giants are again a low point-spread favorite against a far weaker opponent. Three quarters of the wagers and 76% of the handle at DraftKings Sportsbook are coming in on New York to cover the 3-point spread against Detroit. The Lions enter this game with a 3-6 record, but have won two in a row against NFC North Division opponents Green Bay and Chicago.

The Lions allowed 258 rushing yards against Chicago, yet still rallied with three fourth-quarter touchdowns in a 31-30 victory. That win snapped a 13-game road losing streak and gave them their first back-to-back wins since October, 2020. So while the Lions are far from .500, the Giants would be ill-advised to take lightly the weakest opponent on their remaining schedule.

Getting Ziggy with it from our last trip to Metlife #TBT

Props to the Lions’ social media staff for coming up with those clips, which date back to 2017, when Eli Manning was quarterbacking the Giants and Barkley was a senior at Penn State.

Now in his fifth season, Barkley is second in the NFL in rushing yardage with 931, trailing Tennessee’s Derrick Henry by 79 yards. Henry had just 87 against the Packers on Thursday night, so Barkley can take over the league lead if he reaches his average of 103.4 yards per game. With his over/under set at 98 1/2, that is probably a good place for Giants bettors to start with their player props when making their wagers on this Sunday’s 1 p.m. start.

Will Anyone Be Watching?

This could be one of the least-viewed Giants games of the season. That’s since it is going up against the Jets-Patriots game that we previewed yesterday with an anecdote about your garden variety Jets fan.  Both the Giants and Jets have plenty at stake. But Gang Green’s road game to try to end a 13-game losing streak against Bill Belichick is far more tantalizing.

But because the Giants cannot help themselves from playing close games, this one is probably worth keeping on a split screen at home. Or better yet, being watched at a pubic watering hole with multiple televisions and multiple spectators, many of whom will be in-game gambling now that the nine sportsbooks licensed in New York are pushing that option harder than they ever have … although one of those books is taking a curious approach to courting Giants fans by posting this to their Twitter account Saturday:

With the Giants attempting to run out the clock, Herm Edwards returns a fumble recovery for a touchdown in the Miracle at the Meadowlands.

Both the Giants and Eagles would add a Victory Formation play to their offense a week later.pic.twitter.com/AtEKOT3aeC

The Barkley Factor – He Wants a Supercontract

The Giants and Barkley were unable to come to a financial agreement when discussing a second contract earlier this month. There is a widely-held belief in the NFL that is is almost always a bad idea to give massive money to a heavily-used tailback.

Giants management already has to have some buyers remorse after signing wide receiver Kenny Golladay to a four-year, $72 million contract two off-seasons ago. In 19 games since, he has produced zero touchdowns. He was benched in the second half last week after dropping an easy catch. Golladay is questionable Sunday, along with receiver Wan’Dale Robinson, as both deal with hamstring injuries.

That leaves the Giants very thin on experience among their receiving corps, which increases the likelihood they will run the ball behind an offensive line that has blocked and opened enough running holes to give the Giants the NFL’s third-ranked rushing offense (164.8 yards per game) behind only Chicago and Baltimore.

Barkley, who has 36.5 % of the Giants’ yards from scrimmage and 31.5 % percent  of the touchdowns, could command more than the $16 million per season being given to running back Christian McCaffrey. But in order to get to that salary level, Barkley will need to remain highly productive over the remainder of this season’s schedule, which gets interesting quickly with a Thanksgiving Day game against the Dallas Cowboys. That begins a stretch of four straight divisional opponents.

Their next three are against Washington, Philadelphia and Washington as the battle for the NFC East title plays out. New York (7-2)  is an enticing +1000 to finish atop the division, which is led by the 8-1 Eagles, who are favored by 7 at Indianapolis this Sunday.

An over on Barkley’s over/under for rushing yardage (98 1/2) would almost certainly require him to have his first back-to-back 100-yard rushing game since December, 2019, which was almost three years ago. Both the over and the under on Barkley’s rushing yards are -115.

A new contract was never close to being completed during talks during the Giants’ bye week, ESPN reported.

“That means I did something good to have that conversation during the bye week,” Barkley told the New York Post. When it gets brought up again, we’ll indulge in it. Until then, I can only focus on winning every game we can.”

What Giants’ Wagers Are Worth Considering?

The passing yardage over/under for Daniel Jones is 196 1/2, and he is +185 to throw two or more TD passes for the fourth time this season. Because of the shortage among their regular receivers, the only receiving yardage over/unders are Darius Slayton (39 1/2) and Barkley (21 1/2).

Barkley has not had a multiple TD game all season. He is on the board at FanDuel Sportsbook at +300 to score two or more touchdowns, while Slayton is +1700. To score three or more TDs, Barkley is +1000.

Slayton is down significantly this week to +155 to be an anytime TD scorer, perhaps because of this sideline sprint against the Texans:

How this turned into a touchdown? We have no idea.

Because of the expected Barkleycentric-nature of what is expected from the Giants at MetLife Stadium, bettors are advised to check the same-game parlay options offered Sunday morning. That’s after the books adjust to Saturday’s wagering trends and adjust accordingly.

The spread is 3 in large part because the Giants’ victories have come by 1, 3, 8, 5, 4, 6 and 8 points. They are 7-2 against the spread, second-best in the NFL behind Tennessee. The Lions have surrendered an NFL-high 264 points and thus have gone over in six of nine. The Giants have gone under in four straight games.