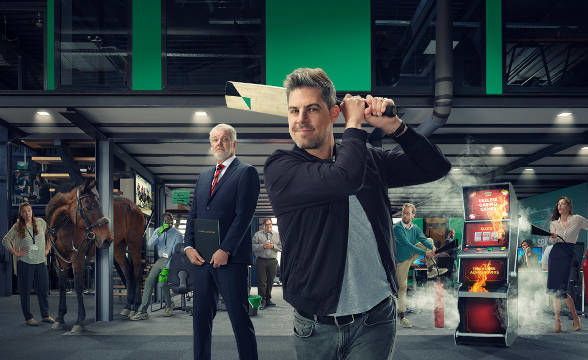 The leading betting exchange, Smarkets, announced a new advertising campaign for its SBK sportsbook. The campaign was launched under the slogan “The ad we weren’t allowed to make. But we made it anyway.” Although it was banned from TV, the sportsbook went ahead to launch the ad via its website.

SBK Unveils “The Ad We Weren’t Allowed to Make. But We Made It Anyway.”

The new ad starts with Trost speaking about sports and sports betting. While passing a football around, he points to a chart showing a graph with earnings and says “just look how much these ***** are making from you.” After that, the screen fills with comments accusing sportsbook winners of cheating. Then Trost is asked how competitor sportsbooks continue to profit from sports fans. He explains that those operators give the players bad odds but also push “useless casino games.”

“We built a product that gives you the best odds that doesn’t just beef up our profits. So no more gimmicks, and no more retired soccer players trying to sell you a bet boost,”

In the next scene of the advertisement, Trost slams a baseball and smashes a slot machine with it. He then agrees with a coworker that sportsbooks that only inflate their winnings makes him angry, which is a prime reason why SBK was created. According to Trost, SBK looks to give its players the best odds. The ad concludes with SBK’s CEO and founder saying: “We’re SBK and we’re here to rewrite the sportsbook.”

We’re here to level the playing field for everyone – by giving our customers the best odds around. No strings attached.

The New Ad Did Not Receive Approval to Air on TV

Sharing his excitement Trost said that it was fun to film the new ad. He added: “I hope people enjoy watching it as much as I did making it.” Speaking about the competition, Trost said that the “old guard” has been giving bad odds for its customers for too long. He added that this is one of the reasons why SBK launched – to offer the best pricing and odds. Last but not least, Trost said: “That’s what this campaign is all about: how our odds are better than the rest who make easy money on casino products and huge sportsbook margins, and we’re not afraid to call them out.”

The video clearing organization, Clearcast, did not permit SBK to launch its new ad on TV. It said that the nature of the ad would “bring advertising into disrepute.” Regardless, as stated in its slogan, SBK went on to create the ad, even though it was aware it would not air on TV.