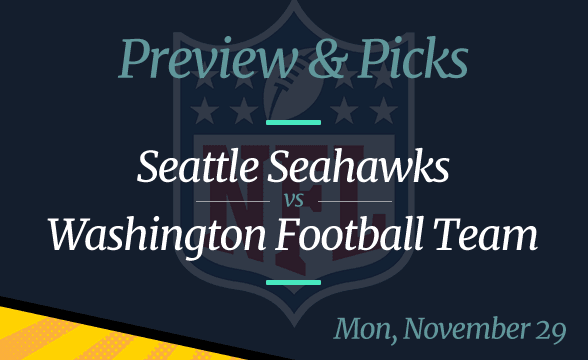 Monday Night Football takes us to FedEx Field in Landover, where the Washington Football Team (4-6) will welcome the Seattle Seahawks (3-7). Neither team can be too proud of their current record, but they still have a chance to improve it.

The chances of WFT to get to the postseason are pretty decent. It’s not just that they’re in good form with back-to-back wins, but it’s also because their schedule doesn’t look too harsh. For the Seahawks, the Week 12 game could be crucial. Losing a third straight game could mean the end of their playoff hopes.

All odds are per FanDuel as of November 26.

Russell Wilson Needs to Up His Game

The Seahawks have been in a dreadful run, losing five of their previous six games. The franchise legend, quarterback Russell Wilson missed four of those games due to an injury. He returned in Week 11, but failed to do much. His team lost to the Arizona Cardinals at home 23-13.

Losing to the Cards isn’t something they should be ashamed of. After all, the same happened to seven other teams. Plus, their defense did relatively well against one of the league’s deadliest offenses.

The Seahawks offense scored only 13 points, with just one touchdown scored by running back DeeJay Dallas. Wilson made no touchdown passes for the second game in a row. Previously, he failed to throw a TD pass in the Week 10 loss against the Green Bay Packers.

Should this worry the Seahawks? Probably not, as Wilson has proved numerous times that he’s one of the best QBs in the league. The 7-time Pro Bowler just needs to get back in shape, and the game against the WFT seems like an ideal opportunity for that.

Washington has a pretty good chance to get to the postseason, even though their current record isn’t that great. They’re 4-6 on the season, but there are a couple of winnable games coming their way. Excluding the two games against their divisional rivals, the Dallas Cowboys, their schedule doesn’t look too ugly.

Of course, there are no easy games in the NFL, but if the WFT continue playing as they’ve been over the last couple of weeks, they have every right to hope for the playoffs.

This team won their previous two games, in each of which they were the underdog. First, they beat the reigning NFL champs, the Tampa Bay Buccaneers 29-19 in Week 10. Then, in Week 11, they beat the Carolina Panthers 27-21 on the road.

Still, there is a caveat. Washington wasn’t as good in those two games as its opponents were bad. Tampa’s QB Tom Brady had a poor outing that day, while Carolina was without several key men.

It would be crazy to assume that luck’s going to follow the WFT in Week 13, in which they take on super-motivated Seahawks.

Pick: Seattle Seahawks to win; over to hit.