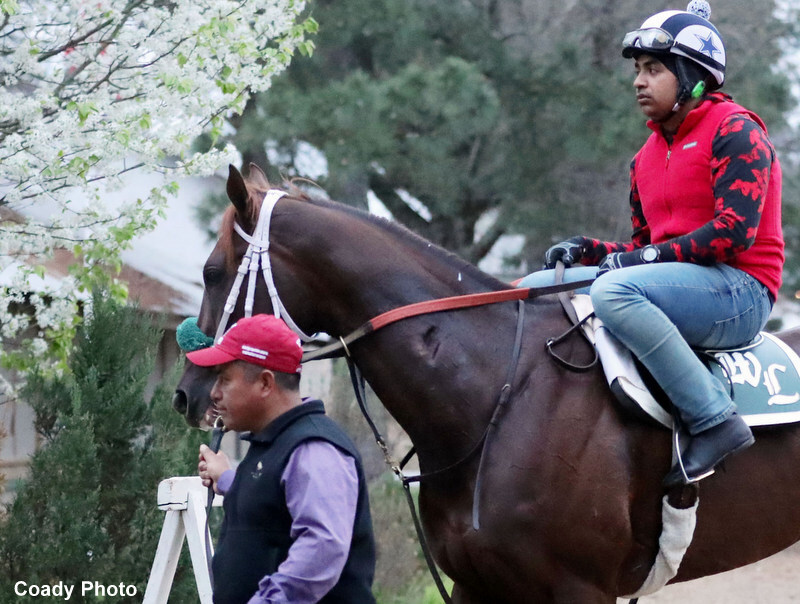 Secret Oath, with the ‘prophet’s thumbprint’ clearly visible on her neck

The ultra-talented 3-year-old filly Secret Oath was so dominant over her female competition at Oaklawn Park that her trainer, Hall of Famer D. Wayne Lukas, decided to run her against males in the Grade 1 Arkansas Derby. Though she had a tough trip and could only manage third on the day, Secret Oath remains poised as one of the top fillies headed to this year’s Kentucky Oaks.

She’ll bring along with her the story of an age-old equine legend from the Thoroughbred’s long-ago ancestor, the Arabian.

It is said that the Prophet Muhammad wandered the desert with his herd of Arabian mares for many days. Finally approaching an oasis, he sent the mares forth to allow them a drink. Before they reached the water, however, the prophet called them back. Only five of the mares stopped and returned to him. In honor of their loyalty, he blessed the mares by pressing his thumbprint into their necks.

It is believed that a horse with such a mark will be outstanding because they are a descendant of one of the broodmares that the prophet, Muhammad, truly treasured.

Secret Oath has a mark on the left side of her neck which echoes the legend, often called the “Prophet’s thumbprint” or “God’s thumbprint.”

Several veterinary theories as to the cause of such a mark exist; it may be caused by an injury, or by the pressure of a hoof or the umbilical cord while in utero.

Owner and breeder Robert Mitchell (of Briland Farm) said the filly was not born with the mark, but instead it appeared late in her yearling year. There was no other mark or issue to indicate an injury, so Mitchell isn’t sure where it came from.

The Mitchells’ entrance into the Thoroughbred industry began with a $1 broodmare named Chao Praya. Mated to Level Sands (Storm Cat) for a fee of $1,500, the mare produced Level Playingfield, who became a graded stakes winner, multiple stakes winner, and a track record-setter.

That success led the Mitchells to purchase another mare, Rockford Peach, who would become the dam of their stakes-winning $600,000 earner Absinthe Minded, the dam of Secret Oath.

“I really liked Secret Oath when she was born,” said Mitchell. “We sent her to Keeneland (for the September sale), and I think they’re pretty knowledgeable, but they put her in session 5. Her dam had won three stakes races and placed in five graded stakes, the filly was from Arrogate’s first crop, but she was put in session 5. Not a lot of people looked at her so I took her out of the sale the day before she was supposed to go. I thought, ‘If no one wants her, she looks just like her mom and sister so I will race her myself.’”

In the Arkansas Derby, Secret Oath was bothered at the break and shuffled back, forced six-wide at the three-eighths pole, and made a huge mid-race move only to flatten out in the final furlong. She was beaten 3 ½ lengths by the winner, Cyberknife.

Despite her defeat in the Arkansas Derby, Secret Oath remains one of the top choices for what could shape up to be one of the most competitive Kentucky Oaks races in recent memory.

“What ultimately means something is the finish line at Churchill Downs.”