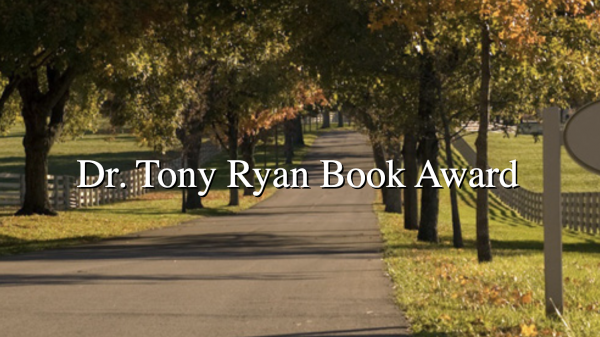 Six semifinalists for the 16th annual Dr. Tony Ryan Book Award have been selected by a panel of judges and were split evenly this year between fiction and non-fiction. These semifinalists were chosen from nearly two dozen submissions, a healthy indicator that interest in horse racing remains very much alive despite the crippling effects of a two-year global pandemic.

With a $10,000 winner’s prize, this competition has been one of the most lucrative in all of publishing. It was launched in 2006 by the late businessman and philanthropist Dr. Tony Ryan as the Castleton Lyons-Thoroughbred Times Book Award to acknowledge the best of race-writing in book format. Although Dr. Ryan lost a battle to cancer a year later, his son Shane has since carried on, changing the competition’s name to honor his father.

Three finalists will be announced via press release in June and a winner will be crowned on Nov. 3 at a by-invitation winner’s cocktail reception to be held at the Ryan family’s Castleton Lyons farm near Lexington.

Following is a brief synopsis of the six semifinalists for books published in the 2021 calendar year, listed alphabetically by title.

“Death by Equine,” by Annette Dashofy

This fictional mystery is about a young racetrack veterinarian named Jessie Cameron who fills in for her vacationing mentor, only to be faced with his sudden and startling death. On the surface, it appears a tragic accident — that he met his end when struck down by a horse he’d been treating — but Cameron believes otherwise. She launches her own investigation and along the way, uncovers an assortment of illicit activities, suspicious characters, and deceitful friends, until ultimately finding herself the target of a killer.

Good things can come in small packages, as the protagonist of this slender volume proves. Written and illustrated by J. M. Chodkowski, Dinky Becomes a Racehorse is a charming children’s tale about a very unique colt blessed with speed and stamina, but who did not look like other horses on the farm. Readers follow his journey to become the racehorse he was meant to be.

“Head to Head, Conversations With a Generation of Horse Racing Legends,” by Lenny Schulman

Head to Head is a compilation of highlights from interviews conducted through the years with racing legends and insiders by Emmy Award-winning writer Lenny Schulman. The longtime journalist prompted revealing commentary from his subjects, including Secretariat’s owner, Penny Chenery; Paul Reddam, owner of dual classic winner I’ll Have Another; and Arthur Hancock III of the famed Kentucky racing family. It’s an engaging oral history that provides readers an opportunity to learn from some of the best.

“Racetrack Rogues, One Woman’s Story of Family, Love, and Loss in the Horse Racing World,” by Dawn LeFevre

Another work of fiction, Racetrack Rogues is a story of loss, love, and redemption. The protagonist is Dahlia Leggett, a young woman whose estranged mother had spearheaded the female jockey movement of the 1960s. Following her mother’s untimely death, Dahlia renews her own passion for racing with help from her grandparents, a rag-tag stable of quirky horses, a bulimic jockey, and the handsome son of a rival trainer. Sparks fly and mystery ensues.

“Run With a Mighty Heart,” by Jennifer Morrison

This is the true comeback tale of a modestly-bred, one-eyed champion and an owner recovering from life-shattering loss. In September 2020, a year stunned by COVID-19, Mighty Heart was just a maiden winner when he lined up for Canada’s classic Queen’s Plate. The aptly-named colt, who had lost his left eye due to injury as a foal, carried the dreams of owner Larry Cordes to a smashing 7 1/2-length victory that day, giving hope to a world in dark times that fairytales can, indeed, come true.

“The Magic of Horses,” edited by Joe Clancy and Nina Gardner