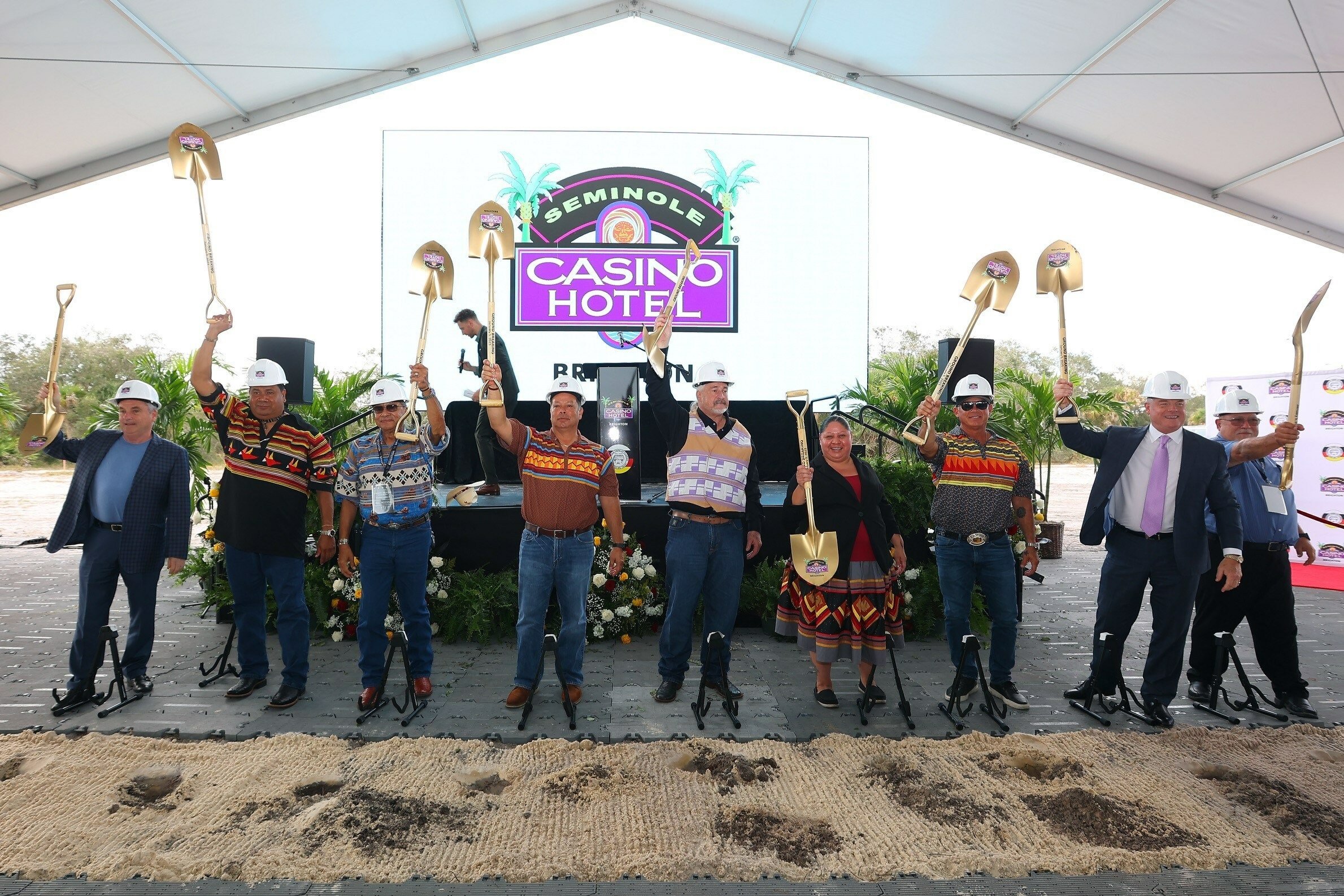 Seminole Chairman Marcellus Osceola Jr, fourth from left, at Thursday’s groundbreaking ceremony on the Brighton reservation. The original Brighton property was the second gaming facility of what is now a multibillion-dollar casino empire. (Seminole Tribe of Florida)

The project will replace the existing Seminole Casino Brighton, which has been operating three miles to the south of the new development since 1980. The tribe said in a news release it expects to complete the project in late 2024.

The new casino will house 38,000 square feet of gaming floor with 623 slot machines and 18 tables for blackjack and baccarat, as well as several restaurants and eateries.

Unlike the existing casino, it will include a hotel – the first on the Brighton reservation – with 100 guest rooms. The hotel will feature a fitness center, a 1,500 square-ft pool with and a 12,500 square-ft pool deck, and an eight-lane bowling alley.

There will also be a 900-seat indoor event space, plus an outdoor stage for concerts and comedy shows that will accommodate an audience of 3,000.

Seminole Chairman Marcellus Osceola Jr., said in a statement that the groundbreaking represented a “major economic step forward for the Seminole Tribe of Florida and the entire Lake Okeechobee region.”

The Seminoles believe the new property will increase the number of tourists to the area.

In 1979, the Seminoles were the first Native American tribe to open a high-stakes bingo hall on their reservation, the Seminole Classic. Despite attracting heat from the local Sheriff’s Office, it was a success.

The Brighton facility followed a year later when bingo tables were added to a red barn that also housed a hardware store and beauty parlor.

Over the years, the 50-ft-by-35-ft Brighton property, once manned by eight people, was enlarged and renovated. Its current size of 27,000 square feet is smaller than the gaming floor alone of the new development.

The Seminoles eventually won their battle with law enforcement. In 1981, a federal court agreed that the state could not enforce its bingo laws on Seminole sovereign land.

This prompted tribes elsewhere to follow the Seminoles’ example, notably in California. In 1987, the Cabazon Band of Mission Indians won a landmark case against the State of California in the Supreme Court.

A year later Congress codified the ruling in the Indian Gaming Regulatory Act, and the tribal casino market was born.

Since then, the tribe’s casino operations have become among the most successful in the world. It owns six casino resorts in Florida under the Hard Rock brand, which it acquired in 2007, as well as casinos in Atlantic City, Biloxi, Vancouver and elsewhere. Most recently, it acquired the world famous Mirage on the Las Vegas Strip.