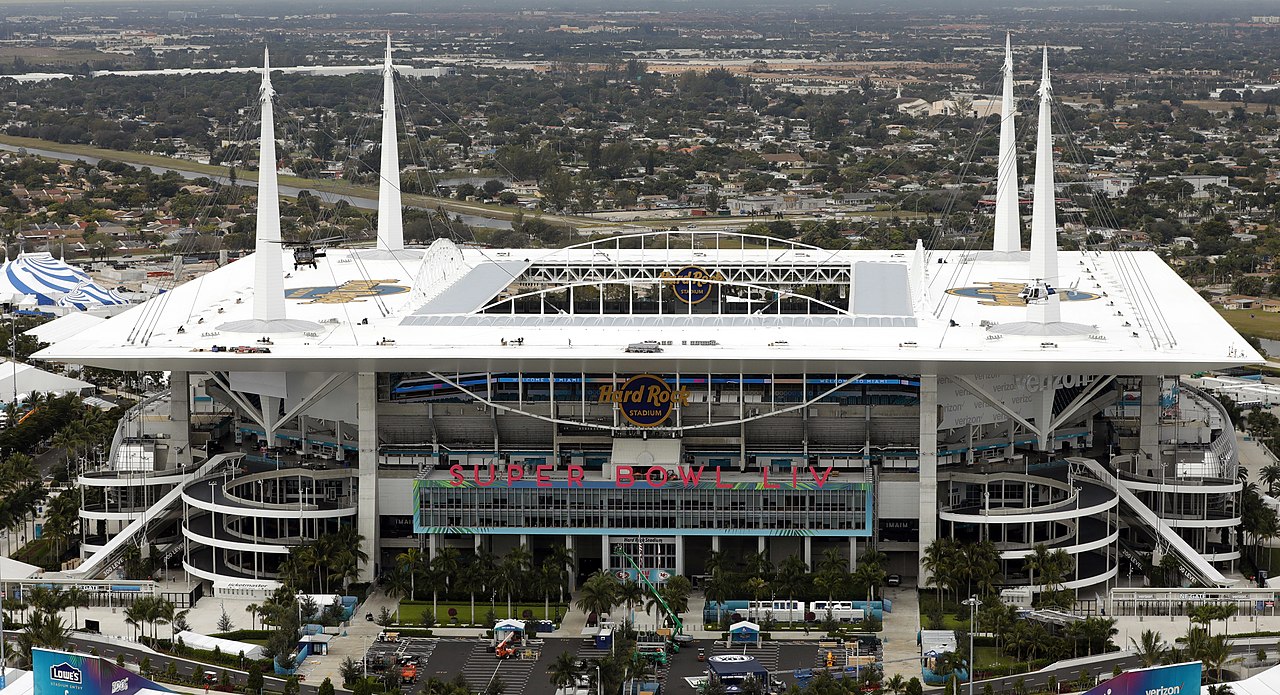 The Seminole Tribe of Florida pulled the plug on its Hard Rock Sportsbook mobile app in the state on Saturday. The move came less than 24 hours after a second federal court in as many weeks denied the tribe’s request to continue offering mobile sports betting in Florida as it appeals a judge’s order that invalidated the gaming compact that allowed it.

An aerial view of Hard Rock Stadium in Miami Gardens, Fla., in January 2020 as preparations were underway for Super Bowl LIV. On Saturday, the Seminole Tribe of Florida temporarily suspended its Hard Rock Sportsbook mobile app in the state after a federal court denied the tribe a stay on a court order invalidating the state’s amended gaming compact with the tribe. (Image: US Customs and Border Protection)

In a statement, Seminole Tribe spokesperson Gary Bitner called the move a temporary suspension. In the meantime, account balances for existing Florida customers will be refunded upon request.

Despite the decision, the Seminole Tribe looks forward to working with the State of Florida and the U.S. Department of Justice to aggressively defend the validity of the 2021 Compact before the Appeals Court, which has yet to rule on the merits of the 2021 Compact,” Bitner said.

The Hard Rock Sportsbook app continued to take bets in the Sunshine State after US District Judge Dabney Friedrich ruled last month in favor of two Florida parimutuel operators that sued the federal government after it allowed the gaming compact between Florida and the Seminole Tribe to take effect.

In an affidavit to the appeals court, Seminole Tribe Chairman Marcellus Osceola Jr. estimated the company invested more than $25 million to launch the sportsbook last month and expected to spend another $20 million before the end of the year.

The Seminole Tribe is not an official party in the lawsuit filed by the Magic City Casino and Bonita Springs Poker Room. Those two businesses sued Interior Secretary Deb Haaland and the US Department of the Interior in August after federal officials did not issue a decision on the amended compact after a 45-day review period. That meant the compact was considered approved to the extent to adhered to the Indian Gaming Regulatory Act.

Magic City and Bonita Springs sued because they said the provisions giving the tribe exclusive statewide sports betting rights violated the federal law because tribal gaming is only allowed on tribal lands.

The tribe did seek to intervene at the federal district court level in an effort to get the case dismissed, but Friedrich denied that request as well.

Even with the legal setbacks over the last couple of weeks, Bitner said the tribe remains confident it will prevail.

“The Seminole Tribe of Florida, the State of Florida and the United States have all taken the position that the 2021 Compact is legal,” he said.

Besides sports betting, the amended gaming compact also allowed the Seminole Tribe to offer dice games and roulette at its casinos.

In the affidavit, Osceola said the state hired “scores of employees” and purchased gaming equipment needed to offer those new games. Other workers have been added because of the sportsbook, the chairman said.

Those jobs as well as positions at Hard Rock vendors would be lost if the compact was nullified, he added.

The gaming compact called for the tribe to give revenue payments to the state. The first two payments of $37.5 million were made in October and November.

Other Expanded Gaming Efforts in Florida

Even if the Seminole Tribe comes up unsuccessful in its effort to get the compact reinstated, other opportunities to legalize sports betting in Florida exist.

DraftKings and FanDuel have been working on a petition drive to get a measure before Florida voters on next year’s ballot that would legalize sports betting.

However, Politico reported last week that the Seminole Tribe is paying firms to disrupt the petition-gathering process for the DraftKings-FanDuel initiative and a separate casino measure backed by Las Vegas Sands Corp.

The news site reported that among the steps the Seminole Tribe has taken to hinder outside efforts include giving buyouts to workers who were gathering signatures for those petitions.

The leader of one signature-gathering firm added that Seminole-supported firms have used aggressive tactics against other workers, including smacking a clipboard out of a worker’s hands.

LVS has even filed a lawsuit over the situation.

Bitner told Politico that the tribe opposes the measures but would fire anyone who acts inappropriately on its behalf.