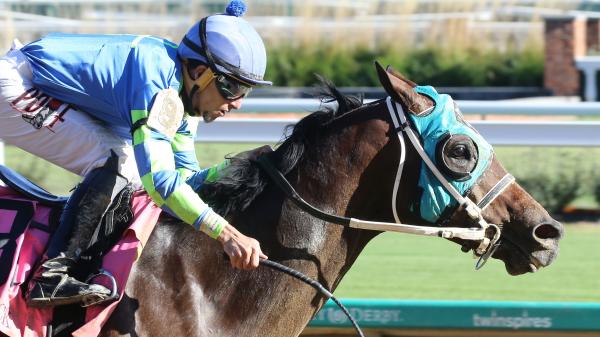 Senor Buscador’s uncommon path from New Mexico to the Breeders’ Cup World Championships is a testament to the patience and determination of the Peacock family that bred and races him.

The Peacocks have endured more than their share of heartbreak during their decades-long pursuit of graded-stakes success. Joey Peacock Sr. thought he had finally reached great heights in 2018 when Runaway Ghost won the Grade 3 Sunland Derby at Sunland Park to secure enough points to qualify for the Kentucky Derby Presented by Woodford Reserve. In mid-April, a few days before the colt was to ship to Churchill Downs, the 3-year-old exited a workout with a fractured cannon bone in his right front leg. Peacock Sr. was 86 when he received that crushing phone call from trainer Todd Fincher. His Derby dream never would be fulfilled. He died two years later, but not before making his mark on this year’s Breeders’ Cup.

The small breeder had elected to send his mare, Rose’s Desert, to Ghostzapper in producing the talented but star-crossed Runaway Ghost. Before his death in September 2020, he arranged for Rose’s Desert to be bred to the great Mineshaft. It would be his final decision as a breeder – and his best.

“He enjoyed a lot of things,” said Joey Peacock Jr., “and his horses was one of them at the top.”

It would have meant so much to the patriarch of the Texas-based family to see what a strong runner his last mating created. Senor Buscador, after overcoming a series of hurdles, earned an automatic fees-paid berth in the Big Ass Fans Breeders’ Cup Dirt Mile with an impressive 1 1/4-length win in the Grade 3 Ack Ack Stakes Oct. 1 at Churchill Downs.

That breakthrough meant everything to the connections. It marked only the second graded-stakes victory for the Peacocks and for Fincher. It brought a tremendous breakthrough for  jockey Francisco Arrieta, who had never triumphed in a graded stakes race.

“It’s unbelievable,” Fincher, 51, said of being Breeders’ Cup-bound. “We don’t get those quality horses here. We just have to develop them. It’s not only me. It’s everybody else in New Mexico.”

Fincher gained a second Breeders’ Cup starter when Slammed won the Grade 2, $350,000 Thoroughbred Club of America Stakes Oct. 8 to secure a fees-paid spot in the starting gate for the Breeders’ Cup Filly and Mare Sprint.

The Peacock’s belief in Fincher runs deep. “It is a challenge to get to the bigger venues when you start out in New Mexico,” Peacock Jr. said. “But Todd has a great crew. And, if the horse has the ability, he makes it work.”

It is possible few other trainers would have gotten this far with 4-year-old Senor Buscador, a rough Spanish translation of Mr. Prospector that honors his lineage. After an eye-catching start to his career, Senor Buscador suffered considerable adversity.

Senor Buscador won his debut on Nov. 6, 2020, at Oklahoma’s Remington Park. He followed that a month and a half later with a dazzling last-to-first, 5 ¾-length rout in the Remington Springboard Mile, prompting substantial purchase offers that were rejected.

That confidence in Senor Buscador was tested when he finished a lackluster fifth in the Grade 2 Risen Star Stakes Presented by Lamarque Ford, part of the Road to the Kentucky Derby, the next February. Tests revealed an ankle chip that required surgery. As was the case with his half-brother, the run for the roses remained only a dream.

Once the sophomore recovered from ankle surgery, Fincher targeted the Zia Park Derby toward the end of the season. That was not to be, either. The morning after a storm swept through last October, the trainer arrived to find that Senor Buscador, possibly spooked by the severe weather, had injured his hock in a stall accident.

“It’s a punch to the gut every time something like that happens,” Fincher said. “It’s been really hard to take, but the Peacocks have been great. They’ve done everything you’d want an owner to do.”

Peacock Jr., in turn, saluted Fincher. “The thing I love about Todd is he will absolutely not do anything that is not in the best interests of the horse,” he said. “Todd said, ‘We’ve got to stop, give him some time off and we’ve just got to work through this.’ That’s what we did. Thankfully, our patience and Todd’s perseverance paid off and we got the horse back in great shape.”

Senor Buscador did not begin his 4-year-old season until July 3, when he won an allowance race at Lone Star Park. Due to extreme heat in Texas that took its toll on him, the decision was made to ship him to California to run at Del Mar.

Again, nothing seemed to go his way. He lost a shoe at the start of the Grade 2 July 30 San Diego Handicap and wound up a distant eighth. He performed much better in taking third in the Grade 2 Pat O’Brien Stakes, leading to the decision to shift him to Churchill Downs for the $300,000 Ack Ack.

The horse signaled his readiness with a bullet five-furlong work in 58.20 seconds, swiftest of 19 at the distance, in his final tune-up for the one-mile Ack Ack. Fincher was filled with optimism when he saddled him for the race.

“The way he’s been improving and as good as he’s been doing, that didn’t surprise me at all,” Fincher said of the victory. “What did surprise me was how easy it was for him. He made the lead at the quarter-pole.”

Senor Buscador has won four times in seven career starts for earnings of $376,677. He appears to be peaking at the ideal time.

“We’ve always known how good he was. Things just kept happening,” Fincher said. “He’s finally showing what we knew he could do. Now, he’s showing it to the world.”

The Peacock family will be well represented at the Breeders’ Cup at Keeneland. Peacock Jr. and his wife, Kim, have five children – Tres and twin sister Allye, twins Sarah and Caroline, and Sam. Sam’s wife, Emma, receives credit for providing Senor Buscador with his catchy name.

Peacock Jr. was asked whether his father will be there in spirit. “I know he will be there,” he said, speaking with disarming certainty.