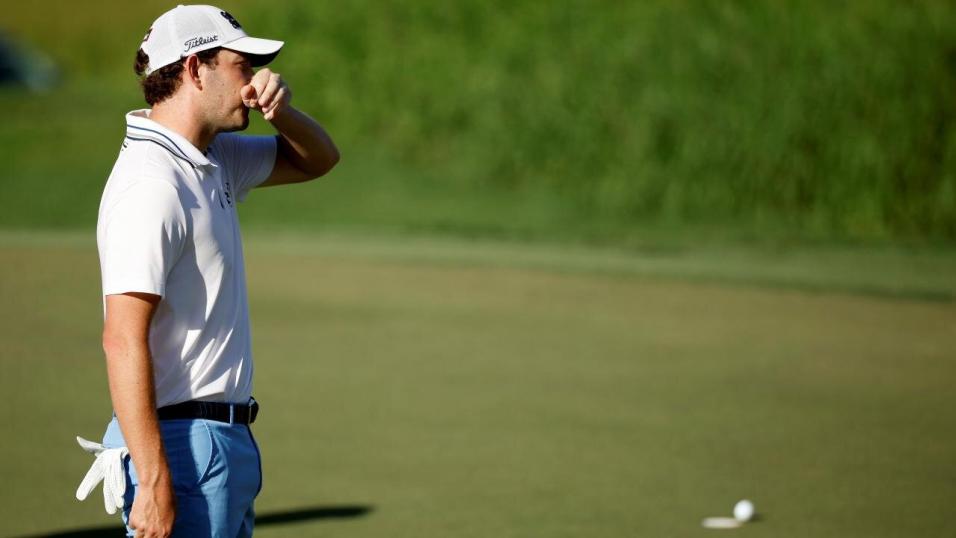 The first-round leader of the Sentry Tournament of Champions, Cameron Smith, bogeyed both the first and second holes of his second round yesterday and he drifted all the way out to 20.019/1 but he bounced back in fine style after that.

Smith was one of four men to eagle the par five fifth and he played his last 15 holes in a remarkable 11-under-par! Here’s the 36-hole leaderboard with prices to back at 11:40.

Looking back over the last 25 years, and concentrating solely on 72-hole events, 77 players have taken a three-stroke lead into the weekend on the PGA Tour and 28 of them (36%) went on to win.

Those stats suggest Smith is a fair price, but his record is only ordinary when leading through two rounds. He went on to win a playoff at the Zurich Classic of New Orleans alongside his partner, Jonas Blixt, back in 2017, after the pair had been tied for the lead at halfway, and he won the Australian PGA Championship from the front in 2018 but on the three other occasions he’s been tied for the lead at halfway he’s failed to convert.

In his defence, his last co-lead through 36 holes was at the US Masters in 2020 (finished second, beaten by five) and on the only previous occasion he’s held a clear lead (one stroke) at halfway, he did go on to win.

Smith’s putting has been the key to his success over the first two days and at the halfway stage, he ranks number one for both Putting Average and Stroke Gained Putting. If he continues to putt so nicely, he’s going to take some catching, especially if his closest challengers continue to putt so indifferently.

Jon Rahm is clearly playing some exceptional golf from tee-to-green (see below) but he ranks 25th for Putting Average and the FedEx Cup winner, Patrick Cantlay, had a really frustrating day on the dancefloors yesterday, missing as many as seven putts inside 15 feet.

Rahm has 34 straight GIR going back to round 1, the longest streak of his PGA Tour career.

? Justin Ray (@JustinRayGolf) January 8, 2022Cantlay shot a neat and tidy six-under-par 66 in round two but the longest putt he made all day was just five-and-half feet.

Daniel Berger’s game is in good order according to the stats. At the halfway stage he ranks first for Driving Accuracy and Scrambling, third for Greens In Regulation and fourth for Putting Average, suggesting he should hang around over the weekend but he was in this position at this stage 12 months ago and he went on to finish tenth!

Looking at the first and second round leaderboards, nothing much has changed and that’s understandable given how good the scoring is.

The course averaged more than five strokes under-par yesterday so playing catch-up is just about impossible and with very little wind forecasted over the weekend, we need to concentrate on the leaders.

It’s very hard to imagine anyone outside the top-six winning and it’s equally tricky to pick out just who goes on to win but I’m happy to take a tiny chance on Cantlay. His six-under-par round yesterday didn’t reflect just how well he played and if the putter warms back up again today, he could make inroads into Smith’s lead. At almost 8/1, I thought he was fairly priced.

Despite finishing only 17th and 24th in his first two appearances at Kapalua, Cameron Smith has started this year’s renewal of the Sentry Tournament of Champions in fine style, with an eight-under-par 65.

The Australian ended the first day in front but world number one, Jon Rahm, who sits just one adrift of Smith, heads the market. Here’s the 18 hole leaderboard with prices to back at 11:30.

In stark contrast to last year, when he finished the first round tied for the lead with the eventual winner, Harris English, the pre-event favourite and 2020 winner, Justin Thomas, sits tied for last place alongside another former winner, Patrick Reed, and Lucas Glover.

Those three all shot opening one-over 74s with the defending champ, English, the only other man in the 38 strong field failing to break par. All four are already too far back given the benign forecast.

As highlighted in the preview, the 2019 winner, Xander Schauffele, won from off the pace (trailed by six after round one) and Sergio Garcia in 2002 and Stuart Appleby in 2005 both overcame slow starts but every other winner at this venue hasn’t been any further than three strokes off the lead after the first round.

Since Appleby won from off the pace in 2005, 14 of the 16 winners have been inside the top five places and within two of the lead after round one and Geoff Ogilvy, in 2010, was only three off the lead. Kapalua is a very hard place to make up ground and it’s almost impossible when the wind lies down.

These are the best players on the planet, and they are going to keep going low over the next three days so we need to be concentrating on the leaders already.

Smith is the obvious person to start with and as a Sony Open winner that putts brilliantly, his lack of course form was the only negative before the off. He again putted nicely yesterday, and he also played the par fives better than anyone else but I’m happy to overlook him at just 8.07/1.

Cameron Smith: +3.43 strokes gained putting in round 1, currently best in the field.

Smith leads the PGA Tour in strokes gained putting per round (+0.79) since last February’s WGC at Concession.

English was the first – first round leader or co-leader to win in eight years when he took the title 12 months ago so although being up with the pace has been key, being in front this early hasn’t been ideal, and Smith’s record when leading after round one isn’t great either. He’s led after round one three times previously and he’s gone on to finish ninth twice and fifth.

The world number one, Rahm, and the FedEx Cup champion, Patrick Cantlay, are the men to beat according to the market and it’s not wrong.

Rahm has Kapalua figures reading 2-8-10-7 and Cantlay’s form here reads 15-4-13 so both would be winning here for the first time should they go on to take the title and the sponsors will be hoping for the sort of protracted fight to the finish that we witnessed by the pair at the Tour Championship back in September.

Cantlay came out on top on that occasion and he’s probably the value to do so again given the stats suggest he putted better than Rahm yesterday.

Next up in the betting is Daniel Berger, but he’s flattered to deceive here previously. He finished 14th on debut having sat fifth and only three off the lead at halfway, and having finished 11th in 2018, he could only finish 12th 12 months ago, having sat second at halfway.

Collin Morikawa is the next in the betting and he sounded confident that he can improve today but given 14 of the last 16 winners have been inside the top-five and no more than two off the lead at this stage, he’s already up against it and too short at 12/1.

Pre-event pick, Sungjae Im, and Find Me a 100 Winner selection, Kevin Na, are within two of the lead so I’m happy enough with their starts and I’m going to leave the event alone for now.

Rahm and Cantlay are the two to beat but they’re short enough and I’m more than happy to sit on my hands for now.