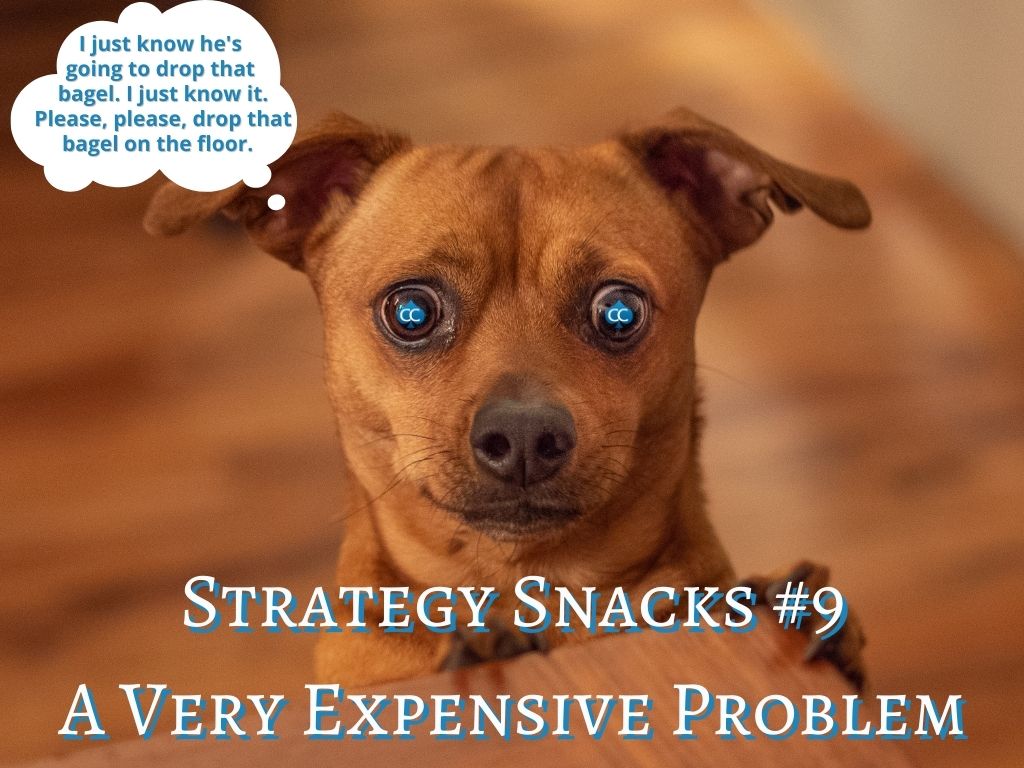 Some Tough Love About Ranges

Welcome to the ninth edition of Strategy Snacks. You may not like this snack, but trust me, it’s good for you. This time we’ll be talking about a range problem that derails the careers of so many would-be crushers — how your psychology affects your range estimates.

I’ve had two students in the last week, and many more over the years, whose mental state affects the ranges they assign to their opponents so drastically that it makes very intelligent people who study really hard into players who are barely winning over the long run. You may think this doesn’t affect you, but it affects all of us, and it’s almost never talked about.

Let’s start with my friend Jim.

Jim is a sharp guy, has a pile of poker books, and gets free advice from me whenever he wants it. Jim is trying hard to be a pro and he’s more than capable of making it happen. But things haven’t always been easy for Jim and, though he’s generally a happy guy, his outlook can be pessimistic when it comes to his own future and abilities. This isn’t rare. In fact, I think it is true of most people who are personable and easy to get along with. Nice guys don’t always finish last, but most of them at least expect to finish in the bottom half. It’s just their nature.

Jim is a tight player and, sometimes, plays on a short bankroll, which makes it even harder for him. His outlook on life and his expectations that things will generally go wrong cause him to put his opponents on tighter ranges than they really have. Jim assumes that tight players have a monster whenever they play a hand with him, and assumes loose players have probably sucked out on him after the flop whenever they put up a fight.

This is a problem because it makes for inaccurate ranges, and it adds an extra level of frustration at the tables. I’ve had students with this problem who consistently start out a session tight, then get tired of folding and shove all their chips in the middle out of frustration in a terrible spot because they are so tired of the imaginary suck outs and coolers. It can be tough to continue to play well if you think you are getting cold decked over and over.

Jim often gives me his range estimates for tight players and it shocks me at how tight he thinks a player is. I trust Jim, and I know he’s a smart guy, so I assume that he just happens to be playing a hand against one of the tightest players ever. Then, at the end of the hand, we often find that the player isn’t as tight as Jim thought.

In a recent hand, Jim raised the button and was called by a tight older player in the small blind. We often refer to this type of player as Old Man Coffee or OMC for short. When I asked for his range estimate on this player he offered something along the lines of “Pocket sixes or better, Ace-Jack, maybe Ace-10 suited.”

I asked if he thought the player would fold smaller pairs or smaller suited aces, which are typically a big portion of a tight player’s range for a flat call from the small blind. He said that the guy was that tight and I took him at his word. Jim ended up folding Ace-Queen on an Ace-high board when the player showed aggression on multiple streets. The small blind showed him Ace-10, and Jim’s frustration level shot through the roof.

The problem isn’t that Jim lacks people reading or range reading skills. He can do those things as well as most players. The problem is that Jim assumes he’s always beat because he expects to lose in hands like this. He remembers his losses more than his wins and he hates to pay people off in big pots.

The truth is, a player who will open-muck a hand like Ace-eight suited or a pair of 4s in the small blind when facing a button raise is almost unheard of these days. Jim’s range estimate was much too tight and it cost him $150, and probably ruined his evening.

Buzz thinks he can steal every pot

On the other end of the spectrum is a student we’ll call Buzz.

Buzz is also a really smart guy who has studied the game extensively. He is very aggressive and very optimistic when it comes to poker, which leads to big swings in both directions, and a table that either fears him or that’s just waiting to stack him, depending on how things play out.

Buzz has had some big upswings and I actually thought that maybe he was so good at his wildly aggressive style that he was making it work at the smaller cash games that he plays here in Vegas. But then a big downswing hit, as it often will with players who play a high-variance style, and the last couple of months have taken a big chunk out of his bankroll.

I’m giving Buzz his next lesson free because I want him to succeed and because I feel like I failed him as a coach. He’s improved a lot during our time together, but I really should have taken a more aggressive stand against his assumption that his style of play would keep working. Some tough love might have helped him avoid this most recent downswing, and that’s my job as his coach.

Buzz assumes that betting is the right play because he expects his opponents to fold much more often than they do. He doesn’t realize that when he’s running over a table, his opponents are paying close attention to him and waiting for the right hand to bust him. He buys lots of small pots and then ends up losing it all back when he runs into a big hand.

Buzz is a nice guy too, friendly and optimistic. That’s part of what led him to aspirations of playing poker for a living. He thinks he can do it, and judging simply by his intellect, he should be right. But if I can’t help him get past his reliance on relentless aggression, he will fail.

It happens to the best of us

We all have inherent biases. If you think you don’t, then you’re in much worse shape than Jim or Buzz because you can’t work on the problems if you refuse to believe they exist. This is a lesson I learned long ago from my old friend Al Schoonmaker. I thought I didn’t have any tilt problem at all because my tilt was so well hidden. I never lost my mind, didn’t throw a computer mouse across the room or sail off for five buy-ins in a cash game. I didn’t curse at my opponents or slam my fist on the table. I always appeared to be in complete control of my emotions.

I spent years believing that I didn’t go on tilt at all, which probably cost me a huge pile of cash. If I’d been honest with myself earlier and worked on the psychological issues that were affecting my game, my win rate would have been bigger, my bankroll would have grown faster, and I might have come out of the first poker boom a wealthy man indeed.

Now that I’m conscious of how my mindset affects my game, and I know that I’m not a perfect poker-playing robot, my win rate is much higher and I handle downswings and bad beats better than ever.

If you want to really get all the vitamins and minerals from this healthy strategy snack, you need to be honest with yourself. Ask others about your range assumptions. If a solid player thinks your opponent might have a very different range than you thought they had, give that some serious consideration. And remember that players are more alike these days than they used to be.

Maniacs just aren’t as crazy as they used to be. Old Man Coffee isn’t nearly as tight as he used to be because the game has gotten a lot tougher and those extreme approaches get destroyed very quickly now. Players who make mistakes are punished much faster than before, and that means they learn faster and they tend to play closer to a correct strategy. Even the worst player at the table has learned a lot and is better than the weak players of 10 or 20 years ago.

One simple exercise for those of you who may suffer from an extreme case like the ones affecting Jim and Buzz is to take the range you assume a player holds, and pick a new range that is directly between that range and what your range would be in that spot. This prevents you from assigning extreme ranges and also accounts for the fact that even a maniac tightens up sometimes, and that even the oldest grumpiest nit in the room sometimes mixes it up with a less premium hand.

Now chew on that for a bit. It’s a big snack and there’s a lot to digest.