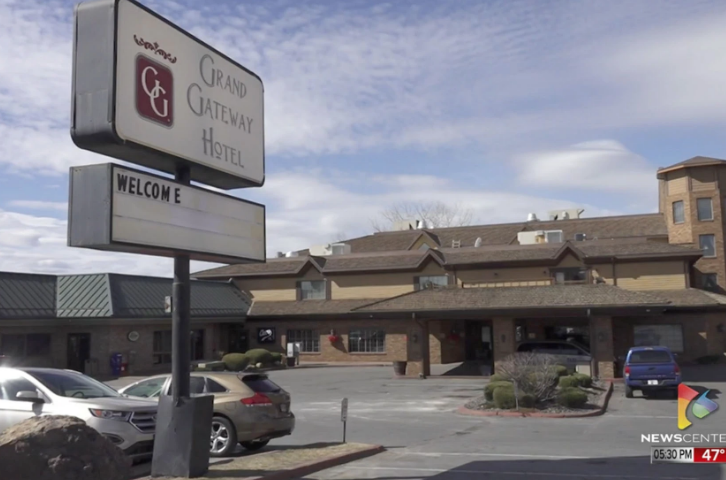 The owner of South Dakota’s Grand Gateway Hotel and the property’s Cheers Sports Lounge and Casino was named in a new government lawsuit. The feds claim the hotel and casino will not provide access to Native Americans who tried to stay at the property.

A sign in front of South Dakota’s Grand Gateway Hotel, pictured above. The sign says “welcome.” But a new lawsuit by the federal government says Native Americans were anything but welcome to the hotel, lounge, and casino. (Image: KNBN)

The defendants’ actions are a violation of Title II of the federal 1964 Civil Rights Act, the court action further claims. The suit, including a seven-page complaint, was filed on Wednesday in South Dakota federal court.

The lawsuit was accompanied by sharp rebuke by federal officials.

Policies that prohibit Native Americans from accessing public places are patently offensive, racially discriminatory and have no place in our society today,” US Assistant Attorney General Kristen Clarke, who heads the Justice Department’s Civil Rights Division, said at a press conference on Wednesday.

“By putting in place a policy that renders Native Americans to second-class citizens, defendants have clearly run afoul of our public accommodations law,” Clarke added.

Restricting access to a hotel based on a person’s race is prohibited by federal law, concurred US Attorney Alison J. Ramsdell of South Dakota.

“We are called to ensure that individuals are treated equally at public accommodations in South Dakota,” she added in a statement. “We are committed to protecting that fundamental right for Native Americans.”

On March 20, Connie Uhre told other Rapid City hotel owners and managers that she did “not want to allow Natives on property… The problem is we do not know the nice ones from the bad natives…so we just have to say no to them.”

Also, she posted a statement in a thread on her Facebook account that “We will no longer allow any Native American [sic]” in the Grand Gateway or in the Cheers Sports Lounge and Casino.”

Also, on March 21 and March 22, the defendants allegedly turned away Native Americans who tried to book rooms in the hotel.

On March 21, Sunny Red Bear, a Rapid City resident who is a member of the Lakota from the Cheyenne River Sioux Tribe, was told by an employee that “locals” weren’t allowed at the property, Indianz.Com, a Native American news site reported. The tribal member tried to rent a hotel room at the Grand Gateway.

Then, on March 22, representatives of NDN Collective, where Sunny Red Bear is the director of racial equity for the Native American advocacy organization, also tried to book rooms at the hotel. They, too, were denied the rooms, the report said.

Nicholas Uhre then appeared in the hotel booking area. He demanded to know if those trying to book rooms were associated with the NDN Collective.

When they responded that they were, Mr. Uhre demanded that they leave the hotel and then followed them out,” the complaint revealed.

In March, NDN Collective filed a civil rights class action lawsuit against Grand Gateway for its “racist and discriminatory treatment of Native people.”

“This isn’t an Indian problem, this is a white supremacy problem, and it shows up in businesses like the Grand Gateway Hotel and in city council, too,” Sunny Red Bear was quoted by Indianz.Com.

Connie and Nicholas Uhre denied discrimination when responding to the NDN Collective lawsuit, the report said. They accused the group of defamation, trespass, and of being a “nuisance.”

As a result of NDN Collective’s wrongful conduct, Retsel Corporation and Nick Uhre have suffered damages in an amount to be determined at trial,” a legal counterclaim alleged.

A fatal shooting took place in March 19 in one of the hotel rooms. Both the suspect and the victim were Native American.