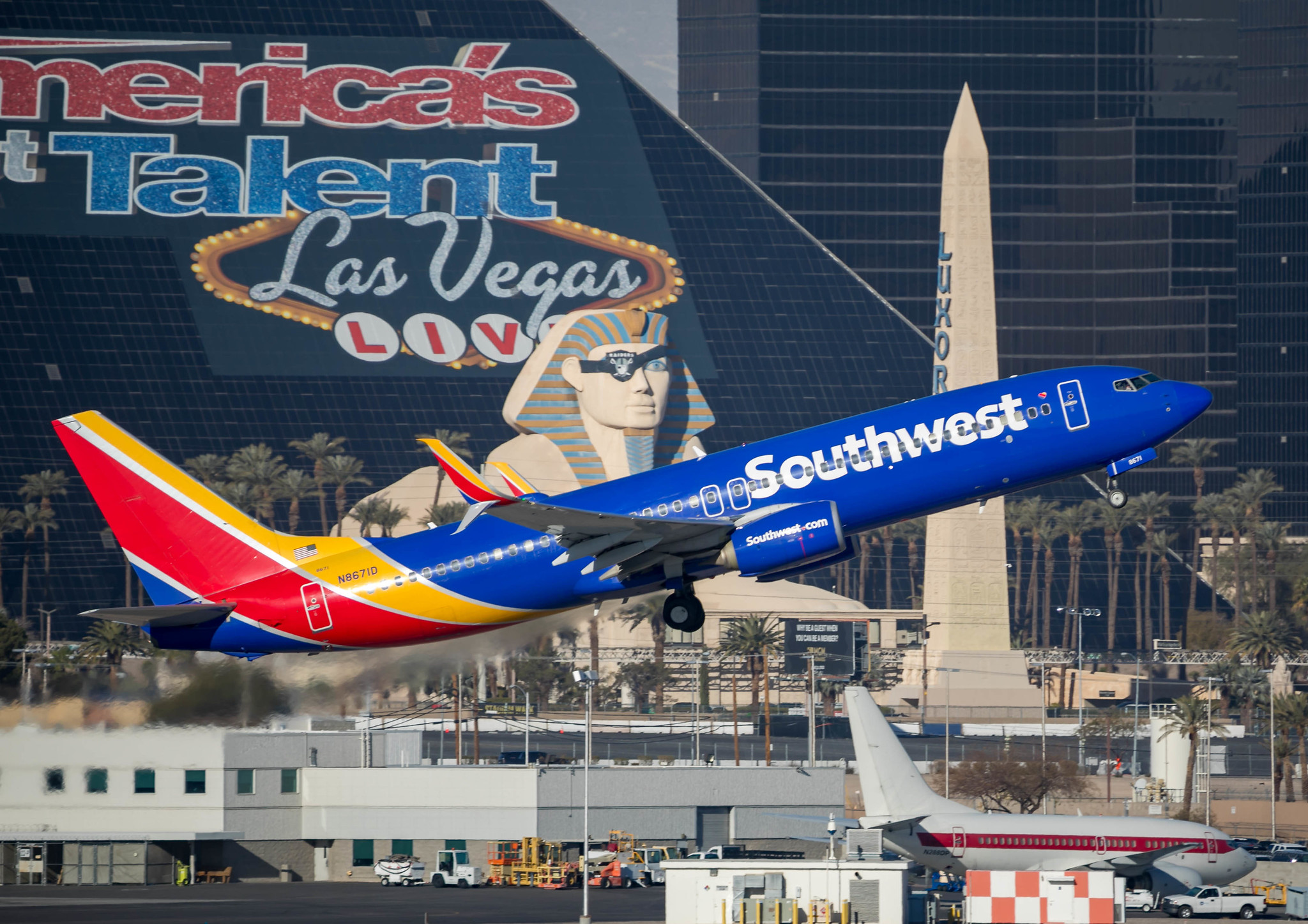 Wanna get away? If you’re supposed to fly with Southwest Airlines this week, the odds are likely against you.

A Southwest Airlines flight departs from Harry Reid International Airport in February of this year. On Monday, the low-cost carrier canceled thousands of flights nationwide as it faced “operational challenges.” (Image: Frank Kovalchek/Flickr)

Travelers on the low-cost airline voiced their displeasure Monday as they were left stranded in airports thanks to Southwest’s mass cancelations. Many complained their flights were canceled with no notice, and they also could not reach anyone in customer service.

On Twitter, some customers have used the tagline “#SouthwestStoleChristmas” to express their outrage.

Nationwide, more than 2,900 Southwest flights were canceled Monday, according to FlightAware.

Merry Christmas from @SouthwestAir:
❌ Flight cancelled
❌ Zero notification
☎️ Nobody on the phones
🐍 Lines snaking in every direction
📅 No flights out until Thursday
📅 It’s Monday pic.twitter.com/tC5qlij3uA

As midnight struck to begin Tuesday in Las Vegas, FlightAware reported 2,481 more canceled Southwest flights for Tuesday and 2,474 for Wednesday. Those figures do not include the hundreds of Southwest flights delayed on Monday.

In a statement Monday, Southwest blamed the “operational challenges” on the severe winter weather that hit much of the Midwest and Eastern US over the extended holiday weekend. The airline called the situation “unacceptable” and apologized to its customers and employees.

As we continue the work to recover our operation, we have made the decision to continue operating a reduced schedule by flying roughly one-third of our schedule for the next several days,” the airline’s statement read. “And we’re working to reach Customers whose travel plans will change to offer specific information and available options, also available at Southwest.com/traveldisruption.”

Southwest’s struggles caught the attention of the Biden Administration. The US Department of Transportation issued a statement on Twitter Monday evening saying the scrubbed flights and the “lack of prompt customer service” concerned officials.

“The Department will examine whether cancellations were controllable and if Southwest is complying with its customer service plan,” the tweet concluded.

Even though Winter Storm Elliott did not hit anywhere near Las Vegas, the disastrous storm still impacted the city’s airport.

Still stranded at the Vegas airport (24+ hrs, multiple canceled flights) This is the @SouthwestAir rebooking line. It wraps around and then goes all the way to the end of the room. It also doesn’t move #Southwest #southweststolechristmas #southwestAir pic.twitter.com/OmCCuqLRn9

Southwest is the dominant carrier at Harry Reid International Airport. Data from the US Bureau of Transportation Statistics shows more than 17.2 million passengers flew into and out of Las Vegas on a Southwest plane from October 2021 through September. The 37.1% passenger share was more than 2.5 times the volume carried by the second-ranked airline in Vegas, Spirit Airlines.

Back in September, Southwest announced it would add another dozen flights from the Vegas airport starting in March. That will bring the number of Southwest departing flights to 243 from Sin City.

According to FlightAware, 291 Southwest flights leaving or arriving in Vegas were canceled Monday. Another 195 were already canceled for Tuesday (as of midnight PT) and 191 for Wednesday, with the possibility of those figures climbing as the week continues.

Southwest’s cancelations come at the busiest travel time of the year, with many families jetting off for long vacations or flying home to visit loved ones. They also add to the woes that were experienced last week as Elliott slammed through the country.

This isn’t the first time Southwest has experienced a major shutdown, either. In October 2021, the airline saw nearly 2,000 flights canceled and more than 2,200 flights delayed due to what it called air traffic control issues and bad weather.