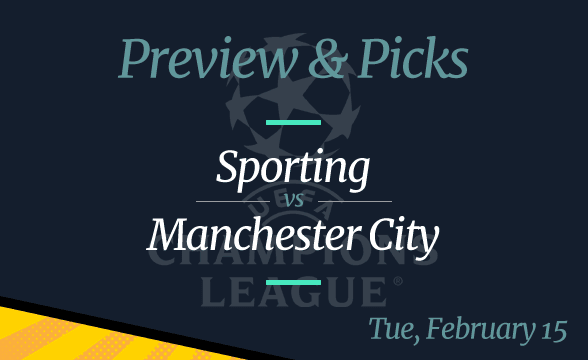 Ahead of the knockout phase of the 2021-22 Champions League, the #1 favorite for the title is Manchester City with the odds of +275. The first obstacle on the Sky Blues’ road to the title is Sporting, which they meet in Round of 16.

This is going to be only the second time Sporting and Manchester City lay in Portugal. Almost a decade ago, the two met in Lisbon and the hosts won. However, a lot has changed since – Man City is now one of the biggest soccer clubs in the world.

Therefore, it’s no surprise that oddsmakers see the visitors as huge favorites this time.

All odds are per FanDuel as of February 14.

Sporting’s Veterans in the Spotlight

Portuguese clubs are famous as talent farms that make huge profits from selling their youngsters to top European teams. In recent years, however, that hasn’t been Sporting’s business plan. Instead of developing young players, this team has decided to focus on more experienced ones.

The result is that in 2022, most of Sporting’s key men are either already in their thirties or fast approaching the 30th birthday.

What this means is that Sporting is a team with plenty of experience, which explains why these guys did well in the group stage of the Champions League. That’s where they played in Group C, together with Ajax, Dortmund, and Besiktas.

They finished the group phase of the competition with a 3-3 record, the same as Dortmund. However, thanks to a better head-to-head score, Sporting finished above the German heavyweight. Sporting did lose to Dortmund in Germany (1-0), but they demolished Dortmund at home.

The final score was 3-1, with two goals by Pedro Goncalves, who also made one assist. The playmaker has been their best player this season. Unfortunately, we might not see him on the pitch on Tuesday – Goncalves picked up a muscle injury a week ago.

Since Sheikh Mansour bought Manchester City in 2008, this club has won the Premier League on five occasions. It’s very likely that the Sky Blues are going to win the Prem once again – they currently have 9 points more than the second-placed Liverpool.

They’ve been doing great in the EPL, but they’re still without a Champions League title. They did come very close to winning it, but in 2021, Thomas Tuchel’s Chelsea beat them in the final.

The Sky Blues have another chance to get ahold of the trophy this year, and this time, they’re taking things even more seriously. Their manager Pep Guardiola has no intention of letting the players lose their focus. He’s going to make them play top soccer in every single Champions League game.

This includes the one played on Tuesday, in which the Sky Blues will go all-in. And when they go all-in, they usually win big.