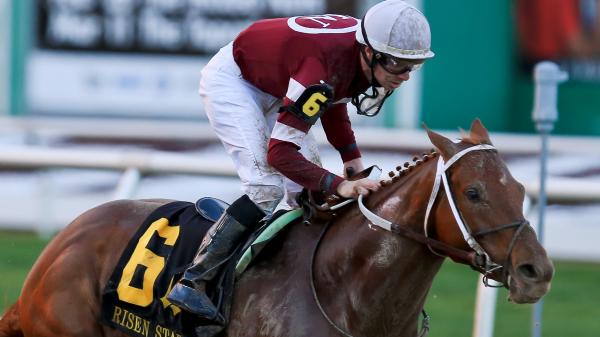 This marks the latest edition of “Stackin’ Cheddar: Looking Back,” a new biweekly series on America’s Best Racing. Here, we’ll look back on an early race in the careers of some of the greatest horses of all time, including spots where they went off at a big price.

Although Gun Runner showed some promise as a 3-year-old, it was as a 4-year-old where he showcased his best. He won four consecutive Grade 1 races that year, culminating his season with a Horse of the Year-clinching victory in the 2017 Breeders’ Cup Classic. A few months later, he capped off his career in style by winning the 2018 Pegasus World Cup Invitational.

Almost two years prior, Gun Runner started down the road to glory in his 3-year-old debut, the 2016 Risen Star Stakes at Fair Grounds. Prior to the Risen Star, he had won his first two career starts before ending his 2-year-old season with a fourth-place performance in the Kentucky Jockey Club Stakes. Bettors were unsure what to make of the Steve Asmussen trainee, and sent him off as the 5.10-1 third choice in the 11-horse field. Airoforce, who beat him in the Kentucky Jockey Club, was the 1.70-1 favorite.

Jockey Florent Geroux kept Gun Runner in hand early on, rating him a few lengths off a fast early pace. As the field rounded the far turn, Geroux made his move up the inside, then angled Gun Runner into the two-path for a clear shot at the lead. Longshot early leader Candy My Boy put up some resistance, but Gun Runner pulled clear late and won by a half-length over a late-closing Forevamo.

Gun Runner was a very consistent sort for the rest of the year, winning two stakes races from his next seven starts (including the Grade 2 Twinspires.com Louisiana Derby next out) while missing the board just once in that span. In his final start of the year, he earned his first Grade 1 win in the Clark Handicap as the 2.10-1 favorite. That proved a breakthrough win and a springboard to his amazing 2017 season.