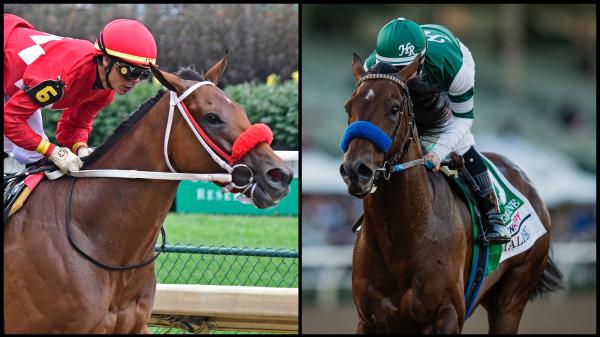 Saturday’s Belmont Park card is headlined by the third jewel of the Triple Crown, the Belmont Stakes Presented by NYRA Bets. However, the Belmont is far from the only marquee race on the program. The card features eight additional stakes races, including seven Grade 1 events.

Three of those races have extra prestige. They’re part of the Breeders’ Cup Challenge “Win and You’re In” series, which ensures the winners of a spot in the starting gate at the Breeders’ Cup World Championships at Keeneland Race Course on Nov. 4-5. All three races feature high-quality fields and should provide plenty of exciting action.

Five of the top fillies and mares in the country will square off in this race, with a spot in the Longines Breeders’ Cup Distaff on the line. The race is scheduled as the seventh on the Belmont card, with a listed post time of 3:05 p.m. ET.

The morning-line favorite at 6-5 odds is last season’s champion older female Letruska. She won last year’s Phipps by 2 ¾ lengths, one of six graded stakes wins for her in 2021. Her season ended with a disappointing 10th-place finish in the Distaff, but she’s bounced back with two graded stakes wins to start her 2022 season. The 6-year-old mare by Super Saver will break from post-position one with regular rider Jose Ortiz aboard.

The second choice at 5-2 is last year’s Longines Kentucky Oaks winner Malathaat. She made her season debut in the Baird Doubledogdare Stakes at Keeneland last out, and rallied in the last few strides to win by three-quarters of a length. She’ll be ridden by John Velazquez from post-position three.

Bonny South, second in last year’s Phipps; Clairiere, who was second in the Grade 1 Apple Blossom Handicap behind Letruska last out and won the Cotillion Stakes last year; and Search Results, who won the Ruffian Stakes at Belmont in her most recent start, round out the field.

A full field of 13 was entered for this six-furlong grass dash. Post time for the race is scheduled for 3:53 p.m. ET. The winner will earn an expenses-paid spot in the $1 million Breeders’ Cup Turf Sprint.

Last year’s winner, Casa Creed, has been entered in pursuit of a repeat Jaipur win. He’s won twice on the Belmont Park grass, having also won the Elusive Quality Stakes last year. In his most recent American start, he was eighth in the Fanduel Breeders’ Cup Mile Presented by PDJF at Del Mar last November. He raced in the Middle East twice earlier this year, including a second-place finish in the Turf Sprint Cup at King Abdulaziz Racecourse in Saudi Arabia.

The morning-line favorite at 5-2 is Arrest Me Red for the powerhouse Wesley Ward barn. While Ward has sent many of his stars to England to compete at Royal Ascot next week, he kept Arrest Me Red here in pursuit of his first Grade 1 win. Arrest Me Red has won four stakes races over the past 12 months, including a sharp 1 ¾-length win in the Twin Spires Turf Sprint Stakes Presented by Sysco at Churchill Downs May 6. He’s very likely to show speed from post position five under Irad Ortiz Jr.

Two other stakes winners this year also were entered. True Valour led every step of the way to win the King Leatherbury Stakes at Laurel Park last out in his first start in more than a year. Feargal Lynch comes up from Maryland for the mount for trainer Graham Motion. Scuttlebuzz came from off the pace to win the Elusive Quality Stakes on this track in his previous start on April 30. This New York-bred gelding has won four of his last five starts. Javier Castellano will be in the saddle for trainer Rudy Rodriguez.

The conversation about this race begins, continues, and ends with Flightline. He’s been nothing short of brilliant in his career, having won his three starts by a combined 37 ½ lengths. In his most recent start, he blew the doors off the field in the Grade 1 Runhappy Malibu Stakes at Santa Anita Park. He won by 11 ½ lengths while going seven furlongs in 1:21.37. He’s had some physical setbacks since then, which have delayed his return to the races, but he’s been working strongly and will be almost impossible to beat if he runs his race. In fact, if the track is fast, it’s possible that he’ll break the world record for a mile on dirt of 1:32.24, shared by Dr. Fager and Najran. He’s 3-5 on the morning line and drew post-position one with Flavien Prat aboard.

The second choice at 8-5 is Speaker’s Corner for trainer Bill Mott and jockey Junior Alvarado. He’s won three consecutive graded stakes to start his 2022 campaign. Most recently, he won the Grade 1 Carter Handicap at Aqueduct by 4 ½ lengths in an impressive performance. He’ll break from post-position two.

Last year’s Qatar Racing Breeders’ Cup Sprint winner Aloha West also is in the field. This will be his second start of the year, having finished third in the Grade 1 Churchill Downs Stakes Presented by Ford last out. Jose Ortiz will ride Aloha West from post-position three.

Happy Saver and Informative round out the quintet. The race is scheduled as Race 9 on the card, with a listed post time of 4:43 p.m. ET. The winner will receive a berth in the Big Ass Fans Breeders’ Cup Dirt Mile.