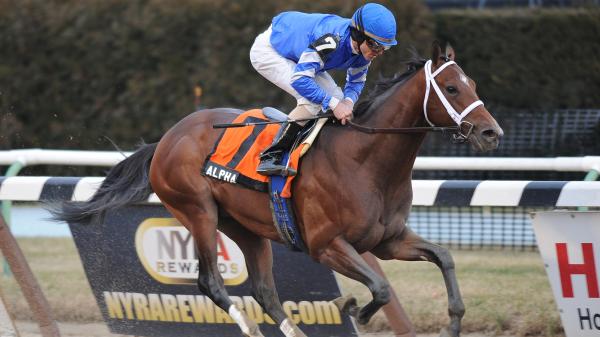 Stars of Yesterday: Looking Back at Some of Best Recent Withers Stakes Winners

The New York road to the Grade 1 Kentucky Derby Presented by Woodford Reserve continues this Saturday, with the 142nd renewal of the $250,000 Grade 3 Withers Stakes. Named after prominent 19th-century owner David Withers, the race was held for the first time in 1874 at Jerome Park. It has been held at several different tracks, but has been run at Aqueduct since 1997.

Historically held in the spring, the Withers was moved to early February in 2012 to serve as a prep for the Derby. It was lengthened from its historic one-mile distance to 1 1/16 miles that year, and was stretched further to 1 ⅛ miles in 2018.

Here, we’ll take a look back at some of the more recent great winners of this race, including three horses who won it during its current place on the calendar.

Trained by Hall of Famer Jimmy Croll, Housebuster looked unbeatable going into the 1990 Grade 3 Withers at Belmont Park. He was a perfect 5-for-5 on the year, winning a slew of one-turn stakes with amazing ease. In the Grade 3 Swale Stakes at Gulfstream Park, he defeated Summer Squall, who went on to win the Preakness, and Thirty Six Red, who was second in the Belmont Stakes.

Despite his dominance, Croll resisted the temptation to try Housebuster at classic distances, figuring that his speed would be much more potent at one mile or shorter. Rather than run him in the Kentucky Derby, Croll entered him in the Withers Stakes five days later. Facing minimal competition, he was pounded to 1-2 favoritism.

He won just like an odds-on favorite should. Craig Perret put him on the lead early, and he never gave it up, coasting to a two-length victory. The final time for the mile was an impressive 1:34 ⅘.

Housebuster was far from finished. Later that month, he led most of the way in the Grade 1 Met Mile before finishing second by a neck to eventual Horse of the Year Criminal Type. He won three more stakes races that year, including a mesmerizing 13-length win in the Grade 1 Jerome Handicap. For his accomplishments, he won the Eclipse Award for Champion Sprinter. In 1991, he won the award again after four more stakes victories.

After Bernardini posted an impressive maiden win at Gulfstream Park, trainer Tom Albertrani decided to take a shot with him in the Grade 3 Withers at Aqueduct in late April of 2006. A field of four showed up, including 3-5 favorite Luxembourg. Bernardini was the 1.85-1 second choice.

Flush with confidence after that win, Albertrani and owner Darley Stable entered Bernardini in the Grade 1 Preakness Stakes, where he was sent off at 12.90-1 odds. Sensing another fast pace developing, Javier Castellano once again rated Bernardini off the leaders, and pounced on the turn. He pulled away to a dominant 5 ¼-length win in a race that was marred by the breakdown of Kentucky Derby winner Barbaro. Later in the year, he added the Grade 2 Jim Dandy, the Grade 1 Travers, and the Grade 1 Jockey Club Gold Cup. He was voted Champion 3-Year-Old Male at the Eclipse Awards at the end of the year.

Alpha became the first horse to win the Grade 3 Withers as a Kentucky Derby prep. He was a heavy 0.35-1 favorite, coming off a win in the Count Fleet Stakes a month prior. After sitting a good talking trip, he moved to the lead on the turn and drew off to a strong 3 ¼-length win for trainer Kiaran McLaughlin and jockey Ramon Dominguez.

At age 4, Alpha added another Saratoga stakes to his résumé, winning the Grade 1 Woodward Stakes in a 7.70-1 upset.

This New Jersey-bred gelding had already made some waves heading into his 3-year-old campaign. After winning the Sapling Stakes at Monmouth Park, he was a surprise second in the Grade 1 Champagne Stakes. He followed that up with another runner-up performance (to eventual Preakness Stakes winner Exaggerator) in the Grade 3 Delta Downs Jackpot Stakes.

Despite his accomplishments, bettors weren’t quite sure about him leading into the Grade 3 Withers Stakes. They preferred Flexibility, who recently won the Grade 3 Jerome Stakes. He was sent off as the 0.55-1 favorite, while Sunny Ridge was the 3.75-1 second choice.

While Flexibility was a flat fourth, Sunny Ridge prevailed. He rated off early leader Vorticity and then moved up to engage him just before the half-mile marker. The two continued their cutthroat battle around the turn and int0 the stretch. Sunny Ridge began to pull clear, and won by three-quarters of a length.

Although a fourth-place finish in the Grade 3 Gotham Stakes next out ended his Derby dreams, Sunny Ridge has gone on to a productive career. He won two listed stakes as a 4-year-old, and added another one at age 5 in 2018. As a 6-year-old in 2019, Sunny Ridge took his first graded stakes win since the 2016 Withers, prevailing the Grade 3 Salvator Mile at Monmouth Park on May 25. He posted five timed workouts in January 2021 and is entered in an allowance optional claiming race for trainer John Kimmel on Feb. 4 at Aqueduct.

After a third-place finish in the Grade 2 Remsen Stakes to conclude his 2-year-old campaign, Tax made his 3-year-old bow in the Grade 3 Withers Stakes. He went off as the slight 2.10-1 favorite in the field of seven for trainer Danny Gargan and jockey Junior Alvarado. He lived up to the billing, stalking pacesetter Not That Brady in the early stages and then winning a stretch battle with that foe and Our Braintrust for a head victory.

Later in the year, Tax won the Grade 2 Jim Dandy Stakes by three-quarters of a length, defeating a strong field that included Preakness Stakes winner War of Will and Belmont Stakes runner-up Tacitus. As a 4-year-old, Tax won the Grade 3 Harlan’s Holiday Stakes at Gulfstream Park, his first race in more than seven months.