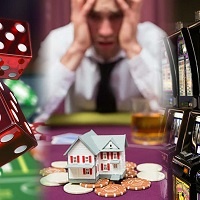 With the rapid spread of betting on sports across our nation, we’ve been worried about the potential for problem gambling. But it’s not just our legitimate concerns for players mental health that has us troubled. It’s also the advertising blitz, sponsorships, media partnerships, and bonus offers that we are seeing everywhere. Not only do they overwhelm, they give gambling opponents the bullets they need to shoot use with.

We actually voiced our concerns over a possible gambling backlash in a video we made back in September, just as football season was kicking off. Our very real fears were based off the current situation in the United Kingdom, where industry haters pointed to advertising campaigns as the sole cause of all evil… and irresponsible players jumped on the bandwagon to blame sports books for their losing streaks.

Sure, some of those players had legitimate problem gambling issues. But with an addiction rate well below 1% in the UK, it doesn’t take a math expert to calculate that many of them were just seeking to recuperate losses from their own irresponsible behavior. They simply jumped on the problem gambling bandwagon, as it was headed in a direction that helped them.

So, here we are in America… and no one seems to be listening to us. That’s okay. We figure the goal of operators right now is to grab as much market share… and make as much money… as possible. At least while things are still in this “wild west” phase. Operators can simply deal with the consequences and backlash later. But make no mistake, there will be a backlash.

The state of Virginia sees this coming. Not only do they regulated sports betting, they were the fastest state ever to reach a billion dollars in handle back in 2021. Now, lawmakers there are pushing to create a committee on gaming addiction, all in an effort to tackle the growing fears of a rise in problem gambling. Bipartisan Delegates have introduced a bill to create this committee, saying “As Virginia moves forward with the expansion of gaming, it’s important that we understand the ills that come with it.”

Ohio sees this coming as well. In fact, just two weeks before the launch of sports betting they had gambling addiction counselors preparing to help the public. Associate Director of the Problem Gambling Network of Ohio, Michael Buzzelli, said they have been doubling the number of training opportunities for addiction counselors. “Not only do we think we’re prepared to tackle addictions… we have strong prevention measures to make sure we can stop them before they start,” he said.

More states are now jumping in. New York just set a new record for sports betting last year, but even they are now considering legislation to restrict some of the promotions of sports betting operators. The governor of Kansas is a huge supporter of regulated sports betting, but is now taking a fresh look at the activity and saying that there may be “unintended consequences.” And in Massachusetts, where sports betting is supposed to launch soon, state regulators are taking a close look at some applications over concerns about media partnerships.

With the growth of sports betting and online gambling, this was bound to happen. There is a certain aspect of society who do not like gambling. Some have legitimate reasons to hate the activity, and some have just appointed themselves as the morality police. But the fact is that problem gambling is real. Perhaps not as prevalent as some would try to make it, and perhaps more prevalent that some operators would like to admit. But as the continued media campaigns go unchecked and escalate, there will come a day of reckoning… and we think it’s coming soon.

If you feel you have a gambling problem, contact Gamblers Anonymous for free.