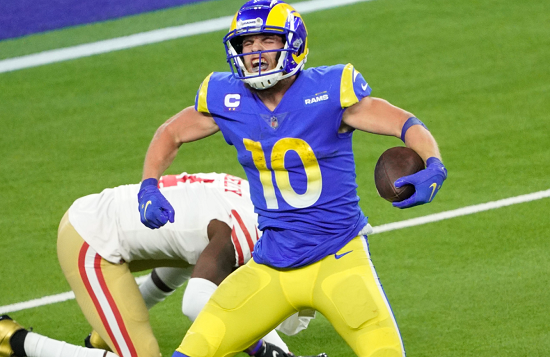 Stay Away from Betting This Team Early

Remember how Cooper Cupp came out of nowhere?

As NFL bettors head into the 2022 season, preparations continue for what hopes to be a strong year for the bankroll. Part of that preparation should include watching out for a few key teams. There is one team, in particular, that bettors should stay away from early this season.

We examine what bettors should be looking for early in the new NFL season and, eventually, identify the one team to stay away from in the first few weeks of the 2022 campaign.

Bettors should have been paying attention to NFL news from training camp and the preseason. Rosters are now finalized and most, if not all, starting lineups are known to the public. Much of the media talk centers on the big-name players, but there are players that burst onto the scene – Cooper Kupp, anyone? – and make a huge impact on a season.

Speaking of the media, remember the sports media world does not exist to help guide bettors and their decisions. Steer clear of bias and use the media for information only. You can get up-to-date injury reports, for example, and weather updates that can impact games. Form your own opinions about the various teams.

One of the most profitable strategies for bettors early in an NFL season is to bet against the public. The recreational bettor loves favorites, star players, popular teams, etc. Oddsmakers know this and smart bettors can take advantage.

The Packers will likely continue to be overvalued with Rodgers at quarterback. They lose WR Davante Adams and didn’t do much to replace him. Sammy Watkins is a good receiver, but not cut from the same cloth as Adams.

The Lions played hard over the last half of 2021 and would up keeping several games close. The problem for Detroit is that they still don’t have the roster to compete. The offensive line is iffy at best. They lack a big-time wide receiver and Jared Goff isn’t going to win any championships. Plus, the Lions are on HBO’s Hard Knocks which is giving Detroit some unprecedented love. Maybe a little too much.

While bettors may want to shy away from Green Bay and Detroit, the one NFL team to fade early this season is the Miami Dolphins. The Dolphins, with new head coach Mike McDaniel, are already favored to beat the New England Patriots in Week 1.

Miami will likely be overvalued early this season with the arrival of WR Tyreek Hill from Kansas City. Somehow, he is supposed to make QB Tua Tagovailoa better. The run game has issues and the defense was average last season and that unit essentially will be the same in 2022.

Here’s the issue for the Dolphins. In Week 2, they are at Baltimore. Week 3 brings Buffalo to town and then the Dolphins travel to Cincinnati for a Thursday night game in Week 4. By then, all of the love will be lost.

Beware of the early season love for Miami and stay away for the first few weeks of 2022.

2022-09-02
Previous Post: Kansas Sports Bets are Off and Running • This Week in Gambling
Next Post: CardsChat Podcast: The Legendary Kathy Liebert