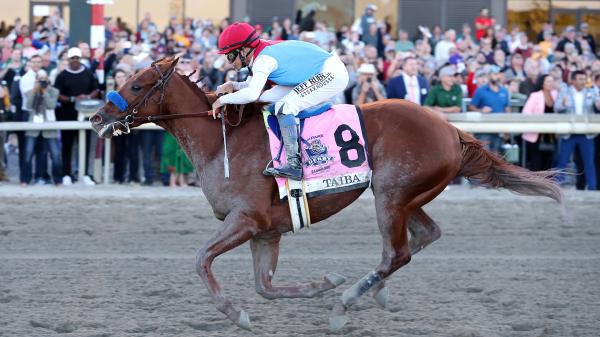 No one can say it’s been a smooth, tranquil 3-year-old season for Taiba. He did not make his first start until March 5 and immediately was playing a game of catch-up with the division’s best sophomore runners.

Within a month Zedan Racing Stables’ son of Gun Runner  was switched to a new trainer. Then he finished 12th in the Kentucky Derby Presented by Woodford Reserve.

Yet outside of those bumps in the road, Taiba has done very little wrong and at the moment stands as the only worthy rival for Epicenter in the race for the 3-year-old championship.

The promise that Taiba showed earlier in the year when he won the Grade 1 Runhappy Santa Anita Derby in just his second start was greatly enhanced Sept. 24 when he took charge at the top of the stretch and cruised to a three-length victory over Zandon in the $1 million Grade 1 Pennsylvania Derby for 3-year-olds at Parx Racing.

“That was exciting. He did it. He ran his race,” said trainer Bob Baffert following his fourth Pennsylvania Derby victory. “He is getting better and better. He is a horse that has been slowly improving. He proved today he is a good horse.”

The victory avenged a stinging loss by a head in the Grade 1 TVG.com Haskell Stakes to Cyberknife, who was third Saturday, and illustrated a new pecking order behind Epicenter in the 3-year-old division.

After the Haskell, Cyberknife was second behind Epicenter in the Grade 1 Runhappy Travers Stakes, some 5 1/4 lengths behind, and Zandon was a nose back in third. On Saturday, they were no match for Taiba, either, with Zandon, who was third in the Kentucky Derby, three lengths behind Taiba and multiple grade 1 winner Cyberknife almost seven lengths back in third.

Now it’s Taiba who stands closest to Epicenter in the division.

“You want to be the best 3-year-old. This was the spot that puts him right there. He is just a tough horse. He is powerful. He is a heavily muscled horse, and you would not think he would run this far. He has speed but he will sit behind horses. He comes running and he is just a fighter,” said Baffert, who was not on hand and had trusty assistant Jim Barnes saddle Taiba.

With the Pennsylvania Derby closing out the grade 1 route races for 3-year-olds, the competition will be greatly enhanced down the road for Taiba with a date against older superstars Flightline and Life Is Good looming in the Nov. 5 Longines Breeders’ Cup Classic at Keeneland.

“If all is good, we are going to point to the Breeders’ Cup Classic. You know, horse racing changes day by day. I’m not looking forward to running against Life Is Good and Flightline. Those are two very fast horses,” Baffert said.

“He had a little bit of a rough trip in the Haskell, but we had some time to get him ready for this one. It was the last chance to run a Grade 1 against 3-year-olds and it was a tough race, a good field. The main thing is that he ran his race,” Baffert said. “Lately he has been very willing. I can see the improvement. Today was his day. I really think he is starting to figure it out.”

Breaking quickly from the outside post in a field of 11, White Abarrio grabbed the early lead in the Pennsylvania Derby, posting fractions of :23.27, :47.21, and 1:11.06. Jockey Mike Smith had Taiba ($4.80), the 7-5 favorite, second early on, then dropped to fourth while saving ground along the inside.

On the final turn Smith tipped Taiba wide and the colt produced a strong surge of speed to grab the lead while racing in the five path in the stretch. He quickly opened a 2 1/2-length at the eighth pole and was not threatened from there, finishing the 1 1/8 miles in 1:48.67.

Zandon, trained by Chad Brown who was the 3-1 second choice, was 10th after a half-mile and rallied along the rail to move into second at the eighth pole but could not gain ground in the final furlong.

Cyberknife rallied wide from eighth to finish third. The son of Gun Runner trained by Brad Cox finished a head in front of Simplification, who held up for fourth after prompting the pace on the backstretch.

“He didn’t seem to really like the track, he was never really on the bridle,” said Florent Geroux, who rode Cyberknife. “He was way farther back than he usually is, kind of throwing his head at the kickback.”

It didn’t matter that jockey Florent Geroux had never ridden Society. One glance at her past performances could tell you that speed was her game. And so when three of the earlier races on the Sept. 24 Parx Racing card were captured in wire-to-wire fashion and four others were sealed with the winners being forwardly-placed, Geroux didn’t hesitate to bring it to them with the fleet-footed Society once the gates opened.

Springing to the early lead, the 3-year-old Peter Blum Thoroughbreds homebred daughter of Gun Runner rolled unchallenged through early fractions of :23 1/5, and 46 3/5 before widening her margin turning for home as she threw down a swift third quarter in 1:10 4/5. Grade 1 Longines Kentucky Oaks winner Secret Oath ran on willingly but couldn’t touch Society, who soared to the wire well in front under jockey Florent Geroux. Morning Matcha rallied up the inside late to best Secret Oath for second. Despite the loss, trainer D. Wayne Lukas confirmed the Longines Breeders’ Cup Distaff was next for Secret Oath. Parx local star Morning Matcha, a four-time winner over the Bensalem strip, turned forth the effort of her career in collaring the Kentucky Oaks winner late for runner-up honors. The Pennsylvania-bred filly, bought for only $18,000 as a yearling, has bankrolled $632,390 in 16 starts.

Society shook off any lingering fears her connections may have harbored about her two-turn ability after finishing fourth behind Nest in the July 23 Grade 1 Coaching Club American Oaks, soaring to the wire well in hand.

“I know if I kept her relaxed (I would win),” Geroux said. “I was content just to keep her off if the pace if it was honest enough, but honestly after three jumps I was already in the lead. I was clear. I felt like I was going nicely, but I wasn’t going crazy. She’s extremely quick. those horses have a ton of speed so the worst thing you can do is try to and get them off rhythm. You want to try and stay the same tempo and keep them relaxed.”

Trained by Steve Asmussen, Society ($17.60) clocked the 1 1/16 miles in 1:42.94. The daughter of Gun Runner took her earnings over the million-dollar mark with her second graded stakes win and improved her overall record to 5-0-0 from six starts to date. She notched her second straight graded stakes score after taking last month’s Grade 3 Charles Town Oaks. — Molly Rollins